Paul Kane students say they like what they see in the plans for their new, bigger school – plans that include solar power, a big cone and an enormous gym. The St.
Feb 16, 2019 12:28 PM By: Kevin Ma 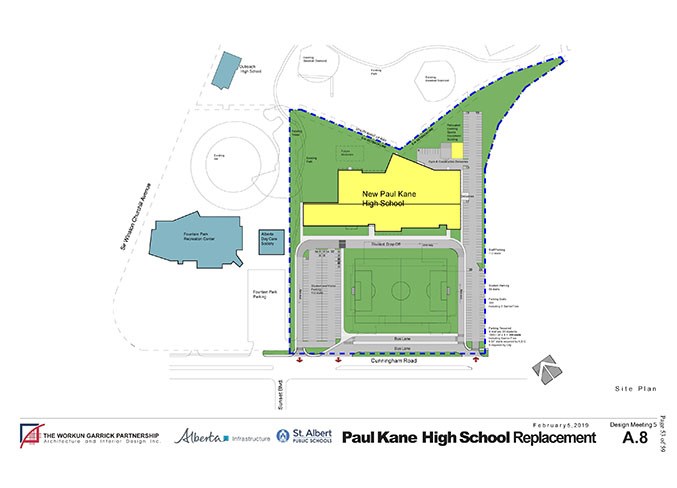 OLD AND NEW – The site plan for the new Paul Kane. The new school will be built directly behind the old one, while the old one will be demolished and replaced with a soccer field.

Paul Kane students say they like what they see in the plans for their new, bigger school – plans that include solar power, a big cone and an enormous gym.

The province announced last March that it would build a replacement school for Paul Kane to accommodate rapid growth in St. Albert’s student population.

The current school dates back to the 1970s and holds about a thousand students. The new one, which will be built directly behind the current one, will hold about 1,500.

Public board and government officials have been working on these plans since November and have them pretty much finalized apart from the school’s external appearance, said board secretary treasurer Michael Brenneis.

“We wanted to create an efficient building,” he said, one that was flexible but still fit within the space the board had to work with.

The Gazette showed the plans to Paul Kane staff and students to get their thoughts on them.

The school appears to have a large window over its main entrance and long lines of glass wrapped around its two floors. There are also many wall-mounted solar panels. There’s a lot of dark grey, white, gold and Paul Kane blue, as well as a structure with many stencils of the Paul Kane logo cut out of it.

Grade 12 Drama student Declan Findlay said the school seemed to have a sleek, modern, university look to it, adding all those windows would really help brighten up a student’s day.

“With 1,500 students, you’re going to get a lot driving,” he noted, and he was concerned there might not be enough parking stalls for them.

Coming in the main entrance, students will see a large central gathering area with many tables that serves as a hangout/cafeteria, Brenneis said. They’ll also notice a two-level cone-shaped breakout room, the shape of which acknowledges Canada’s Indigenous peoples.

Left of the lobby is a line of classrooms and three foods labs. That’s a step up from the two the school has now, which often have 30 students sharing five stoves, noted Grade 12 CTS student Santokh Singh.

Head up the stairs in front of you and you’ll see that most of the school’s classrooms and its university-style science labs are on the second floor. You’ll also have a clear view of the gym, drama, music, library and construction areas, which are open-topped and form an interconnected complex in the middle of the school.

The 1,200-square-metre gym is meant to replace Paul Kane’s big and small gyms and is twice the size of the big one, said Paul Kane principal Duncan Knoll.

“It’s a big, big gym,” he said, and will have plenty of space for major tournaments and events. You can also split it up using mobile partitions.

The Drama room will have retractable seating and a stage, Brenneis said. Students can open a door to use the gym’s change rooms for costume changes, open two to wheel in sets from the construction lab, and head across the hall for makeup in the cosmetology lab, Brenneis said.

Student Alex Richmond noted the new school has dedicated storage space for Drama, which should mean the CTS lab and Drama room won’t be crammed full of props and sets like they are now. The stage area will also give technicians like himself experience they can’t otherwise get outside the Arden Theatre.

Brenneis said the province hopes to start construction of the new school by 2020 and have students in it by 2022.

Findlay said he would probably be “a little jealous” of the students who get to enjoy this new school, “but you just gotta be happy for those generations to come.”

The draft plans can be found in the agenda package for the St. Albert Public School board's Feb. 13 meeting at www.spschools.org/board-agenda.