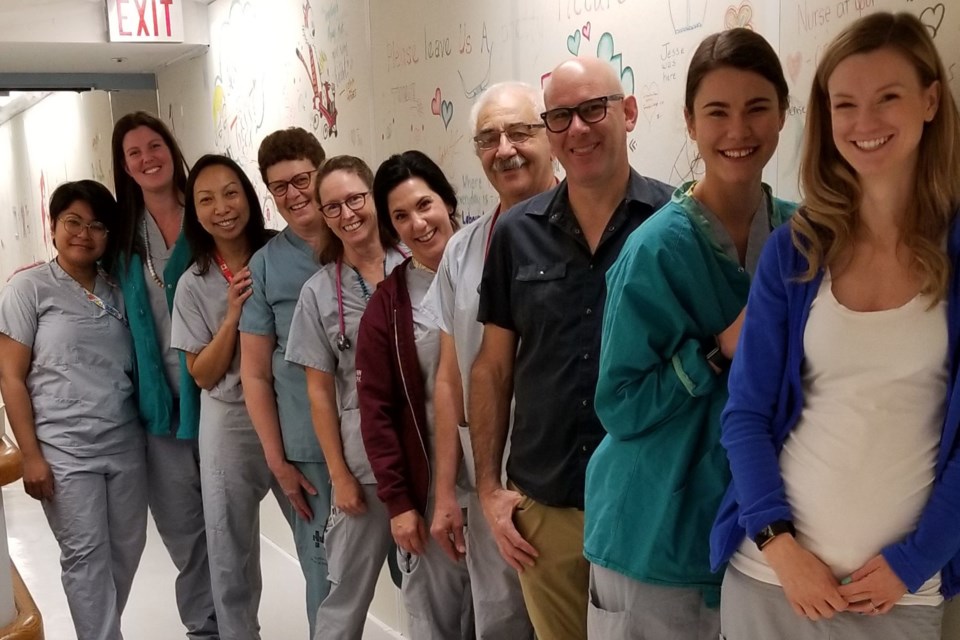 Staff members of Sturgeon Hospital's labour and delivery and neonatal intensive care (NICU) units pose in front of what will soon be the new Stollery Children's Hospital NICU. Families and children drew pictures on the hoarding wall during construction. The unit is anticipated to open this fall.

The $2.3-million six-bed unit will feature “state of the art equipment” and has been under construction since the project was announced in early 2018.

Construction is proceeding according to schedule and the NICU will be open “sometime in the fall,” according to patient care manager for the Stollery NICU at the Sturgeon Hospital, Lisa Lenuik.

“Construction is happening and it's going up really quickly, you see just beams and now they’re all filling in the walls and the celling, and you can actually see where the bathrooms are,” she said. “It’s getting really exciting and things are moving quickly.”

An exact opening date is not available at this time.

The NICU is taking form in what used to be rooms for the labour and delivery unit at the hospital. It will include three rooms, two of which will be private rooms with a bathroom and shower area. The other room will contain a NICU pod of four beds. A play room and kitchenette will also be in the unit.

Having a NICU located right in St. Albert is a long time coming. The Sturgeon Hospital is the only facility in the province surpassing 3,000 births per year with no in-house NICU, Leniuk said. In 2016, 90 babies had to be transferred to another hospital in the region for care.

This sometimes leads to families being split up, when there are no postpartum beds available at the hospital their child is transferred to.

“It’s disheartening and sad to have to talk to a family and tell them their baby needs to go to,” she said.

Funding for the NICU was provided by the former NDP government, through AHS’s infrastructure maintenance program. A further $2.5 million is being fundraised by the Stollery Children’s Hospital Foundation, which will go towards “state of the art equipment” for the unit.

That will include incubators, warmers and ventilators, all of which are specialized for tiny bodies. Additionally, families will be comfortable with heated massage recliners, along with a fridge for breast milk and breast pumps. If parents cannot be at their baby’s bedside full-time, they will also have the option of watching from a 24/7 live feed.

Stollery major gifts officer Nafisa Bowen said the foundation has been working with the St. Albert chapter of the Canadian Progress Club to raise $500,000 of their $2.5 million goal through a mosaic created by local artist Lewis Lavoie.

So far, $140,000 has been raised through the mural campaign, which has three different levels of donations. The top tier includes a tile on the mural that is a personalized portrait, and costs $1,000.

“I think it’s absolutely amazing, I am so excited for the opening, as I know it’s something that the community definitely needs and drives for. I know it will elevate care for so many families that will utilize it,” Bowen said.