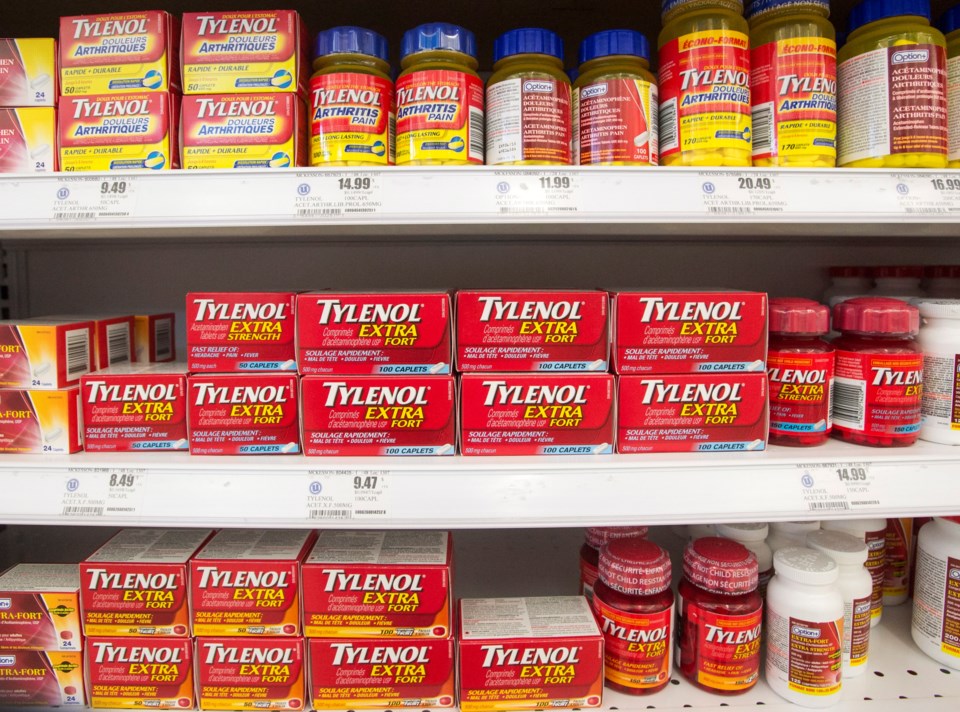 TORONTO — Canadian health officials are trying to calm fears that anti-inflammatory drugs such as ibuprofen can worsen COVID-19 symptoms by stressing the lack of concrete evidence.

Debate over whether ibuprofen products such as Advil should be bypassed for acetaminophen medications including Tylenol continues to rage among many people confused by conflicting reports spreading online.

Alberta's medical health office offered assurances Thursday on Twitter, stating "there is no strong evidence to indicate that ibuprofen could worsen COVID-19 symptoms beyond the usual known side effects."

"Until more information is available, people may wish to take paracetamol/acetaminophen to treat COVID-19 symptoms, unless advised otherwise by their doctor," said the account, run by public health staff on behalf of chief medical officer Dr. Deena Hinshaw.

The executive vice president and chief pharmacy officer of Ontario Pharmacists Association also said Thursday there was not enough evidence to avoid the common painkiller but nevertheless suggested concerned patients use acetaminophen instead.

"It's sometimes good to err on the side of caution because we can't disapprove what that statement was," said Allan Malek, referring to a weekend tweet from France's health ministry that sparked the controversy.

"Because there is another alternative — acetaminophen, which are the Tylenol-based products — that would be a good alternative in terms of treating fever and pain that may come along with positive symptoms of COVID-19."

Controversy over ibuprofen arose last weekend when France's health minister tweeted that nonsteroidal anti-inflammatory drugs — a category of drugs known as NSAIDs including ibuprofen — could be an aggravating factor for COVID-19 patients.

Drug safety researcher Mahyar Etminan traced the confusion back to a letter in a medical journal that hypothesized ibuprofen should not be used, and anecdotal evidence in France that suggested COVID-19 patients who took ibuprofen did poorly.

"Other than these two pieces of evidence there are really no studies that have looked at whether ibuprofen has any detrimental effects in these patients," said Etminan, an associate ophthalmology professor at the University of British Columbia with appointments in medicine and pharmacology.

Nevertheless, he, too, suggested patients turn to acetaminophen as their "drug of choice."

If the fever is high and sustained, however, he said there's no reason to deviate from the standard practice of alternating acetaminophen with ibuprofen every four hours.

The World Health Organization attempted to clarify things Wednesday with a tweet stating: "Based on currently available information, WHO does not recommend against the use of ibuprofen."

And British Columbia's medical officer of health said Tuesday she had yet to see good data on the matter.

Malek, who takes ibuprofen regularly for arthritis, said those who already take ibuprofen should not stop, but should ask their pharmacist or doctor if concerned.

He notes there are a variety of conditions for which ibuprofen is not appropriate and advised people looking for over-the-counter remedies to always check the ingredient lists of multi-symptom products.

If it can be avoided, he suggested steering clear of combination medications, noting over-the-counter drugs are not completely benign.

"I'm not a big believer in pushing in a thumb tack with a sledge hammer," said Malek.

"Every combination medication is going to come with all the side effects and all the interactions that each of the medications bring. Why put yourself at risk if you don't need those extra ingredients?"

As to whether questions about ibuprofen can ever definitively be put to rest, Etminan said that would be difficult to do.

"The problem is you can't randomize patients to look at this topic. It's just not ethical, it's not going to happen," said Etminan.

"Even if there are people who do worse on ibuprofen and have COVID-19 it's very difficult to tease out what we call confounding by disease severity, which means we don't know if it's the COVID-19 that's making them worse or the ibuprofen that they took to relieve the symptoms. It's very difficult to design a study that would separate these two issues."

This report by The Canadian Press was first published on March 19, 2020.