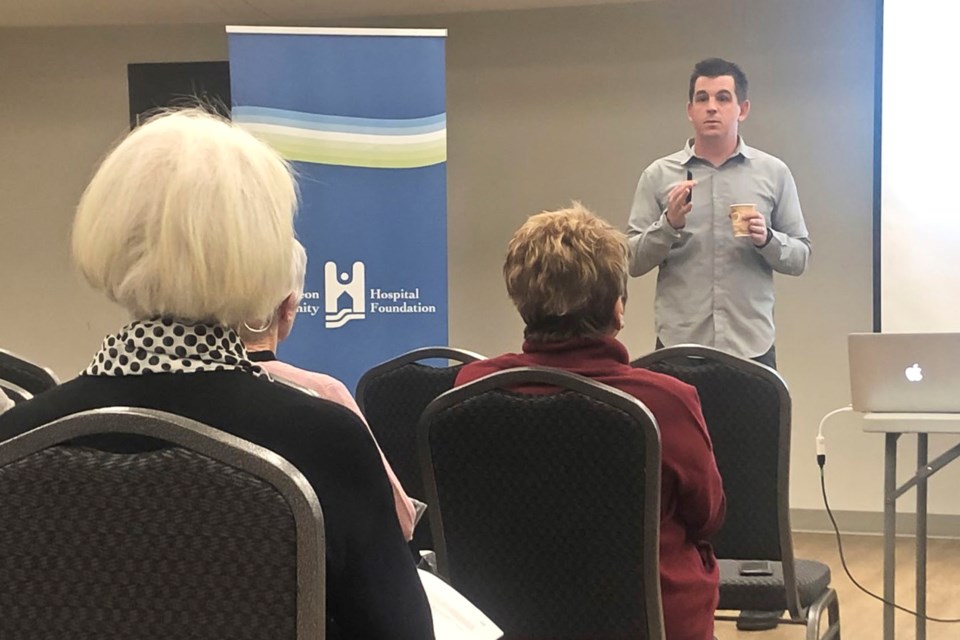 When someone is diagnosed with diabetes, they aren't usually worried about being judged or shamed by others for eating too much sugar – they’re more concerned about getting treatment.

But for those struggling with opioid use disorder, there’s still a misconception that addiction is a matter of choice. Feelings of guilt and shame can build barriers to having open conversations about opioid use, isolating those who need help.

“I’ve always said this isn’t just a family disease – it’s a community disease,” MacMillan said. “How do we get the conversation to change? What do we have to do to get people to say this is a community problem?”

The hospital foundation committee held a free opioid awareness seminar on Feb. 5 at Red Willow Place to shed light on the crisis affecting thousands of Canadians.

Approximately 25 people attended, but MacMillan said she believes more people would have come if it wasn’t for the stigma surrounding addiction.

“We have standing room only when we have our wills and estate planning (seminars). Talks about concussions (or) medical assistance in dying are jam-packed."

“(With opioid use disorder), everybody thinks it’s somebody else’s problem. And it probably exists in a lot of families, but they don’t know how to identify it. The stigma can be paralyzing for people.”

At the beginning of his talk, Dr. Scott MacLean – an emergency physician at the Sturgeon Community Hospital – showed a picture of a mother holding a picture of her 25-year-old son who died of an opioid overdose in 2014.

“He is one of almost 2,000 Canadians who died from an overdose, in addition to all the others that are suffering from addiction,” said MacLean. “That’s the reason why we’re here.”

More than 13,900 Canadians died from apparent opioid-related deaths between 2016 to 2019, according to Public Health Canada. Last year, between January and June, 2,142 deaths occurred, of which 94 per cent were accidental.

Men were disproportionately affected, making up 75 per cent of accidental deaths. Twenty-eight per cent of those who died were between the ages of 30 and 39, the highest percentage across all age groups.

According to Statistics Canada, life expectancy had also stopped increasing for the first time in over four decades because of the opioid crisis.

The problem is not just because of the emergence of fentanyl, a drug 100 times more powerful than morphine, and other illegal narcotics – it’s because of prescribed opioids as well, MacLean said.

In 2018, 3.7 million Canadians aged 15 and older used an opioid pain medication – 13 per cent of the country’s population, according to the Canadian Community Health Survey. In Alberta, 400 out of every 1,000 people are prescribed opioids, MacLean said.

“One thing we need to recognize as a profession is that what we do has an impact,” he said, adding physicians generally have free rein when it comes to patient prescriptions.

The best thing people can do about the opioid crisis is to help reduce the stigma, said Ramon Flores, a social worker with Alberta Health Services.

Supervised consumption sites alone in Alberta reported a 100-per-cent success rate when reversing opioid overdoses, amounting to more than 4,300 lives saved, according to a 2019 report from the Alberta Community Council on HIV.

Alberta Premier Jason Kenney said in late January he wants a bigger emphasis on detox, treatment and recovery instead of harm reduction, but MacLean said writing off overdose prevention sites isn't the way to go.

The problem with crossing off those sites entirely is the complexity of addiction itself, MacLean said.

“We shouldn’t say, well, we’re not going to do this, we’re going to do that, because we know there’s a failure rate,” he said. “We can try and help them, but we can’t make them stop.”

Businesses offered additional government supports
'If you operate a gym, you can be open:' Shandro
Good morning, St. Albert!
St. Albert library to reopen next week