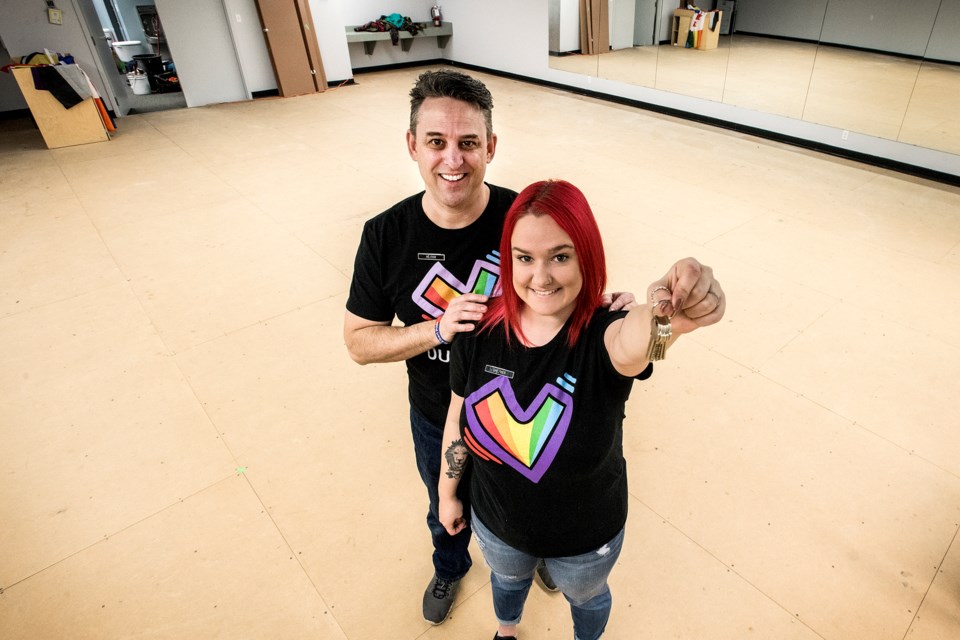 The days of Outloud borrowing meeting space and lugging around boxes and boxes of supplies and other gear are over. Terry Soetaert now has keys in his hand and a big smile on his face.

“We're very, very happy. It's not a really fancy place, but we don't really go for fancy. It works out perfect for us,” the group’s executive director said.

Since 2014, the LGBTQ youth group has been holding meetings in irregular meeting locations, pretty much any place where there was a room that could seat two-dozen people: churches, schools, the St. Albert Food Bank and Community Village, and The Collective were all well-utilized spots.

Soetaert admitted it was always a challenge but as long as they kept their eyes on the main goal – keeping the group cohesive – then everything else was just logistics. Of course, as the years went on and the group grew, sometimes close to 50 members at a single meeting, the need for a space to call their own became more and more heightened.

It’s a good problem to have, Soetaert said.

Thanks to Outloud’s close ties to various community groups, their space needs came to the attention of the St. Albert Family Resource Centre in the southwest corner of Campbell Park, which had a room recently become available.

“Things just came together and they thought, ‘what do you think of this space?’ We were overjoyed to see something like that. We're very, very happy. It's not a really fancy place, but we don't really go for fancy. It works out perfect for us.”

The group will celebrate the occasion with an open house and ribbon cutting ceremony on Tuesday, Jan. 14, starting at 6 p.m. Some of the group’s members will share stories and memories to mark the milestone. A PFLAG meeting will take place right afterward at 7:30 p.m.

To have parents and their children together like this has long been a goal. That’s what home is, after all, he said.

“That's the thing that we're feeling from some of the kids and that's how I feel for sure, that when you got your own place, you can do what you want, but you also treat it like it's your own place too. It feels more comfy.”

“This is a dream come true,” stated vice-president and Pride St. Albert director Mia Soetaert. “We have been working towards this for the past six years and I can’t believe it is here. We have been doing lots of reminiscing... started in a church basement and now we’re here ... wow is all I can say. I’m so proud of our staff, youth and crucial volunteers that helped make this happen.”

For Terry Soetaert, it means not having a vehicle constantly full of boxes and supplies being transported everywhere. It also means now the real work begins, starting with furnishing the place but soon leading to bigger aspirations including more support groups.

“It's very exciting. It's also something that I think is going to help us both to grow and to attract more people for this, for St. Albert Pride, for everything. Just to show more people that we are here because I hear that every month: ‘Oh, wow. I never knew that there was anything LGBTQ in St. Albert.' Now there's five different groups. There's lots of things going on.”