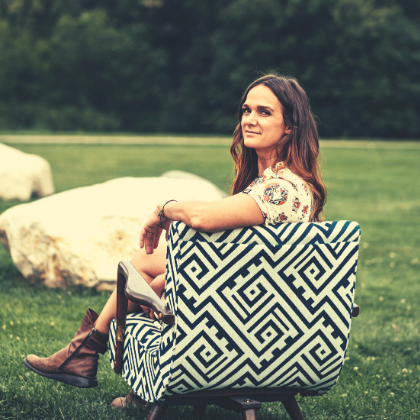 While many have put life or career on hold through the pandemic, it's not that way for Edmonton singer/songwriter Chloe Albert. Not only is Albert busy raising three young sons (ages 6, 4 and 1), she's carved out enough creative time to write, record and release a six-song album (her third) appropriately titled Come Around Again.

"I've been playing professionally for over 10 years, but it's been eight years since my last album--I really wanted to put out a piece of work this year," said Albert, noting it's been a different experience without having in-person live performances to support the new album launch. "We started recording in 2019 while I was pregnant with my third son, but I couldn't breathe well to record the vocals, so we pulled the plug and took a long break."

While Come Around again is released April 23, fans can already enjoy a first single called Die Trying. The electric, up-tempo number is one that'd easily work on country radio or CKUA but Albert said radio play is hard to come by because her influences are 'all over the map'. The resulting sound is a blend of country, folk, rock and blues Albert calls 'North Americana'.

Produced by CCMA and Juno award-winning keyboardist Mike Little and with a vocal feature by Calgary's T. Buckley, Die Trying asks "What if there was a minute, only seconds left? Would you catch this train, or see what's coming next? Albert's fresh, feel-good songwriting and rhythmic groove make the song a perfect one to lead off the project.

"The album is quite varied. Love is always a theme--toiling over it or dealing with the struggle of heartache. But another, 'Ode to Regine' is an instrumental piece (featuring cellist Christine Hanson) I wrote for my Quebecois grandmother--the French part of my heritage," said Albert. "I wanted to add words, but I sat at the piano and this is what I got. Sometimes I'll grab a guitar in a moment of inspiration, but piano is my first instrument and I tend to do my writing there."

Hailed for her 'collaborative spirit', Albert wrote most of the songs on this album herself while spending extended periods of time at home with her husband and young sons.

"A line or two will usually fall out of the sky, and eventually the meaning of a song is revealed," she added. "I try to embrace collaboration, to see what can be created. This album features fully-produced pieces; people get plenty of the solo me at my guitar concerts."

For the multiple Edmonton Music Award-winner, motherhood has offered new perspectives and a maturity in life and her music.

"I'm more confident as an artist. Motherhood makes me feel grounded; rooted in who I am, though I have a much more fragile heart now," Albert said.

Albert has been a staple of the Edmonton music scene since her first album Dedicated State debuted in 2008. That Canadian Folk Music award-winning album led to her sophomore offering in 2013, Dreamcatcher, which was Juno-nominated for Adult Contemporary Album of the Year. Albert acknowledges sharing this new album with audiences will have to happen differently this time around.

"I haven't embraced live-streaming my music, but there are outdoor events to look forward to: front or backyard concerts, neighbourhood gatherings and Peace Fest (in Peace River, AB) this June. I'm looking forward to playing live with and for others again."