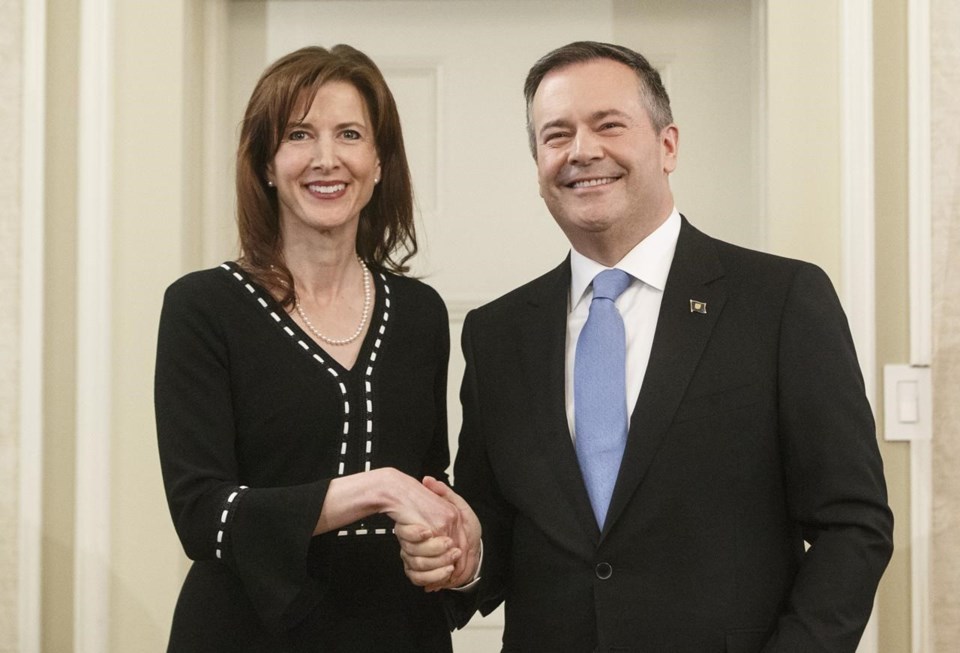 Alberta premier Jason Kenney shakes hands with Tanya Fir Minister of Economic Development, Trade and Tourism is sworn into office, in Edmonton on Tuesday April 30, 2019. Alberta has proposed legislation to stop business tenants from being evicted during the economic slump caused by the COVID-19 pandemic. THE CANADIAN PRESS/Jason Franson

EDMONTON — Alberta Premier Jason Kenney says he will call a referendum on pushing Ottawa for a better deal on equalization payments as well as explore the province cutting ties with the RCMP and leaving the Canada Pension Plan.

Kenney made the comments as he released recommendations from his Fair Deal panel, which he created last year to gauge the mood of Albertans and determine better ways the province could assert itself in Confederation.

"Albertans are happy to have had the opportunity to contribute mightily to the rest of the federation," Kenney said Wednesday.

"But what Albertans cannot and will not accept is governments across the country benefiting from that wealth and our resources while seeking to block and impair our development of that wealth."

He said a referendum will be held next year to gain a mandate to force federal officials to discuss reform.

The panel said Alberta has contributed a net $240 billion to the federation since 2007.

A referendum would not change the equalization formula, something that requires action by the federal government and other provinces, but the panel said it would compel federal officials to at least negotiate.

The panel held consultations in late 2019 and early 2020, wrapping up just as the COVID-19 pandemic hit with full force, shutting down jobs and leading to illnesses and deaths. The health crisis forced the provinces and the federal government to work in lockstep to reduce the infection rate while keeping the economy from catastrophically cratering.

The panel held 25 town hall meetings, met with others, and conducted a survey completed by 40,000 people to go with a phone poll of 1,000 more.

Based on the findings, the panel urged Kenney to also create an Alberta Pension Plan, similar to Quebec's model, saying that Alberta's young population would mean lower contribution costs and returns on par or better than the federal plan.

Kenney said his government will study that idea, along with a recommendation to create an Alberta police force.

The panel suggested the RCMP is becoming too bureaucratically inflexible and smaller communities aren't getting enough front-line officers.

The report does not provide evidence to demonstrate that a majority of Albertans want a separate pension plan or want to abandon the RCMP. In fact, it states that in the telephone poll of 1,000 Albertans, two-thirds don't want a provincial police force and almost six in 10 want to stay with the Canada Pension Plan.

Asked to point to evidence in the report showing majority support for these two recommendations, panel chair Oryssia Lennie said, "We heard this (Alberta police initiative) largely from rural Albertans."

Lennie added that overall "we not only looked at the responses to the surveys, but we also listened to people at town halls and we heard and read their electronic and written submissions and we spoke to experts.

"Our conclusions and our recommendations ultimately reflect that."

Kenney added his government has also done independent polling "which has found pretty significant support for the possibility of an Alberta provincial pension plan."

"Albertans were clear: the last thing they wanted was this premier interfering with their retirement," Notley told the house during question period.

"One man said he didn't trust this premier with his bingo winnings let alone his pension."

Also Wednesday, Kenney followed through on plans and said Alberta will hire its own chief firearms officer.

Justice Minister Doug Schweitzer said this will ensure federal gun laws are carried out with a sensitivity to Albertans' concerns.

This report by The Canadian Press was first published June 17, 2020