Parched river, fish stocks no longer in peril thanks to local beavers

They’re on a mission,” said biologist and wildlife control trapper Robert MacDonald. “Their job is to keep that water backed up and they don’t care what we think of that.”
Jul 22, 2021 2:00 PM By: Andrew Smith 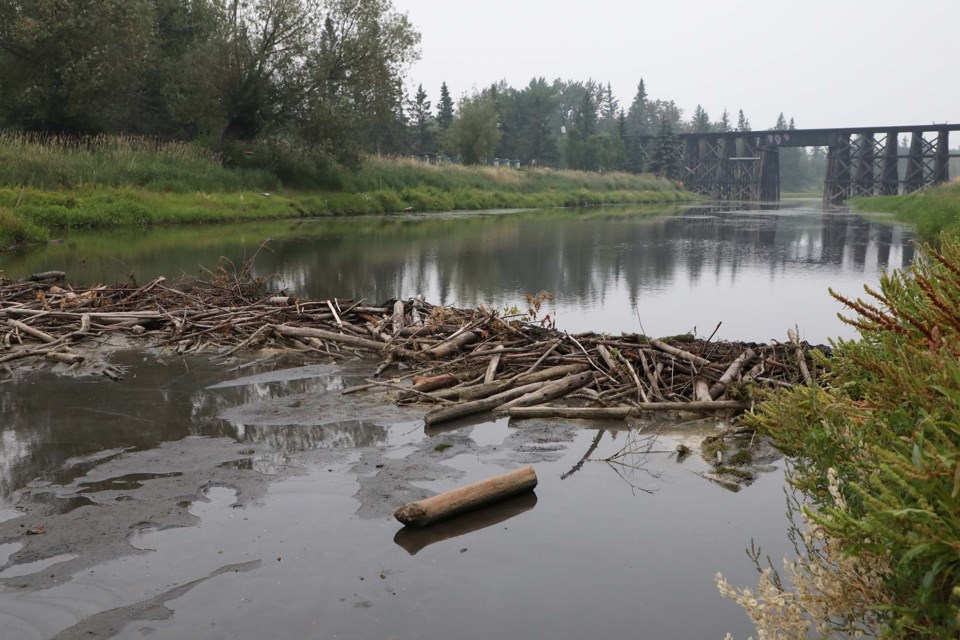 Those dam beavers: Low water levels in the Sturgeon River are being exacerbated by a beaver dam built by the Children's Bridge, but it isn't all bad.JESSICA NELSON/St. Albert Gazette

Big Lake's and the Sturgeon River’s fish stocks are in peril. Nature's solution: Dam it.

Between the heat wave, a lack of rainwater, and a new beaver dam located just under the Children's Bridge, the Sturgeon River is a little plugged up.

Thanks to a few local beavers, it's going to stay that way until water levels return to normal, according to the city.

“The dam is keeping the water levels up back to Big Lake, with fish taking refuge in the dammed water. If the dam is removed, the water will spread out into the larger flood plain and evaporate, and will likely result in a very large, very visible fish kill in downtown,” Coun. Natalie Joly wrote in a Facebook post quoting city administration last week.

While the dam would usually be seen as a nuisance and deconstructed, and the beavers safely relocated, it's actually a great help at the moment.

“We will leave the beaver dam until we get enough water for the river to come up to more normal levels,” said Melissa Logan, environmental co-ordinator at the City of St. Albert. “Dams can be left alone if there is no risk of damage to infrastructure. There is no need for them to be removed unless there is a flood risk.”

The St. Albert Natural Areas Conservation and Management plan states that all beaver dams are only removed after considering any impact they may have downstream.

“Beavers are the original waterway engineers,” said retired senior wildlife regional biologist and St. Albert resident Hugh Wollis in an interview with The Gazette. “They need a certain water level to build lodges and collect their food, and they change the landscape around them to accommodate that.”

Wollis said with enough rainfall, the dam will likely give way.

Biologist and wildlife control trapper Robert MacDonald said if the city doesn't get enough rainfall to break the dam, the beavers will likely have to be relocated once the dam has served its purpose.

Beavers can plug our drainage or cause flooding over roadways, said MacDonald, adding the dams can cause erosion on riverbanks and risk damaging bridges nearby.

“They’re on a mission,” said MacDonald. “Their job is to keep that water backed up and they don’t care what we think of that.”

For their impact on city infrastructure, they are considered a nuisance.

MacDonald said beavers are so tenacious, the only way to get them to stop building dams and clogging an area is to remove them from the area entirely.

“They can be challenging to capture. One time I had to resort to peanut butter to get the little guy out of there,” he said. “He’d seen a lot of things, but he’d never seen peanut butter.”

Until the time comes, the city plans to back off and let the beavers do their work.