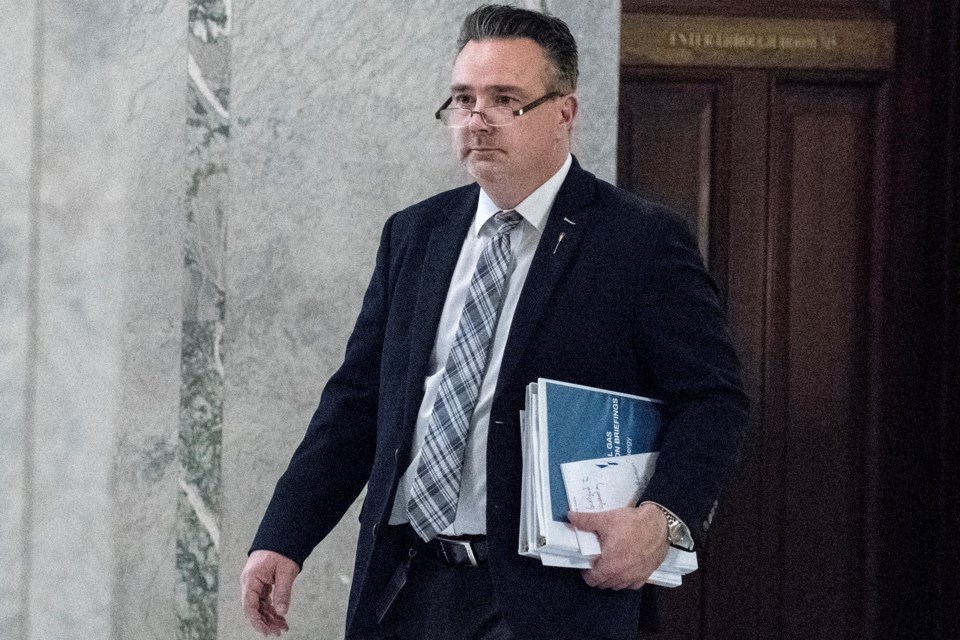 Dale Nally, Associate Minister of Natural Gas and Morinville-St. Albert MLA, walks through the halls of the legislature on his way to the Committee room prior to the first UCP budget at the Alberta Legislature in Edmonton Oct. 24, 2019. DAN RIEDLHUBER/St. Albert Gazette

A program promoting petrochemical diversification is being extended by the provincial government.

Last week, the UCP government announced they would continue the Petrochemical Diversification Program, which the government says encourages investment, diversifies the economy and creates jobs.

Dale Nally, Morinville-St. Albert UCP MLA, said the program continuing is great news for his riding. Nally said the program began under Jim Prentice's Progressive Conservative government in 2014 and was not finished until after the 2015 election.

“But the NDP, to their credit, recognized a good thing and continued on with it,” Nally, who is also the associate minister of natural gas, said. “We are going to maintain that and we're making a $1.1-billion investment in petrochemical diversification."

The program supports privately funded large-scale projects by providing royalty credits to companies that build facilities that turn ethane, methane and propane feedstocks into products like plastics, fabrics and fertilizers.

“'It’s no secret that Moriville-St. Albert and the industrial heartland have got a huge petrochemical industry, as do other areas as well,” Nally said.

The associate minister said continuing the program is going to create jobs across the province.

“The bottom line is petrochemical diversification in this province is going to benefit ... the constituents of Morinville-St. Albert and it's going to mean jobs,” Nally said.

Ken Kobly, president and CEO of Alberta Chambers of Commerce, said the program was good news for the region.

“The one thing that's probably important to the Edmonton region is (the UCP) continued on with the modified petrochemical diversification program. I think that is a good program,” Kobly said.

In the announcement, Energy Minister Sonya Savage said her government will be committing $1.1 billion for the second phase of the program. So far, only two projects have been awarded a combined $150 million in royalty credits under the program, leaving some $950 million still up for grabs.

The government is ending two other programs, the Petrochemical Feedstock Infrastructure Program and the Partial Upgrading Program. Savage said both programs have a higher financial risk to the province.

“These programs relied on grants and loan guarantees that carry a higher financial risk to our province and ultimately to Albertans,” Savage said.

“We want to ensure that the innovation and development that industry can bring to the province is fiscally prudent and benefits both Albertans and investors in our province.”

But not everybody is happy with the continuation of the program.

Terrazzano lauded the government for cancelling the two other programs, but said they should have ended the Petrochemical Diversification Program as well.

“There is still one big corporate welfare program and that's the petrochemicals diversification program. That’s a low-hanging fruit that the government should have scrapped right away,” Terrazzano said.