County moves to join farm plastic recycling pilot project and seeks to loosen up rules regarding highway development
Jul 2, 2019 10:30 AM By: Kevin Ma 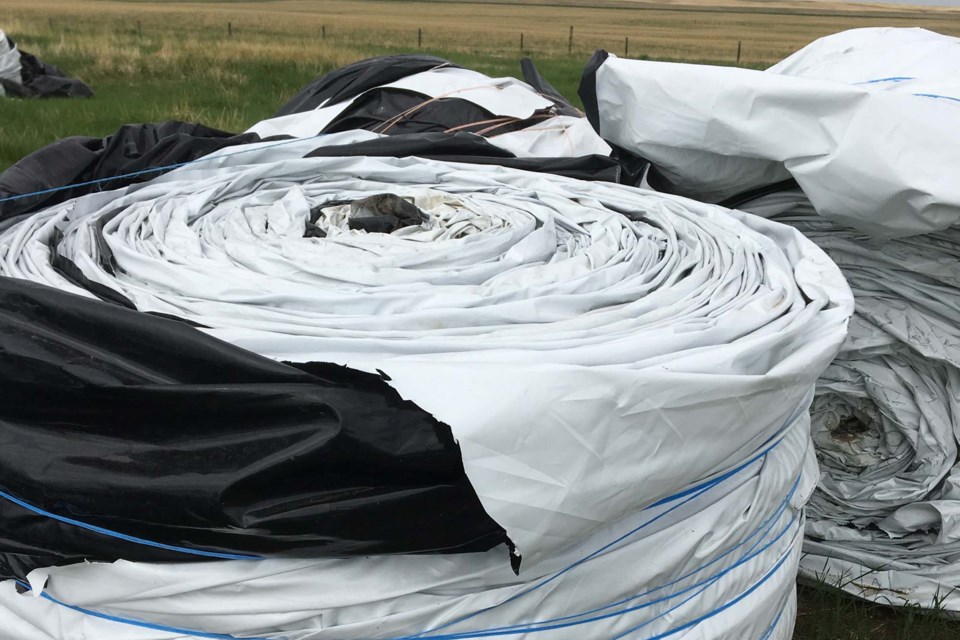 FARM PLASTICS – Sturgeon County has moved to join a province-wide pilot project to recycle agricultural plastic waste, such as the large grain bags shown here. Alberta Agriculture studies have found that Alberta farms produce over 10,000 tonnes of plastic waste each year, the vast majority of which is burned or landfilled. TAMMY SCHWASS/Photo

Sturgeon County council voted 6-0 (Coun. Susan Evans absent) on June 25 in favour of a motion from Coun. Karen Shaw to come up with a project that could be funded under the Alberta Agricultural Plastics Recycling Pilot Program.

Launched by the provincial government in January, and co-ordinated by the Alberta Beef Producers and the Agricultural Plastics Recycling Group, this $1 million three-year project aims to figure out how to get more farmers to recycle plastic waste. It will specifically focus on grain bags and twine.

A 2013 study commissioned by Alberta Agriculture found that Alberta’s farms cranked out about 10,300 tonnes of plastic waste a year, most of which was wrap, twine, or those gigantic grain bags you see lying in fields.

A survey done the previous year by the province found that just 17 per cent of farmers recycled any of that plastic waste, with most of them burning, landfilling, or storing it instead.

There simply aren’t a lot of options in Alberta if you want manage farm plastic waste, said Tammy Schwass of the Alberta Plastics Recycling Association. Most landfills reject it, and you release toxic fumes when you burn it. (It's also illegal to burn plastic in Sturgeon County.) Six communities have local recycling programs, but there’s nothing provincewide. The one exception is pesticide containers, which are recyclable through a national program.

Shaw said she personally has a pile of plastic waste on her farm from last winter, and in one year filled a 20-foot trailer with silage plastic after just four months.

“There really isn’t a place for it, and it’s a growing issue.”

Shaw said farmers want to do the right thing, which is why she wanted the county to get in on this pilot program for farm plastics.

The pilot will see Cleanfarms (which runs the national farm pesticide container program) set up 20 collection sites this fall to recycle grain bags and twine, Schwass said. Any community that wants to host such a site can apply online at cleanfarms.ca/alberta-ag-plastic-recycle-it-program.

Council is to get a report on this issue by Oct. 22.

County council voted 6-0 (Evans absent) on June 25 in favour of a motion from Coun. Wayne Bokenfohr to have administration ask Alberta Transportation to remove roadway setbacks of 800 metres as they restricted business.

Alberta Transportation requires developers to get a permit for anything built within 800 metres of an intersection between a highway and a secondary road, Bokenfohr said. Those permits usually require turning lanes, which are requirements most non-profits and small businesses can’t afford.

“It stymies small business,” he said, as the alternative is to set up shop 800 metres away, which means you don’t get customers. The old pork plant on Hwy. 37 has been vacant for years in part due to turning lane requirements.

Bokenfohr said a recent cross-Canada drive convinced him that Alberta was an anomaly when it came to this approach to highway development. Instead of requiring a turning lane up front, he believed Alberta Transportation should let a small business get established first and then require a lane if the business takes off and draws a lot of traffic. This would encourage more business development and create the tax dollars needed to build those lanes.

Bokenfohr said he hoped to put this idea before the Rural Municipalities of Alberta as a motion so they could lobby the province on it.

Morinville-St. Albert MLA Dale Nally said he hadn’t heard of this issue before in Sturgeon, but it looked like one that Associate Minister of Red Tape Reduction Grant Hunter should examine.

“On the surface, it looks like a roadblock to small business,” he said.