Whether or not St. Albert should paint a rainbow crosswalk turned out to be a contentious issue for residents this week.
May 11, 2018 2:59 PM By: April Hudson 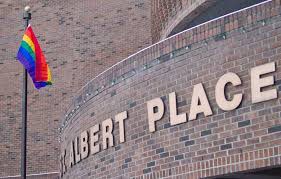 The City of St. Albert has flown a Pride flag outside of St. Albert Place. Mayor Cathy Heron floated the idea of a Pride crosswalk as another way to support the LGBTQ community.

Whether or not St. Albert should paint a rainbow crosswalk turned out to be a contentious issue for residents this week.

The topic of a city-funded rainbow crosswalk – a symbol of support for LGBTQ community members – exploded on Mayor Cathy Heron's Facebook page on Wednesday after she posted a poll asking for residents to give their opinions on the subject.

By Friday morning, 7,500 people had voted and 43,000 had seen her post. Hundreds shared the poll to their own Facebook pages or left comments on Heron's post.

"I don't know if this is going to lead to a crosswalk, but it was a great discussion," Heron said, adding some people who were not in favour of the crosswalk offered alternative suggestions such as a mural or fundraiser.

"For the most part, there was a thoughtful process in what could we do that's different or better than a rainbow crosswalk, because we do want to make this marginalized community feel included," she said.

Like any social media discussion, however, the poll was open to all comments, including ones that crossed the line into homophobia.

Heron said she originally thought she could stay on top of any negative comments but the sheer amount of responses overwhelmed her.

"I did notice a few comments that were homophobic in nature, but the public quickly said, 'That's enough – we don't want to hear that," she said.

Mia Soetaert, a founding member of LGBTQ youth support group Outloud, said she was disappointed to see some of those comments. She said the impact a rainbow crosswalk can have on youth in particular should not be underestimated.

"I think it's nice to actually see the city want to put money toward a minority group like that."

Heron said roughly 67 per cent of voters were in favour of the crosswalk, although people who weighed in in the comments section were more likely to oppose it.

While many commenters called the idea a waste of money or worried it could distract drivers, others questioned what purpose a rainbow crosswalk would serve, and a small minority of commenters took aim at the notion of a project for the LGBTQ community instead of for other groups.

Kris Wells, an assistant professor at the University of Alberta and faculty director for the Institute for Sexual Minority Studies and Services who lives in St. Albert, says some of the homophobic comments are a hazard of social media, adding city leaders need to be careful when approaching these topics.

"I worry about how some comments could impact the safety and well-being of LGBTQ youth in our communities, but at the same time I guess I'm heartened by the fact that the vast majority of people support the idea. I think that's positive," he said.

"I really hope council will do the right thing and support these crosswalks vocally and vigorously, because I think conversely these kinds of attitudes that are being expressed really demonstrate the need."

Heron's response to the negative comments is to push forward. She said she still plans to bring the subject up with council and may reach out to some of the Gay Straight Alliances in schools for their thoughts.

"Those negative comments highlight why we need to do a visual display of our support," she said.

"A crosswalk is a small thing you can do to just make your community a happier place."

The ghost of crosswalks past

Fresh in the memory of some commenters was the spectre of a crosswalk mural commissioned by the city in 2015 for the roadway in front of St. Albert Place.

At the time, many residents slammed it as an eyesore as well as a waste of money. Public support dwindled further as the brightly coloured mural faded – but Heron says that mural, unlike a rainbow crosswalk, was never meant to last.

"If you do a rainbow crosswalk, you embed it into the pavement and it is meant to last. That's a big difference," she said.

The city currently embeds its white crosswalks into the roadway, a method that gives them a longer life, although they still require upkeep.

But what would such a crosswalk cost?

In 2017, city council received a report from staff that outlined several different options for a rainbow crosswalk, with rough price tags ranging all the way from $800 up to $8,500.

For the most permanent option – which would need maintenance every two years – the cost ranged from $4,100 to $8,500.

However, Heron said the crosswalk she envisions would not be a brand new fixture but would instead be painted over an existing crosswalk, which could bring down costs significantly.

"We would be putting in a crosswalk anyway, so it would be just a small incremental cost to do it in colours," she said.