On Saturday a group in support of a branch library met to kick off their campaign, Vote Yes for the Library.
Sep 20, 2017 12:03 AM By: Dayla Lahring 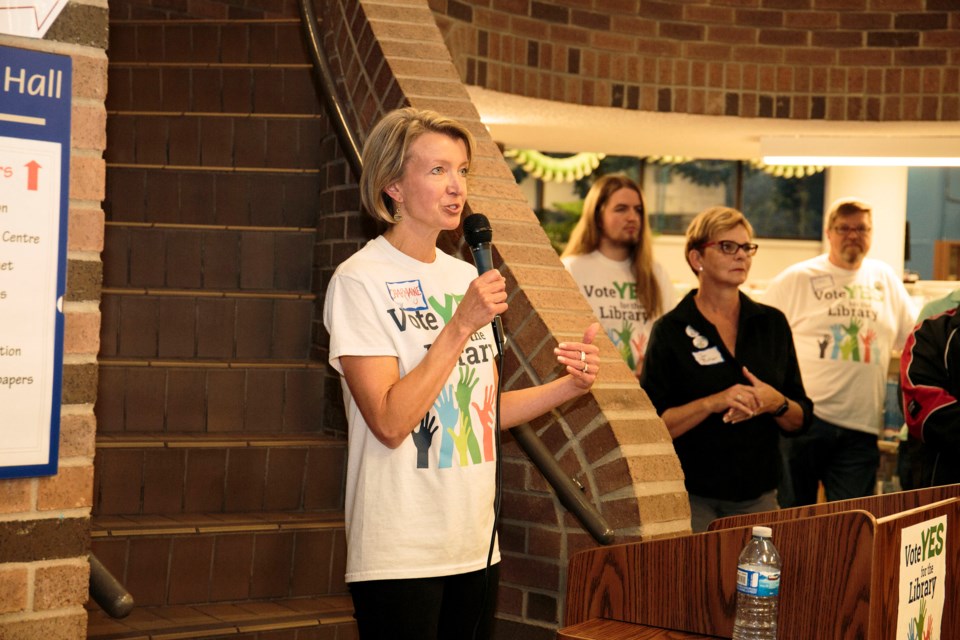 Charmaine Brooks, chair of the Vote Yes for the Library, speaks from the podium during the campaigns kick off on Saturday. She asks a group of around 220 people, what would Lois do?’, referring to Lois Hole, former Lt.-Gov. of Alberta.

On Saturday a group in support of a branch library met to kick off their campaign, Vote Yes for the Library. Charmaine Brooks, the Chair of the vote YES for the Library Campaign Committee, says the party was meant as a way to raise awareness, generate enthusiasm and share the facts supporting the need for the branch library. “We really want this to be a positive campaign and a way for people to remember really what this community stands for,” she said in a follow-up interview. With a microphone in hand, Brooks asked the crowd of around 220 people wearing supportive T-shirts, ‘what would Lois do?’ “It’s painfully ironic and somewhat embarrassing that this issue is on the ballot in Lois Hole’s hometown,” she said during the kick off party. The question has become the group’s slogan, centred on Lois Hole, former Lt.-Gov of Alberta. Brooks says Hole was an advocate for libraries. “I’ve been reading her speeches every night before I go to bed, and she hardly ever speaks without mentioning public libraries. It doesn’t even matter where she goes,” Brooks says. Since starting the campaign, Brooks says the Hole family has been standing with the group in full support. She first came up with the slogan ‘what would Lois do?’ after she was talking with her father about the opposition towards building a new branch library. Brooks said her father asked her offhandedly, ‘This is really odd that this happening in Lois Hole’s town, I wonder what she would have to say about all of this?” Since the conversation, that question has been at the forefront of the campaign. A page devoted to Hole is on their website, where the former Lt.-Gov. is quoted from different speeches she’s given about libraries. During the kickoff party mayoral candidate Cathy Heron donated $1,000 to the friends of the library group. A total of $2,126.25 was raised at the event. The campaign originally had a fundraising goal of $5,000, but has since increased it to $10,000. All funds raised will go towards advertising, creating T-shirts and community events. The advocacy group, which is focused on supporting the construction of the new branch library in St. Albert, is made up of about 40 volunteers. The main steering committee is made up of around seven members. The pro-library group is one of two community groups focused on the controversial library branch expansion, the other being the the Library Plebiscite Committee. The branch library is one of three capital projects on an upcoming plebiscite. For more information on the Vote Yes for the Library visit: http://www.yesforthelibrary.ca/