A group supporting the construction of the new branch library in St. Albert made its first appearance at Tuesday's city council meeting.
Sep 9, 2017 12:02 AM By: Jennifer Henderson, Local Journalism Initiative reporter 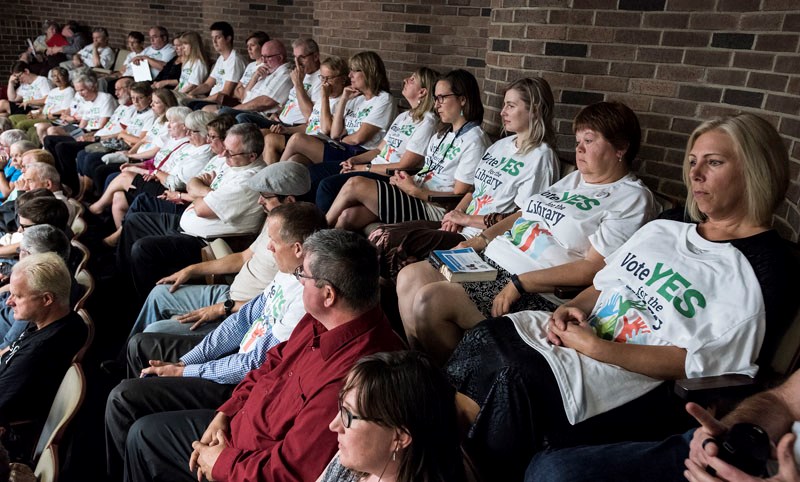 A large crowd filled the seats of the gallery in council chambers during a city council meeting in St. Albert September 5, 2017. Many of the attendees wore 'Vote YES for the Library' t-shirts.

A group supporting the construction of the new branch library in St. Albert made its first appearance at Tuesday's city council meeting. The group called Vote Yes for the Library has formed to advocate for a new branch library during the upcoming plebiscite. At the council meeting, the group, along with the group who organized a petition against borrowing money to build a new branch library, packed the gallery to watch the council debate over the election plebiscite question wording. Charmaine Brooks, the Chair of the YES for the Library Campaign Committee, said the group wants to create a community-building centre for the city. The group formed in August as a result of the push-back against the library, she said. Brooks is a former chair of the St. Albert Public Library board. “It has been a rocky four years for St. Albert. There is a real need to come together and celebrate what is good about public libraries and how desperately we need them in this time of polarizing politics and community-eroding ideas,” Brooks said. The pro-library group is made up of about 40 volunteers who are on the library board, part of the friends of the library group or members who are just avid library users and supporters, she said. The main steering committee is made up of about seven members including a library staff liaison, a board liaison and St. Albert citizens. The rest of the volunteers are involved in sub-committees. Brooks said that although there are three capital projects on the plebiscite question, the library group is not fighting against building the other facilities. “Of course there are needs for many different facilities and we are not interested in disparaging one against the other. We are talking about building. Period. And we see the library as an anchor and a starting point,” Brooks said. Brooks said that the group is selling the benefits of the library to the public and the “social and economic costs of not meeting those needs." “Our library draws from every demographic equally. The library is doing one of those really unique things in that it is becoming a community hub for people across different life stages and different socioeconomic stages. There are not a lot of places in the public sphere that do that anymore,” Brooks said. To raise money for the campaign, the group is selling T-shirts by donation and is  collecting donations on its new website. Brooks said the Hole family has endorsed the group’s message and has allowed them to use a photo of Lois Hole and quotes from the former Lieutenant Governor of Alberta in support of libraries. Vote Yes for the Library will focus a lot of their efforts online, on social media, engage in town halls and literature drops, Brooks said.  The group will host a campaign kickoff at the library on Saturday Sept. 16 at 7 p.m. The Vote Yes for the Library group joins an already established library petition group who have been advocating against borrowing up to $21.9 million to finance a new branch library. The library petition group presented a petition to council in June with 6,696 signatures but the petition was declared invalid with at least 558 of them not having valid affidavits. This dropped the number of valid signatures below the required threshold of 10 per cent of the city’s population.