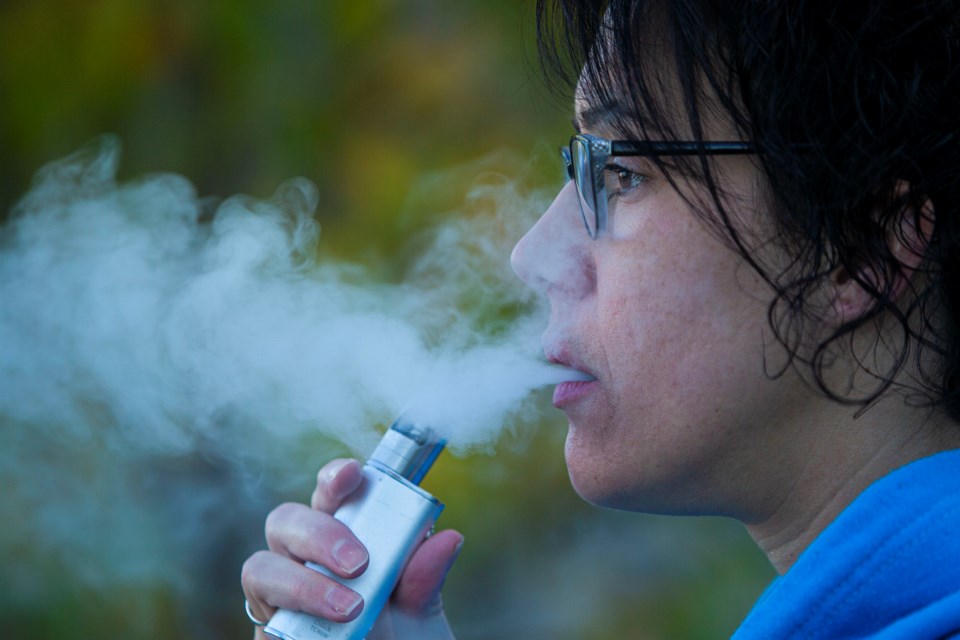 The province will be starting a review of Alberta's tobacco and smoking legislation Nov. 1. The review will focus on regulations for vaping and youth vaping, which currently are not covered by the law. CHRIS COLBOURNE/St. Albert Gazette

A St. Albert councillor says she wants the province to crack down on youth advertising as it reviews Alberta’s tobacco laws to regulate vaping.

Alberta Health Minister Tyler Shandro announced Wednesday that the province will conduct a review of the Alberta Tobacco and Smoking Reduction Act this fall with aim to regulate vaping. The province is required to start such a review by Nov. 1, 2019.

“We’ve all heard the reports of severe lung illness related to vaping in the U.S. and more recently in some cases in Canada,” Shandro said, adding that the province’s chief medical officer of health has ordered doctors to report all such vaping-related illnesses to the province as of last month.

“We want to make people know the risks of vaping and we want to regulate it based on the evidence.”

Alberta’s tobacco laws do not address vaping, Shandro said. Vaping wasn’t widespread when this law was last reviewed in 2012, but now almost a quarter of Alberta high-school students say they’ve tried it in the last month.

“I don’t want my kids or anyone else’s kids being pressured to start smoking or to start vaping.”

Shandro said the review would be led by Calgary-Klein MLA Jeremy Nixon, and would consider health and business impacts, e-cigarettes, water pipes, and hookahs. The review will wrap up by the end of the year, with possible amendments going before the legislature this spring. The province would accelerate this process if medical officials found evidence of an urgent need for action.

Shandro said details on public participation in the review will roll out later this month.

Public concern about vaping has flared up in recent months following hundreds of cases of vaping-related breathing illnesses in the U.S., some of which have resulted in death.

Health advocates are also concerned about the rise in youth vaping. A University of Waterloo study published in June found that the proportion of Canadians aged 16 to 19 who vaped jumped 74 per cent between 2017 and 2018 (to 14.6 per cent from 8.4).

St. Albert Coun. Jacquie Hansen said she was glad that the province has started this review, noting that the Alberta Urban Municipalities Association recently supported St. Albert’s call to have the province ban the advertisement of vaping to youths.

“We know that kids who are vaping nicotine are more likely to get addicted at a younger age,” she said, and that youths can easily get a hold of vaping products.

Les Hagen, executive director of Action on Smoking and Health, also wanted a ban on vaping ads that targeted youths. Current federal laws are ineffective at stopping such ads, which is why you can see them at a kid’s eye-level next to the candy bars and Slurpee machines in convenience stores.

Hagen said vaping should be subject to the same advertising rules as tobacco – limits on displays and flavours, no ads that can reach kids, and all products kept in a locked cabinet – adding that some 86 per cent of Canadians supported such a move in a May 2019 Leger Marketing poll.

“We’ve got over 35,000 kids who are using vaping products in Alberta currently, and that’s 35,000 too many. The absence of legislation has contributed to that problem.”

Thomas Kirsop, who owns the Alternatives and Options vape shops in St. Albert and Morinville, said he looked forward to taking part in this review. He supported tougher rules for advertising vaping to youth, and wanted more inspectors on the ground to enforce tobacco legislation. At the same time, he didn’t want new rules to keep vaporizers out of the hands of smokers who use it as a stop-smoking tool.

“We can address the issues we have with youth uptake without removing this option from 780,000 Alberta (adult) smokers.”