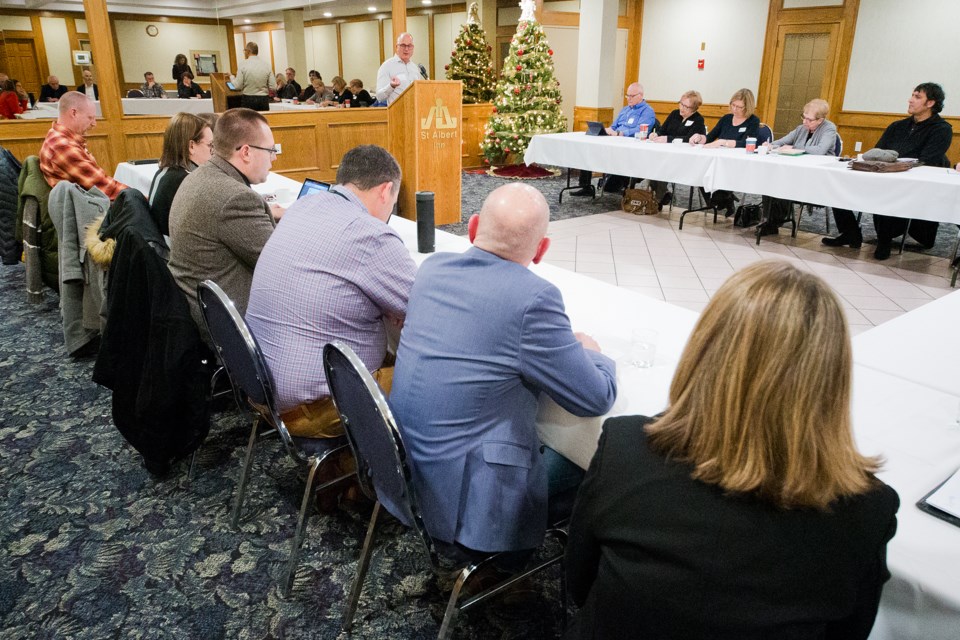 Residents will get their say Monday on whether St. Albert should get into the potentially lucrative business of offering alternative utility services through an arms-length corporation.

Councillors are set to hold a public hearing at 5 p.m. Monday to hear from the public, which will help inform their direction on whether to say yes to an Epcor-like municipal utility corporation (MUC) or not.

Current utility services offered by the city would continue uninterrupted with no rate increases to current customers, Mayor Cathy Heron has stressed, and St. Albert would look to explore entirely new lines of service.

According to a business case drafted by third-party consultant Grant Thornton, 20 per cent of the money the utility corporation makes would be handed back to St. Albert in yearly dividends. Projections suggest the corporation would pay a dividend of $1.8 million in its first year but would not be able to maintain that level of payback. Over 10 years, the projected average annual dividend is $1.38 million.

Resident Andy Keller told the Gazette if he was asked to invest in the utility corporation based on its income statement, he would not be interested. He added all business ventures come with inherent risk, but this case does not show a clear financial benefit.

For example, he noted “external grants” make up the most significant chunk of new revenue from new services. While those grants are not defined or identified within the case, 46 per cent of the new revenue is grant-related.

He added there is nothing stopping St. Albert from taking advantage of new opportunities through its existing utility model, without forming an MUC.

“I don’t think the city should be engaging in any high-risk new ventures that might impact the taxpayers and the utility customers,” Keller said.

St. Albert’s corporation would have the option to stifle competition for services it offers, thanks to a public utilities bylaw council passed in August. Any private businesses or other public bodies offering similar services to St. Albert would be prevented from doing so unless expressly given permission.

The MUC's business case notes harnessing that power to monopolize services could be “counterproductive” and jeopardize relationships.

Resident Mike Killick plans to present at Monday’s public hearing and said creation of an MUC could have “major impacts” on residents.

He used the example of the city delving into offering garbage services to commercial and apartment buildings, which could potentially result in those new customers seeing their bills increase.

“Those people could all of a sudden see massive increases in what they're charged, and they won’t be able to go out and get a private contractor to do that, because the city has declared a monopoly,” Killick said. He added a government should not be in the business of potentially putting competitors out of business.

Financial projections in the MUC business case pose “serious concerns” for Coun. Sheena Hughes, who said the figures do not make sense.

For example, the case estimates capital costs for a waste-to-energy plant would be $1.2 million and estimates salaries for that part of it would cost $30,000 per year.

However, capital for a pilot waste-to-energy project alone – which council approved Nov. 18 – would cost $4 million, with St. Albert on the hook for a maximum of $1 million.

“When I see the capital and operating costs do not reflect reality, it leads me to question exactly how profitable could this business actually be, and how much of a loss are we actually looking at if we go down this road,” Hughes said.

Grant Thornton specifically said in the case it relied upon information from city officials to draw financial projections and made no attempt to verify information.

Killick said the numbers do not instill confidence.

Killick added the numbers do not show the corporation could make a profit and keep up its end of the deal to pay dividends to the city without raising rates, since the projected dividend does not grow over time.

Killick says he hopes people voicing their questions and concerns at the public hearing will prompt council to take a “deeper look” and decide an MUC would not be a viable option for St. Albert.