"Whether that person was 100 pounds or 250 pounds, they needed to be carried down the stairs ... The amount of adrenaline in this building was unbelievable."
May 20, 2021 11:00 AM By: Brittany Gervais 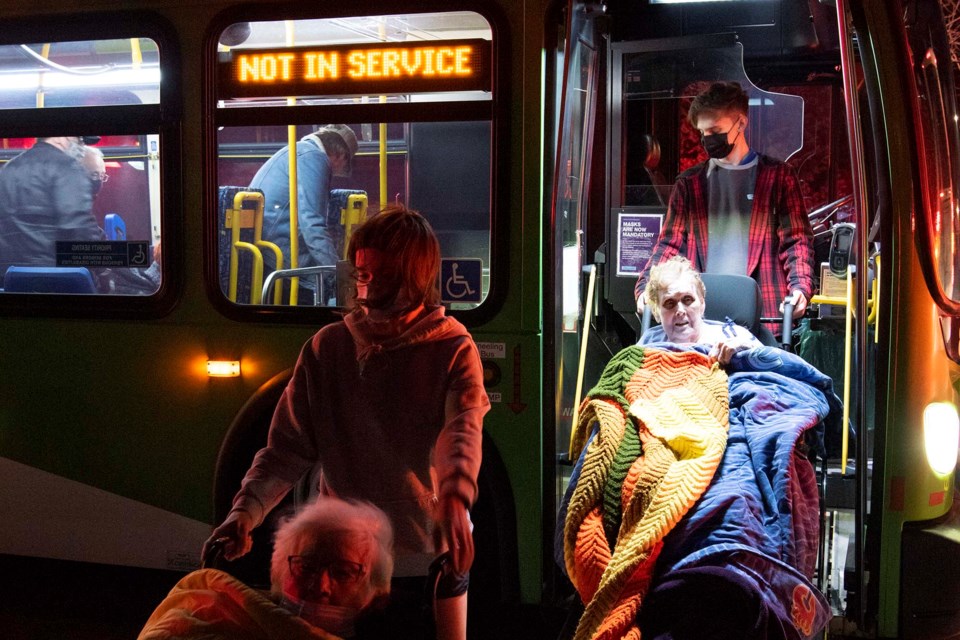 Volunteers from the Erin Ridge neighbourhood stepped up to help about 50 seniors get onto evacuation buses after a building in the complex was ravaged by fire. KEVIN MA/St. Albert Gazette

As people scrambled to help evacuate Citadel Mews West residents from the burning building May 6, Dana Schnepf remembers when the window inside the adjacent Citadel Care Centre started to glow red.

"The room that we were housing the Citadel Mews residents in has big windows facing Citadel Mews. And as soon as that room started to glow red, we knew we had another problem on our hands. We had to evacuate our building," said Schnepf, Citadel Care Centre director of care and site manager.

"When you looked out the window, it was right in front of your face – this catastrophic, giant, out-of-control fire."

By that point, the electricity in the building was cut off. This meant staff couldn't use the elevators to help 129 residents out of the complex, many of whom can't move on their own. Firefighters, focused on controlling the flames and evacuating Citadel Mews, couldn't aid with Citadel Care Centre evacuation efforts. Instead, Citadel staff, RCMP, Alberta Health Services (AHS), and St. Albertans stepped in to help.

Schnepf recounted her experience evacuating an entire complex full of residents, many of whom needed to be physically carried out, while a massive fire engulfed the west wing of the Citadel complex on May 6. She said rescue efforts represented true collaboration in the community to overcome incredible challenges to make sure no one was lost in the fire.

Long-term care centres are usually built to look nice and pretty to help residents feel at home, but how buildings are laid out and designed for safe and effective evacuation isn't always considered, Schnepf said.

When the electricity is out and the elevators no longer work, the building's layout made it challenging to get someone in a wheelchair out quickly, she explained.

For example, right outside of the emergency exit door is a set of steps leading to the exit, where people had to carry seniors in wheelchairs down. Then they had to drag wheelchairs across an area of jagged rocks, then down a steep grassy hill.

The facility's mechanical lift, which is used to transfer residents from beds to wheelchairs, could only be used until the batteries ran out. Once that happened, there was no way to plug the lift back in.

"We had to start moving residents without equipment, which really meant using more people and more muscles, and using sheets to try and hammock residents to move them from their beds into their wheelchairs."

All 129 residents were out of the building within a span of 45 minutes, she said. It was backbreaking work – at least six Citadel staff members suffered injuries from the evacuation process.

"They wouldn't leave until the work was done, until the residents were OK."

Once everyone was out, staff and bystanders went back in to do checks of all the rooms to make sure no one was left behind. They checked under beds, the bathrooms, anywhere someone could hide. The next step was to get all the oxygen containers, medication, and resident charts out of the building. Responders also managed to save the care centre's pet birds.

"That was the overwhelming thing, we evacuated our building without the fire department. It was the community. This entire event, as catastrophic and as horrific as it was, it also has just been the most heartwarming show of community involvement and support."

She said conversations with facility operator Qualicare Corporation will happen in the future to discuss how to make sites better prepared for emergency evacuation.

In the days after the fire, residents were taken to long-term care facilities in the St. Albert and Edmonton area until Alberta health officials approved moving seniors back in on May 11. Last week, residents at the Citadel Care Centre were welcomed back home with cheers and applause.

Staff began swabbing residents as they returned to make sure no one had contracted COVID-19 during rescue efforts. Some public health protocols had to be put aside as first responders prioritized making sure everyone got out of the building safely.

According to AHS, one person who was present at the scene had COVID-19 during their two-week incubation period, but they weren't infectious at the time. So far, there are no confirmed COVID-19 cases involving people who may have been involved in the fire response,

"Based on contact tracing and the timing of the positive result, it was determined the person was not infectious during the evacuation process," wrote Kerry Williamson, AHS spokesperson, in an email to the Gazette. AHS declined to confirm whether the positive case involved a staff member due to privacy concerns.

As of Monday, no residents at the Citadel Care Centre had tested positive for COVID-19.

When asked about the COVID-19 case, Schnepf said she isn't surprised to hear there could have been some transmission.

"The bulk of the people who came to help were young people because they knew we needed muscle. The young people have not been eligible for vaccines for very long, so fewer of them are vaccinated."

When asked by the Gazette, Williamson said AHS is not recommending for people who aided in rescue efforts to get a COVID-19 test. At Citadel Care, Schnepf said they're advising anyone who was there to get swabbed as a precaution.

"At our site, we will continue to swab people and I emailed all the family members saying if you or someone who you know was on site at the fire or the (St. Albert Inn), you should get swabbed."