An Alberta RCMP group is leading the way when it comes to tracking down the deadly opiate fentanyl. The Alberta RCMP drug dog unit based in Innisfail has created a unique method for training Canadian narcotic dogs to sniff out fentanyl.
0
Feb 20, 2018 12:10 PM By: Jennifer Henderson 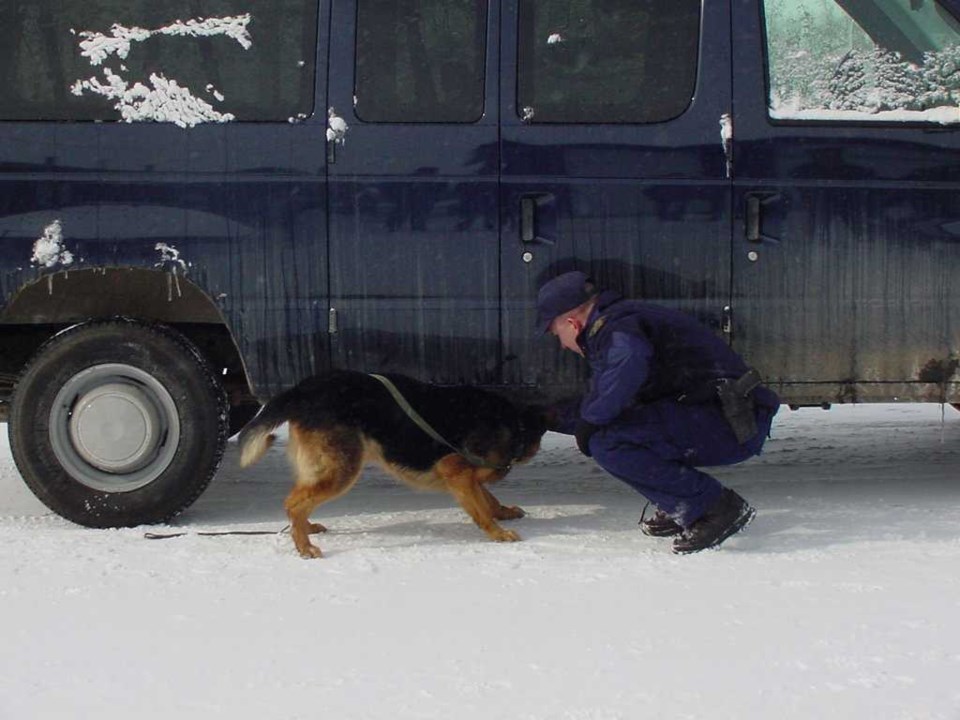 A drug dog searches for fentanyl under a vehicle with the aid of the dog handler. The pooches trained at the RCMP police dog training centre in Innisfail, Albert are first trained to sniff out a liquid form of the substance before they exposed to the powder form. Once they complete their training they are able to track trace amounts of the deadly drug.

An Alberta RCMP group is leading the way when it comes to tracking down the deadly opiate fentanyl.

The Alberta RCMP drug dog unit based in Innisfail has created a unique method for training Canadian narcotic dogs to sniff out fentanyl.

The drug can be deadly and in its pure form a few grains of the substance can be enough to cause an overdose.

Staff sergeant and senior dog trainer with the RCMP Gary Creed said that having the dogs trained to find the drug helps to take the deadly substance of the street. He said dogs are able to smell out substances that can slip past humans.

“It gives us the ability to take that extremely dangerous drug off the streets. It gives us another tool to combat the drug trade,” said Creed who is based in Innisfail where RCMP dogs in Canada are trained.

The RMCP program is so unique that many municipalities, states, countries and organizations have reached out to them to help train their dogs to sniff out the drug. Creed and his team have helped train American Homeland Security, the Drug Enforcement Agency and sheriff’s departments across the country. They recently travelled to Mexico to help train authorities on the unique drug tracking system.

“We are super proud of our dog program. We like to think that we have one of the best police dog services in the whole world,” Creed said.

Creed said that when the drug first appeared in Canada the animals were trained to smell out other illegal drugs and substances but the pooches had no way to tackle the deadly opiate. The dog team knew they wanted to do something to help battle the rising fentanyl epidemic, but did not want to expose the animals to the potentially deadly drug.

To solve the problem the team found inspiration from bombs. One of the homemade explosive devices that the RCMP encounter is extremely volatile and in order to train the dogs safely scientists put the odour on a scent pad.

Creed and his dog team decided to try the same method with fentanyl. With the help of the RCMP Clandestine lab, trace amounts of the drug were liquefied and placed on a scent pad.

For the first trial the RCMP had vets and medics on standby, just in case the dogs or handlers required medical attention.

“Then we put out real powdered fentanyl in a very controlled environment and we found the dogs were able to transition from the liquid stuff to the powdered stuff,” Creed said.

Creed said that even though the dogs are being trained to track the deadly substance, there is no increased risk to the animals in the process. The dog trainer said that the pups would still be in environments where they could be exposed to fentanyl whether they were trained on the substance or not.

One strength in having the dogs trained, Creed said, is that the handlers have more education in dealing with the drugs and the dogs being exposed to the drug.

According to the RCMP, it takes the dogs around 20 minutes to learn how to sniff out the drug although the trainer said that each dog is given two full days of training. The project to have dogs sniff out the drug got underway in June 2016 and now all 117 of the drug dogs across Canada have had fentanyl added to the list of material they are able to track down.

Since the program has started in Canada the dogs have successfully found tens of thousands of pills. One particular dog team has found more than 30,000 fentanyl pills and an additional amount powder. The RCMP does not track exactly how many investigations the dogs have assisted in or the total amount of drugs found by the dogs but Creed said that overall they have had a lot of success with the program.