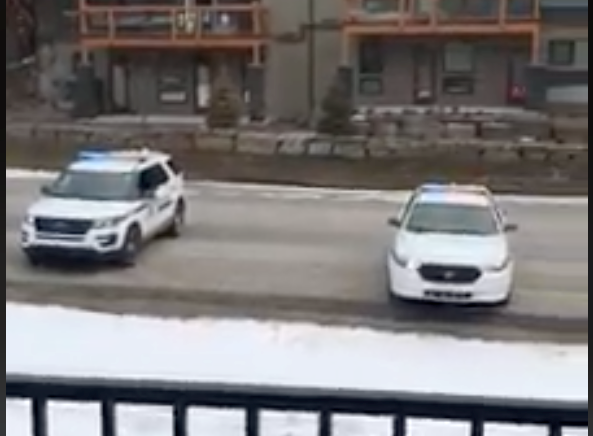 CANMORE – A global pandemic is one way to dampen a birthday party, but local RCMP weren’t going to see it ruin a local six-year-old's big day.

In fact, a few officers went above and beyond. Hendrix Hillier from Canmore was turning six on April 14, which typically would have been celebrated with family and friends during a party. However, due to COVID-19 coronavirus, Hendrix wasn’t able to have the party he wanted this year and some RCMP officers just weren’t going to let that slide.

What they did let slide, however, were the RCMP cruisers. A synchronized dance to the birthday boy's favourite song – practiced only once according to Darren Hillier, Hendrix’s father – and Happy Birthday sung loudly on intercoms was how some local officers turned the day around. Four cruisers showed up outside their home in Canmore and performed the dance and song, all of which Darren posted to Facebook.

“They blew it out of the water,” said Darren.

“He was ecstatic – he couldn’t stop smiling for the rest of the day.”

Darren said he had tried to organize a scavenger hunt for his son when a friend suggested they let the RCMP know about Hendrix’s birthday, but he never expected what they got.

"Hendrix turned six today and the Canmore RCMP made it extra special by completing a synchronized cruiser dance to his favourite song and singing him happy birthday," the Facebook post read.

"Big thanks to the members who came out this morning to make his day! We are so lucky to be a part of such an amazing community!"

The whole point, according to Darren, was just to provide a bit of joy.

“When it was brought to fruition, it was to make him smile and to sort of make up for that lack of being able to have all his friends over,” he said.

Hendrix said the display made him “happy" and that he's thankful for the RCMP officers who showed up, something Darren said definitely worked.

“The ultimate goal was to put a smile on his face and I think you can see at the end of the video, he’s beaming," he said.

“Definitely big thanks to the members of the … traffic unit and the municipal RCMP unit.”

About the Author: Alana MacLeod

Alana MacLeod is a reporter for the Rocky Mountain Outlook. Previously, she worked for Global News Toronto as a news producer and writer. Follow her on Twitter: @Lans_macleod
Read more