When the Honda Ridgeline pickup debuted in 2006 I didn't see it as fitting the role of a real pickup truck. Although its looks mimicked those bigger pickups, Honda clearly saw a use for their new truck others didn't.
0
Feb 28, 2017 11:00 PM By: Garry Melnyk 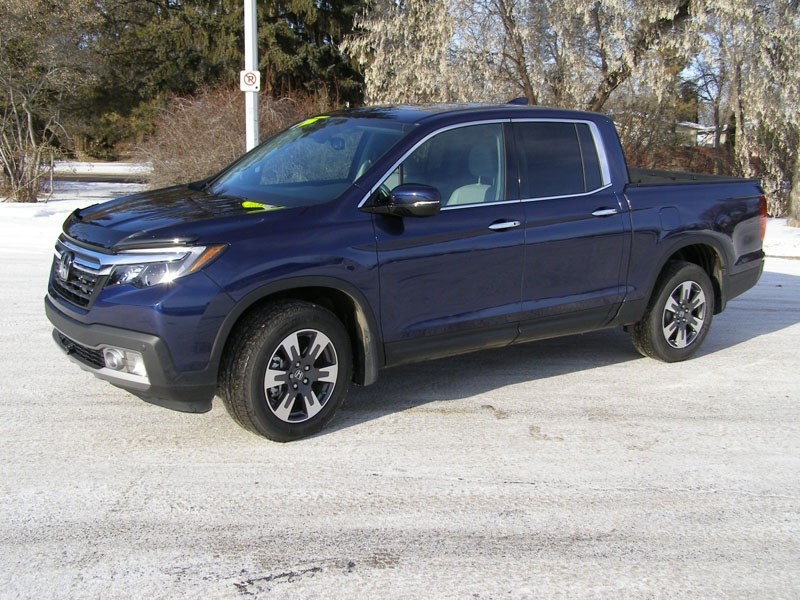 Honda has redone their Ridgeline pickup truck and I'm impressed enough to say I wouldn't mind one in my driveway.

When the Honda Ridgeline pickup debuted in 2006 I didn’t see it as fitting the role of a “real” pickup truck. Although its looks mimicked those bigger pickups, Honda clearly saw a use for their new truck others didn’t. Many were sold as people in North America could see how a Ridgeline fit in with their lifestyle. Now Honda has redone their truck and I’m impressed enough to say I wouldn’t mind one in my driveway. My better half also took a shine to the Ridgeline in part I’m sure because of the Obsidian Blue Pearl exterior paint. Mrs. M. likes the colour blue.

There’s little doubt you’re not buying a Ridgeline for the farm, dodging cow patties in a field while hauling a bale in the back or to carry some heavy stuff to a well site. This truck is aimed at us city slickers to haul bags of leaves, lumber, small furniture, while at the same time doing the chores in comfortable seats with large windows and plenty of power from the V6 engine under the hood. The 2017 Honda Ridgeline has a role in the truck market for people who don’t need a full-size pickup.

In other words it’s designed for people like me. I think the exterior now more rounded than the previous model, looks good with the exception of the mashed-up front end. Look at a side profile of the Ridgeline and you see how it resembles some of the North American pickups we’re most used to. As a mid-size truck the Ridgeline is not too big and not too small fitting nicely in most garages. Honda says it’s capable of hauling a class-leading maximum 1,584 pound payload capacity (varies by trim) and could tow up to 5,000-pounds depending on model and powertrain. One clear difference from other pickups is the unibody construction, which prevents that disconnect between front and rear that body-on-frame trucks suffer.

The grunt to tow comes from a more powerful and efficient direct-injected 3.5-litre i-VTEC V6 engine and a six-speed automatic transmission with wider ratio spread and available new Intelligent Variable Torque Management. The most advanced AWD technology in the midsize truck class with all-weather traction and handling capability. The engine has a peak output of 280 horsepower (+30HP over the previous model) and 262 lb.-ft. of torque (+15 lb.-ft.). The 35.4kg average reduction in curb weight and a more aerodynamically efficient exterior design, combine to deliver quicker acceleration and better fuel consumption. The Ridgeline is rated at 12.8L/100 km in urban driving and 9.5 on the open road, Very close to what I achieved in my AWD “Touring” model.

The premium quality of the new Ridgeline also shows in the interior, where designers have applied high quality, soft-touch materials throughout the cabin and added thoughtful details such as LED map lighting. Additional high-end amenities include a standard 4.2-inch colour display, standard heated front seats and available heated steering wheel, heated rear seats and ventilated front seats. The Ridgeline’s 60/40-split and folding rear seat offers roomy seating for up to three passengers. With the seat bottoms folded up it’s possible to carry bulky items like a 47-inch flat screen television or a mountain bike with the wheel intact. Exclusive in its class, the Ridgeline’s large under-seat storage area can carry long items, such as golf clubs, with the rear seats folded down.

The 2017 Ridgeline’s new ultra-high-strength steel-reinforced SMC composite bed is longer and wider than in the previous model and is the only bed in the midsize class that can flat haul four-foot-wide items, such as drywall or plywood panels on the floor between the wheel wells. The bed does not need a liner like conventional steel beds. The new Ridgeline bed also boasts numerous Honda-exclusive features and capabilities, including a highly versatile Dual-Action Tailgate and a redesigned In-bed trunk with fully flat floor. An available 115V AC in-bed power outlet with up to 400-watt charging and eight standard 350-pound tie-down cleats complete the Ridgeline’s capable and versatile bed design.

The new Ridgeline delivers the most advanced technology and connectivity that Honda has to offer, including a standard eight-inch capacitive touch screen Display Audio connectivity interface with both Apple CarPlay and Android Auto compatibility for seamless integration of compatible Smartphone features and functions, including Smartphone-powered navigation capabilities. The latest in safety features are also available no matter which Ridgeline model you choose. The LX is the entry level at a starting price of $36,590 with front-wheel-drive. My well optioned Touring model started at $47,090.

In short, a nice sized pickup for the city that’s good on fuel, has a comfortable ride, good handling, great visibility, minimal road noise and still capable of doing some tough chores when needed.