Morinville Public students will be turning scrap metal money into chickens next year with the help of a grant from the Sturgeon Refinery. North West Redwater Partnership announced the winners of its Waste Into Worth contest last week.
Nov 27, 2018 4:55 PM By: Kevin Ma 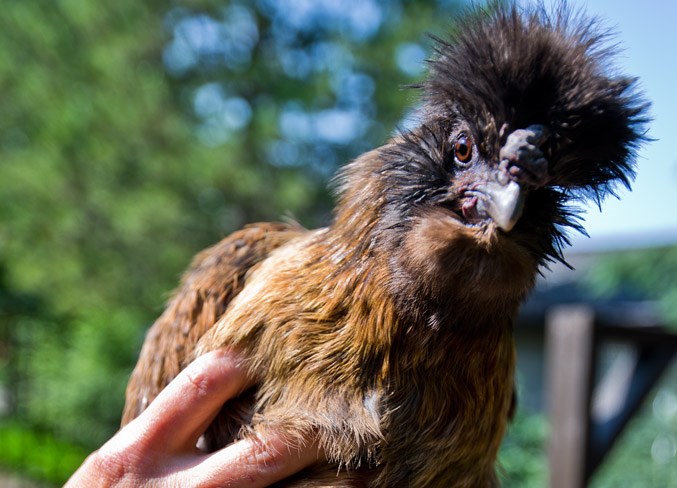 FUTURE STUDENT? – Morinville Public students will soon be caring for chickens next year thanks to a $3,000 grant from North West Redwater Partnership. The grant was part of a $10,000 contest run by the group behind the Sturgeon Refinery meant to encourage waste diversion. This particular chicken lives in St. Albert.

Morinville Public students will be turning scrap metal money into chickens next year with the help of a grant from the Sturgeon Refinery.

North West Redwater Partnership announced the winners of its Waste Into Worth contest last week.

The company, which runs the Sturgeon Refinery, has managed to keep 95 per cent of the waste generated by the refinery’s construction out of the landfill, recycling some 3 million beverage containers and 6.6 million pounds of scrap metal in the process, the company website reports.

That’s earned them a lot of recycling money, and they’ve so far given some $500,000 of it away to community groups, said North West spokesperson Vanessa Goodman.

“When you’re really dedicated to recycling that waste, it adds up to a lot of refunds in the end.”

North West launched its Waste Into Worth contest in September to celebrate this milestone, Goodman said. It asked county residents to submit ideas for projects that would take waste and turn it into something valuable, and promised to distribute $10,000 in grants to the top entries. The company got 17 proposals and picked 10 winners.

Morinville Public teacher Monique Webb said the Learning Farm came about as a way for the school to use some wasted space in its yard.

“I live on a farm myself and I have chickens,” she said, and the school’s Grade 3 students already hatch chicken eggs as part of their science lessons.

“We thought if we had some chickens in there, we could feed them some of our leftover scraps.”

The plan is to build a chicken coop on the school grounds and keep five to 15 hens in it, Webb said. (Morinville residents can keep chickens in town by getting a unique animal permit.) Students will take turns sorting classroom waste to get non-meat, non-dairy food scraps for the chickens (the birds will get regular food as well) and learn how to care for the birds. Students will collect the birds’ eggs for the school’s Food for Thought lunch program and compost the chicken manure for use in the school’s vegetable garden.

The chickens will help the students learn about the needs of plants and animals, life cycles, composting, egg production and economics, Webb said. There may also be some science and engineering opportunities if the students want to trick out the chicken coop. Guests from the nearby daycare and seniors’ home might want to visit the chickens, while others might get to watch the birds via a “chicken-cam.”

Webb said the school was in the planning stages of this project, but hoped to have birds on the ground early next year.

“We think it’s going to be very exciting.”

Landing Trail and Lilian Schick schools got $1,000 each to get tools with which to dismantle and rebuild electronic waste in their makerspace areas.

“Technology is advancing quickly,” said Erica Foster, makerspace manager and library technician at Lilian Schick, and students can learn how it works by taking it apart.

Using screwdrivers and soldering irons, Foster hopes to have students take apart items such as keyboards and CD players and repurpose them into either usable gadgets or sculptures, keeping waste out of the landfill.

Landing Trail also got $500 for an outdoor classroom.

Redwater School picked up a total of $3,000 to compost food scraps for its vegetable garden, grow food in an aeroponic food tower and install waste-separating trash bins. Morinville Community Gardens, Cardiff Park and the Sturgeon Learning Centre each got $500 to build raised garden boxes, compost bins and a composting program, respectively.

While Waste to Worth was a one-time initiative, Goodman said North West planned to continue funding other projects through its community investment program. Email [email protected] for details.