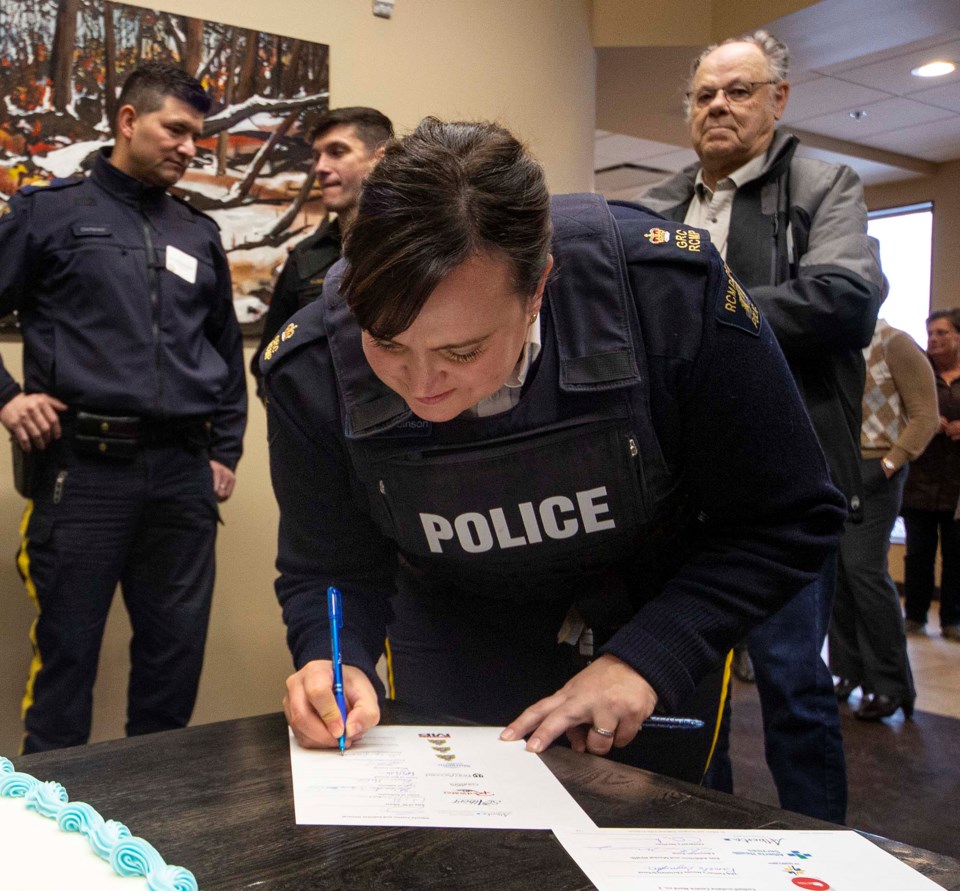 St. Albert RCMP Insp. Pam Robinson joined the City of St. Albert and over a dozen other regional partners who all signed the Violence Threat Risk Assessment Protocol (VTRA) in the city on Wednesday. The joint agreement between St. Albert and area governments, police, schools and health services aims to identify children who are at risk of causing violence towards themselves or others to get them the treatment they need in hopes of stopping school shootings before they start. CHRIS COLBOURNE/St. Albert Gazette

Schools, police and community leaders signed a deal this week that could help prevent school shootings.

About 90 people were at the St. Albert Curling Club Wednesday to witness the signing of the St. Albert regional Violence Threat Risk Assessment (VTRA) Protocol.

A partnership between 17 organizations, including the City of St. Albert, Sturgeon County, the armed forces, the province, the RCMP and all four area school boards, the protocol creates a common framework within which the groups will co-operate to spot youths at risk of committing violence and get them the help they need. In signing it, the groups commit to participating in specialized VTRA training and to use the protocol in emergency situations.

This agreement is all about stopping the next Columbine or Taber before it starts, said Mayor Cathy Heron, referring to two infamous school shootings.

“This protocol will help identify those kids at risk ahead of time.”

VTRA is the brainchild of Alberta’s Kevin Cameron, who led the crisis response to the 1999 school shooting in Taber, said RCMP Cpl. Laurel Kading, who sits on the VTRA steering committee.

“It’s a simple, straightforward method that allows agencies to communicate well and do what they need for the safety of all the kids,” she said, and it’s in use across North America.

VTRA consists of front-line observers and an expert team operating under a common set of rules, Kading explained.

“Let’s say there’s a student who brings a knife to school,” she said as an example.

Normally, a principal would investigate, probably take the knife away and maybe suspend the student. But because they’re acting in isolation, that principal doesn’t have the full picture – maybe the kid threatened someone with the knife at the library the night before and told his coach he carries it to protect against bullies. The knife is gone, but the risk of violence is still there.

VTRA creates a list of symptoms (such as bringing a weapon to school) that indicate elevated risk of violence and trains front-line observers to spot them, Kading explained. When they do, those front-liners (here, the principal) call that expert team to check if the youth has shown symptoms elsewhere in the community. If the team sees a pattern of behaviour indicating high risk of violence, they move in to work with the parents to get the youth whatever supports they need to get out of danger.

“It’s everyone working together to make sure everyone is safe.”

Community groups decided to form a VTRA here about four years ago to better co-ordinate their efforts to support youth, said VTRA committee member Renee Lukie of St. Albert Public Schools. The committee has spent the time since then working out the legalities of it and training front-line observers such as principals, counsellors, police officers and leaders in how to use it.

Area parents will now get letters from their school boards explaining the VTRA process and how it will be used, Lukie said. Kading said the committee had already done a few test runs of it and helped several families find much-needed support.

VTRA is a reminder of that old adage that it takes a village to raise a child, Kading said.

“The St. Albert and Sturgeon region is such a village, and VTRA is one tool that will help us continue to be one of the safest regions in Canada.”