Residents, councillors voice concern about plan for highrises in Oakmont 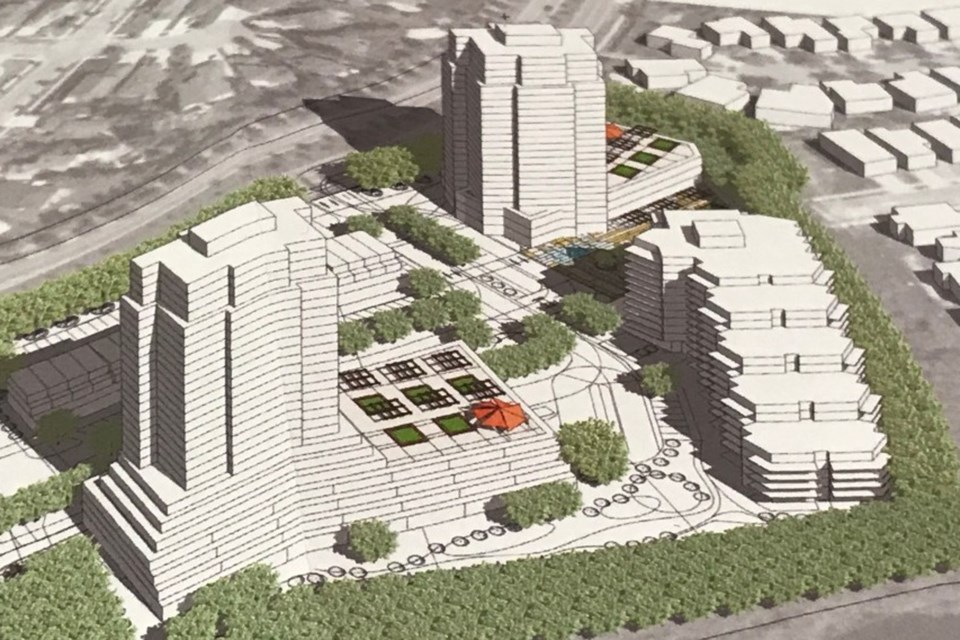 A 3D-concept image for Riverbank Landing.

Tensions reached near boiling points Tuesday night as Boudreau Communities unveiled its plans to construct two highrises over 25 storeys each along with over 500 housing units in Oakmont.

More than 150 Oakmont and area residents attended the open house to see plans for Riverbank Landing, a mixed-use “urban village” slated to be complete by 2028. Boudreau is the development company behind Botanica.

Boudreau president Dave Haut said the development will be an urban village with a “live, work and play” environment. It will be on the parcel of land east of Botanica, where Hole’s Greenhouses used to be.

The proposal is set to be built in three phases over seven to nine years, and includes plans for six buildings. Those include 25-and 28-storey residential towers with main floor commercial space; a 12-storey private seniors housing unit; new restaurant with conference space; two commercial and professional buildings, each three stories; and a 23,100-square-foot “village square.”

Haut said the commercial space would bring in more boutique shops, similar to those already at Botanica.

Parking would be provided underground for the residences and business owners.

Some residents said bringing this development to the community would force them to move out of their dream homes.

One Orchard Court resident, Dan Basso, said he is “fully of anxiety” about the proposal.

“If this tower goes out – I know I’m just one person – but you’re forcing my family out,” he said. “I built my dream home there. (The tower is) an eyesore.”

Many residents commented on the beauty of St. Albert, and how a couple of skyrises would ruin the area’s skyline.

During the presentation, Haut said Boudreau thinks two tall towers is the “best way to develop” the site.

“We do have the choice; we could do a lower, long, big building that casts a bigger shadow and takes up more scenery. Or we could do skinnier towers,” he said. Haut added a skinnier tower’s shadow would pass across neighbouring properties in a matter of 30 minutes.

In a later interview, Haut said Boudreau is “willing to look at adjustments,” which may include moving one of the towers or reducing the towers’ height “somewhat.”

Boudreau has not submitted its application to the city yet but plans to do so next month. The application would include amendments to the Oakmont area structure plan (ASP) and land use bylaw to accommodate for mixed use development.

Haut said Boudreau hopes to have shovels in the ground by next summer.

Mayor Cathy Heron said in an interview council is responsible for approving heights of developments, so that is something they will look at when the proposal comes before council. She added she thinks it will be a “long haul” and there will be development on the site, but it will be a bit of “back and forth negotiations.”

“I do think a highrise in a downtown is a bit more appropriate than in other residential areas, but it’s a good conversation to have with the community and whether they’re ready for it,” Heron said.

During Boudreau’s presentation, the development firm touched on some concerns outlined by residents, including how adding 500 residential units to the currently congested area would impact traffic.

Results from a traffic impact assessment compared current traffic levels with how some proposed measures would address congestion, if Riverbank Landing were to go ahead as proposed. The assessment examined traffic at peak hours during the school year and showed significant issues already exist at the intersection of Bellerose Drive and Boudreau Road.

Boudreau has hired Arc Studio for architecture and planning work, and senior planner Nola Kilmartin said the City of St. Albert is already looking at making some traffic improvements to the area, which are “needed even without this project.”

Kilmartin went over some of the proposed measures, with projections on how they could impact traffic after Riverbank Landing is built until 2034. Those measures include: a new right turn lane heading northbound on Bellerose Drive at Boudreau Road, a new shared left/through lane heading south on Bellerose Drive and reconfiguring signal timing. Addition of artificial intelligence timing was not factored into traffic flows.

“Between these two we know it will make it better; we don’t know quite by how much,” Kilmartin said.

One resident, Donna Sokolik, called the traffic situation in front of Botanica a “quagmire” and said when Botanica was proposed, traffic projections “said it will be fine.”

“Well it’s not. Everyone knows it’s a quagmire down there. You’re going to get more people coming in from Sturgeon (County), you don’t have control of that,” she said, adding Botanica 2 has not even been finished yet.

Haut said in an interview Boudreau would go back to its traffic engineers and “see if they have any other recommendations.”

The potential impacts of shadows from Riverbank Landing were also discussed, and Boudreau presented the findings of a sun shadow study which some residents described as incomplete. The study showed concept photos of how shadows would fall on neighbouring properties at three times of day during the spring and winter solstice.

Haut said Boudreau would be conducting extra sun shadow studies, one for each season.

Other residents said Riverbank Landing would ruin their view of the river valley.

Donna Chorley said when her family built their home 22 years ago, they did so on a promise from the city and developer Landrex Inc. that nothing more than a two-storey single family dwelling would take up the skyline.

“We bought and built for the view. High rises, they are already impeding our view somewhat, but these will definitely impede our view as well as the traffic,” she said.

Some homeowners immediately adjacent the parcel of land had objections about privacy, worrying new residents in Riverbank Landing would be peering directly into their homes and yards.

Haut said during the open house presentation “massive” mature trees on the perimeter of the site would be preserved and screen the site. In addition, he said privacy would be reinforced through “site design and architecture.”

Yet others questioned whether there is even market demand to call for such a large development, including St. Albert's mayor.

“It would surprise me that there would be (market demand) because those towers are expensive to build. I question that,” Heron said in an interview, adding she wants to see a market analysis done.

Haut did not say whether a market demand analysis has been conducted, but said Botanica has more demand than they can provide for. Boudreau has “enough confidence that this will be full,” Haut said, but construction would not proceed until there was a “proven market demand.”

“It will be based on pre-sales to go ahead,” Haut said.

Coun. Ken MacKay attended the open house and said his concerns were highlighted in many of the residents’ comments.

“My first impressions is, I just think it’s really aggressive and it’s a large footprint,” he said. “I know it’s going to be built in phases, but I really am concerned about the traffic, the size of the buildings and the environmental impact.”

During the open house, some residents touched on concerns about the environmental impact of such a development so close to the Sturgeon River. MacKay said an outfall exists just north of Botanica 2.

“The plants and the watershed is an important filter for the river so I’d have some concerns about the impact of that on the river,” he said.

According to Boudreau’s schedule for Riverbank Landing, the company plans to submit a formal application to the city in October. An optional second public participation meeting could be held after that point, although Haut would not commit to one.

Boudreau’s schedule has a decision from council set for March, and a development permit application is set to be made next spring.

A group of Oakmont residents have started a Facebook page to keep area residents informed on the project. It is called “Oakmont Boudreau Development – Concerned Residents,” and people can also sign up to be on the mailing list by emailing [email protected] or phoning 780-700-5153.