Harpe remembered for his ability to make friends with ease and generosity
Jan 19, 2020 3:40 PM By: Hannah Lawson 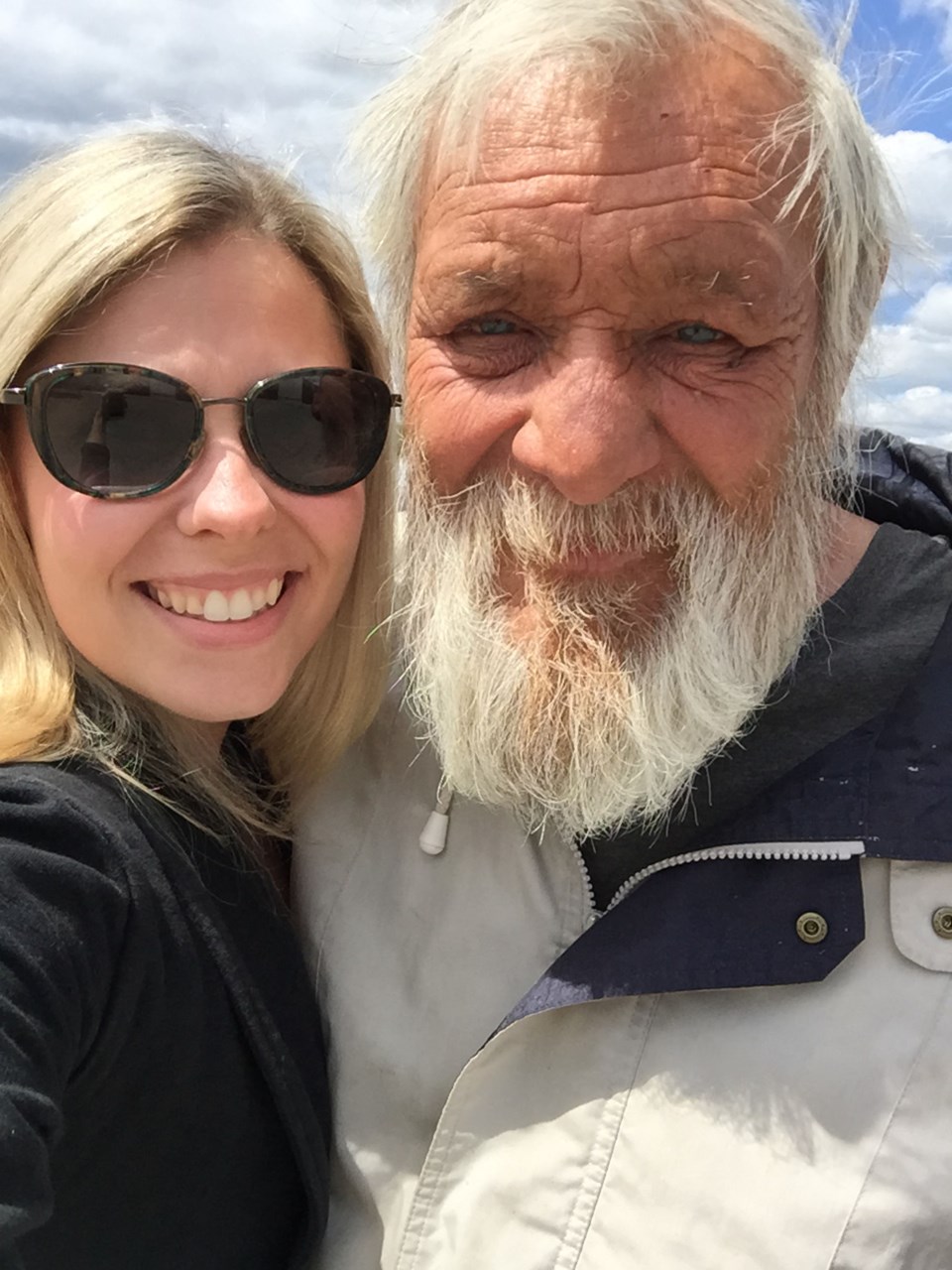 Bert Harpe and Layna Haley
He knew no strangers.

He was a giant with the most tender of hearts.

He was willing to strip the shirt off his own broken back for anyone in need.

He was a successful St. Albert businessman and a proud father.

His name was Bert Harpe, and St. Albert residents are devastated at the loss of a face familiar to many.

Bert was the affable “gentle giant” hunkered down outside stores and on park benches – always ready for a gab with a beaming smile. He had the secret sauce to transform anyone from stranger to fast friend.

For the past 10 years, Bert lived on the streets of St. Albert and made a truly remarkable name for himself.

An “in-memory” Facebook page made in Bert’s name after his Jan. 8 passing has garnered nearly 250 followers from people eager to share a wealth of Bert stories.

“He had this this quality that not too many people have; no matter who met him, they liked him,” said Suzan Krecsy, executive director for the St. Albert Community Village and Food Bank. “He made you feel like you were the only one in the room – and he had a great sense of humour.”

Bert, 67, was fondly known as the “gentle giant” around the community village, where he was a central figure. Krecsy said his absence leaves a “big” hole behind.

“The shirt off his back”

Born and raised in the Lac La Biche region, Harpe relocated just outside St. Albert with his wife and newborn Sheldon when he was about 18.

Shaun Harpe (Sheldon's brother), told the Gazette the young family made their home on an acreage just outside Calahoo for 13 years.

Bert kept many irons in the fire, and Shaun said he’s still not sure how. In addition to raising two sons heavily involved in St. Albert hockey – and occasionally stepping up to coach – he ran a successful concrete company (that changed names over the years but was most recently Harpe Bros. Concrete Ltd.) for 38 years, and was involved in dog sled racing around Canada.

At one point, Shaun said his father was keeping up to 200 dogs. It was an exorbitant cost to feed all the dogs, but Shaun said some of the feed came from over-populated beaver and muskrat Bert shot with special permission from Sturgeon County.

“I think he just loved the animals so much,” Shaun said.

The son said his father was always open-handed, even when times were tight financially. Sometimes, Bert would foot the bill for some of his sons’ hockey teammates who wouldn’t have been able to afford their gear, dues or road trips otherwise.

Bert also went out of his way to hire people experiencing homelessness onto his concrete company crew. Shaun said it did not stop there: Bert would make sure they got to and from work every day and helped them find housing.

“He was always kind of helping out the less fortunate,” Shaun said. “He would give you the shirt off his back, he really would.”

As with many people, Bert’s story is a checkered one, and his struggles with alcoholism eventually led to him landing in a position similar to the houseless crew members he tried to help so many years before.

Even as a man experiencing homelessness, Bert’s hands were always open in a gesture of generosity, and he remained a gentleman to the last day.

Layna Haley met Bert as so many St. Albertans have – she came across him sitting on a bench outside a pub one evening. He made a strong impression on her, and she started seeing him everywhere. They became fast friends.

It was when Bert landed in hospital that their relationship was transformed from friend to family, and Haley became like kin to Bert.

He had a “very kind heart,” and one year for the birthday of Haley’s daughter, Alexa, Bert spent weeks obsessing over what the perfect gift would be. Somehow Bert got himself to Walmart and picked a little pink bear and had some friends at the pharmacy keep it for him until the big day.

“He was so excited to give that gift; he sacrificed a lot,” Haley said.

Often Bert would “tag up” on errands – what Haley fondly remembers he called it – and Haley vividly remembers one shopping trip to Walmart.

Bert stopped in every single aisle to say hi to someone he knew, and Haley said he knew probably 90 per cent of the people. The other 10 per cent quickly became new friends.

“He knew no strangers; it was one of my favourite things about him,” she said.

Through her relationship with Bert, Haley said he “completely changed” the way she felt about homelessness. Bert had what many would see as the “perfect life,” and yet due to challenging life circumstances he ended up on the streets.

“He loved us fiercely. And he was very, very special to our family and he gave us ... many life lessons,” she said. “Some of them were hard.”

St. Albert resident Michael Christensen said in an email he met Bert about a year ago, and the gentle giant gave him a chance to bestow lessons of compassion and basic humanity upon his children.

“Whatever demons the man fought, he was human and though losing seemingly everything – didn’t seem to lose his humanity,” Christensen said. “I will miss Bert.”

Another resident who met Bert during his years on the streets, Kayla Canning, said Bert once told her that material possessions are meaningless – it is the people who matter.

The love St. Albertans had for Bert was widespread. Kreczy said she would often spot Bert asleep on a bench in the mornings with a Tim Hortons bagel and coffee waiting for him.

“He always woke up to breakfast,” she said. “Everybody took care of him.”

But while the community always had an eye out for Bert, in actuality it was he who was making a difference in the lives of those he came in contact with.

Community Village community liaison social worker Vivian Collacutt said while many of the stories about Bert shared on Facebook relate how various people helped Bert, the key hidden message is his lingering impact them.

“It's all about how he helped them ... how he provided,” Collacutt said. “Even though he was the face of homelessness in a sense ... it's bizarre the impact he had.”