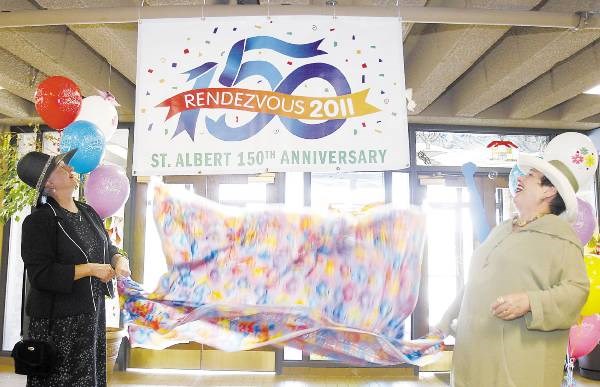 The 150th celebration committee kept Paul Kane’s doors open for two nights to hear ideas from community organizations and the general public about what type of events should occur during St. Albert’s big anniversary in 2011.

Ideas included a special mass to celebrate the city’s religious roots, block parties, galas, garden shows and even acting troops that would perform, throughout the city, moments from St. Albert’s history.

Although the festivities are still more than a year and a half away, volunteers have been assembling for nearly a year. So far the plan is to have some sort of celebratory event — big or small — every day during 2011.

“I’m really encouraged that so many are excited about the events going on already, and are ready to prepare for the next two years to ensure that it will be a great 2011,” said Crich.

On Monday, the committee unveiled its logo with a vision statement and values for the celebration. The event is titled “Rendezvous 2011,” a name that means a gathering or meeting place for residents of St. Albert in 2011, a place where goods and information can be traded.

Committee chair Margaret Plain said it would have been nice if more people attended the public forums, but the group already has more than 100 ideas and will do everything it can to have something celebratory occur on each day of 2011.

“We’re going to try to make use of every opportunity,” said Plain, who was also a committee member for St. Albert’s 125th birthday in 1986.

The committee has already applied to have a commemorative stamp struck that would be distributed across Canada for the event. Plans are also under way to have the Founders’ Walk, a trail that commemorates the city’s first families from downtown to Grain Elevator Park, completed and unveiled in time for the celebration.

Other ideas for the celebration include a re-enactment of the Métis buffalo hunts from centuries ago, and Plain said if Anthony Henday Drive is completed in 2011 that could be celebrated as well.

“We have a history of having some celebrations about what one might consider ordinary things, but nonetheless are extremely important to the community,” Plain said, recalling that in 1952 residents celebrated the city’s first sewer and water system.

Crich said the group has received dozens of ideas for the event from residents through email, and the next step is to form sub-committees to cultivate the ideas. The committee is still actively pursuing volunteers to fill those roles.