Before he gets to Bellerose Composite High School's front door, resource officer Const. Dave Henry is dealing with the day's first issue. A 15-year-old student took her mother's car keys this morning, which she has done before.
0
May 20, 2009 12:00 AM By: St. Albert Today Staff 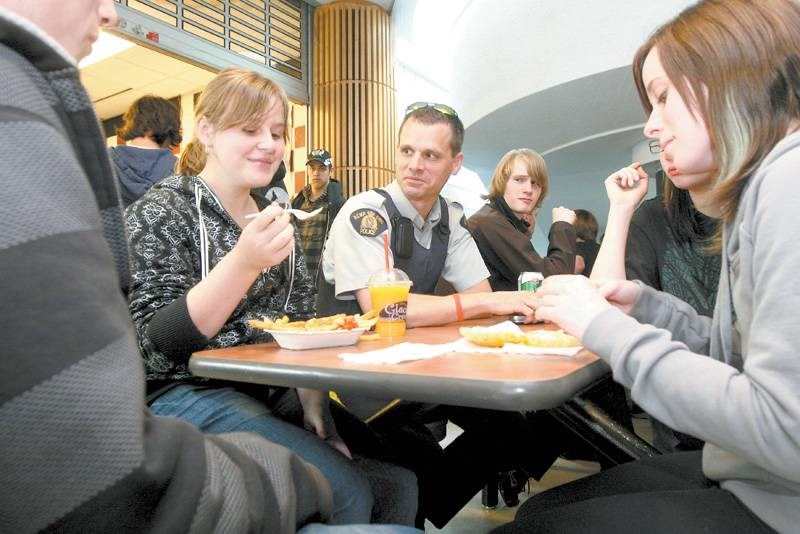 Before he gets to Bellerose Composite High School's front door, resource officer Const. Dave Henry is dealing with the day's first issue.

A 15-year-old student took her mother's car keys this morning, which she has done before. The car is still where it should be, but the young girl had every intention of taking for a spin later and she doesn't have a licence.

The mother retrieved her keys, but knows it likely won't be a permanent solution to the problem, and as she runs into Henry coming out of the school she is clearly at her wit's end.

He touches base with principal George Mentz and then tries to find the young girl, but cannot. Henry makes plans to catch up with her later and try to get to the root of the problem.

Henry doesn't have a fixed schedule, but somehow still manages to constantly be on the move, in the hallways and common areas talking to students.

Less than a year into the position he knows many of the kids by name and makes a point of saying good morning to virtually every student.

Many area high school students have his cellphone number and text or call him. Earlier in the day he got a heads up about a fight that was supposed to happen at lunch, but Henry says sometime students just want to ask a question or talk.

He also has a Facebook page some students created for him where he chats with them occasionally.

"He is so connected with so many kids that when there is something happening that is going to be an issue he finds out," he says. "Most of the kids don't want bad things to happen."

"He has really worked hard over this year. He has done a lot of things to move the program around knowing kids."

Beside Henry's desk is his saxophone, for band practice at both schools. He says he sits in band, goes to sports games and goes on field trips so he can connect with students.

Throughout the day anytime Henry is in the office a student will stick his head in the door and sit down for a few minutes to talk.

Students stop him in the hallways to ask about locker searches and traffic tickets, while others invite them to their next class.

In Bellerose's cafeteria he finds a few students who aren't where they are supposed to be and encourages them to get to class. He escorts them just to be sure.

The detachment and the city have been using the U.S.-based 40-asset program to try and improve the lives of local youth and reduce youth crime. The program focuses on giving youth the assets they need to stay on the right track and the biggest part of it is involving adults with youth.

Henry says part of what he is trying to do is to let kids know they are valued.

"I make more of an effort to tell them they are good," he said. "I want them to know they are important."

Mentz says one of Henry's strengths as a school resource officer is his connection with all the kids.

"He will connect with kids who would never dream of getting into trouble, who probably have all 40 or even 50 assets, but he also connects with the kids who are struggling."

Insp. Warren Dosko says Henry and the other school resource officers are probably the biggest tools the detachment has to advance the 40-asset program.

"We want to incorporate him so that he can catch kids doing something right and enforce that behaviour."

At budget time Dosko received funding for another resource officer who will start working in the junior highs this fall.

"My goal is to have those types of resource officers in all of those high schools and the junior highs."

Henry's only scheduled stop of the morning is a classroom drug talk. He doesn't try to lecture kids about drugs in the typical fashion because he doesn't believe they need to hear it.

"These kids know more about drugs than I do."

Instead, he is remarkably candid with the kids during the talk and is willing to openly discuss everything they have encountered. All of the kids — in a class of nine students — admit to some experimentation or habitual use and none promise to stop at the end of the talk.

Henry is blunt and reminds the kids their dealers don't view them as friends, but as customers.

"They make a fortune off you guys."

One of the kids, while making it clear that he doesn't plan on quitting, does say he takes Henry's message to heart.

"I'd listen to you, but not the other cops."

The information Henry gathers also helps with the intelligence-gathering policing the detachment is trying to focus on.

Henry says last year's headline-grabbing froshing cases all came through relationships he had developed. He believes those relationships helped cut back, but not eliminate the problem.

"They aren't going on to buses and pulling kids off anymore or calling them at home and harassing them," he says. "They still do it, but it has gone more underground."

Dosko says Henry deserves much of the credit for that entire investigation.

"He was at the heart of that investigation because of the relationships he had," he says. "We see tons of information coming through him."