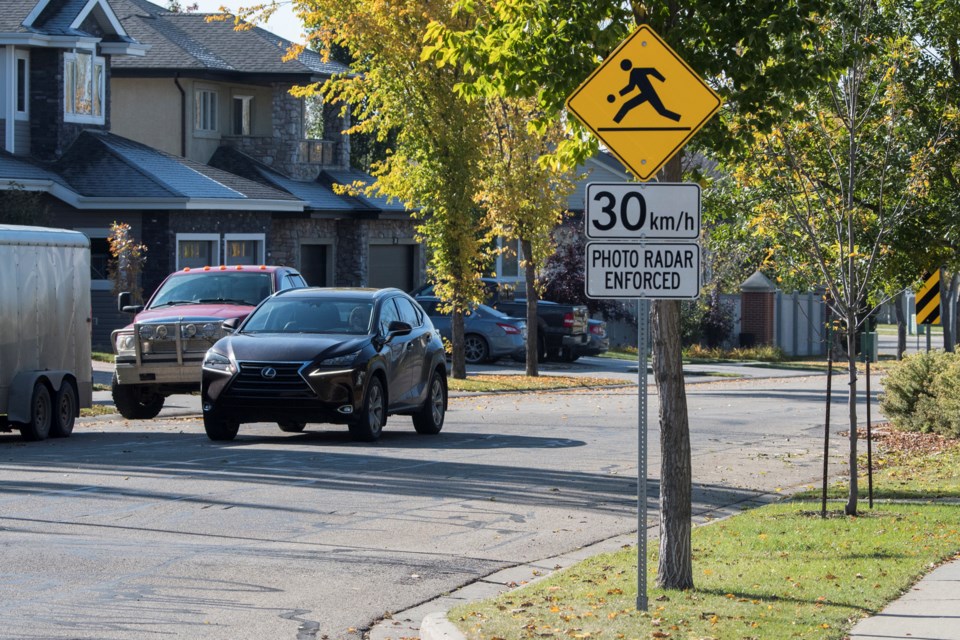 The review – conducted by ISL Engineering – suggests motorists could be given the ability to open up the throttle slightly more on some parts of arterials, but recommends local roadway speed limits be reduced from 50 km/h to 40 km/h.

Afterward, the three-person committee unanimously recommended council set aside $20,000 for public engagement on the proposed changes and set a public hearing date in July for amendments to St. Albert’s traffic bylaw.

“I’m not confident to say that we’re going to make everyone happy with whatever changes are ultimately implemented, but the one key component will be to rationalize – make it transparent as to the decisions that influenced the speeds and make it very public,” said St. Albert transportation manager Dean Schick when presenting the review.

Implementation of the recommendations would cost in the realm of $365,000, which would cover improved pedestrian crossings on arterials with increased speeds, signage and a public awareness campaign.

There could have been financial implications on St. Albert Transit of around $961,000, but on Jan. 20 city council approved transit service revisions that located savings and eliminated this increased cost.

While only one of St. Albert's elementary and junior high schools would qualify to be a playground zone under Alberta Transportation (AT) guidelines, the review recommends all elementary school become playground zones.

After modification of the criteria with a lower scoring threshold, the review found that all elementary schools – and no junior high schools – would qualify for a playground zone. Currently there are 18 existing playground zones.

Regarding the shift to an 8 a.m. to 8 p.m. set playground zone, Schick said that was determined based on collision data.

During his presentation, Schick said the review determined 50 km/h “may not be proportionate and relevant” for neighbourhoods.

He said this is because of parked vehicles alongside narrow roads, adjacent road use and design of the roads themselves.

“If you look at it from an aerial perspective, you can see that the community design, which is kind of relative city-wide, there’s often substantial curves up to 90 degrees within the typical designs of crescents and cul-de-sacs,” he said.

About 15 per cent of “severe incidents” over the past three years occurred on local and collector roads, Schick said the review showed.

But a map of the speed changes speeds will still vary by roadway, and still switch between 30 km/h and 70 km/h.

When Mayor Cathy Heron asked why some east-west arterials maintain 60 km/h their entire length, and other similar ones transition multiple times, Schick said he hoped to blanket arterials with one set speed limit.

However, arterials are not all one speed because Transportation Association of Canada (TAC) guidelines take into account factors such as accesses along the roadway and road design, he explained.

Heron asked whether St. Albert Trail could ever be bumped up to 70 km/h and was told TAC guidelines do not recommend that.

“It’s unfortunate because I feel like as we lower speed limits in residential, which I’m completely supportive of ... but when you slow people down there I want to funnel people onto the bigger roads and let them go faster there, to avoid the shortcutting,” she said.

Coun. Jacquie Hansen said feedback she has heard from residents is the road network is not cohesive.

“I’m hoping you can tell me that this review, you said it was holistic, will be able to sort those kinds of confusing areas out; it will be smoother and not so choppy with different speed limits,” she said.

If city council approves changes to the traffic bylaw, administration anticipates speed changes would come into effect in late 2020 or early 2021.

St. Albert’s speed review came out of the city’s transportation safety plan, which was adopted in the fall of 2018 and sets St. Albert’s mission to “Vision Zero".

The full review by ISL Engineering can be found on the city's website.