During its long history Mercedes Benz has built many noteworthy vehicles some of which became desirable classics. It is not likely the 2016 GLE 350 diesel Coupe SUV will join that elite group.
0
Mar 16, 2016 12:00 AM By: Garry Melnyk 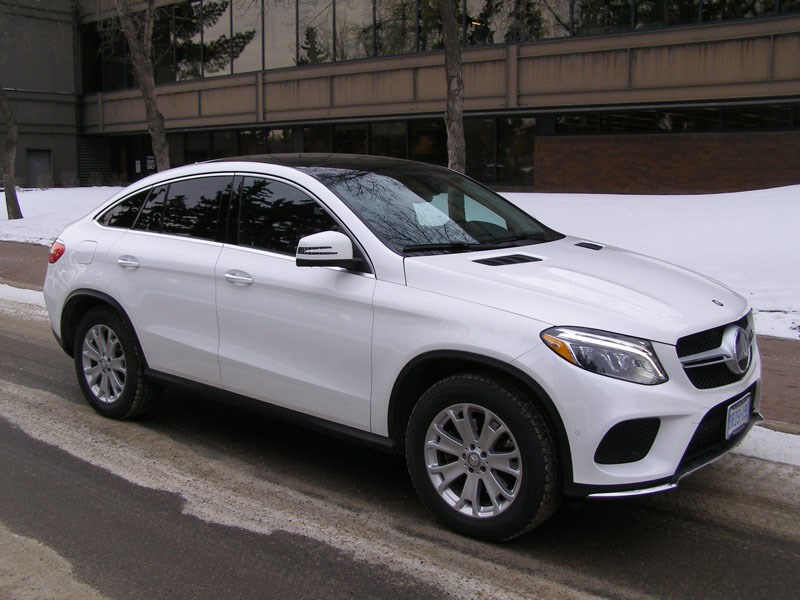 During its long history Mercedes Benz has built many noteworthy vehicles some of which became desirable classics. It is not likely the 2016 GLE 350 diesel Coupe SUV will join that elite group. This new crossover gives you a curved and less functional roofline which is supposed to enhance styling but doesn’t. For example, one evening while driving the GLE I'm coming up behind what looks like an identical white Mercedes SUV. As I get close to the bumper I quickly realize it's not a Merc, it's a 6 Series BMW sport Ute. How sad is that when two high-priced vehicles from different manufacturers look so much alike you can't tell the difference? Oh for the days when cars did not look the same. In my opinion the GLE is not very pretty. No matter what angle I took pictures this potato-like shape was just not pleasing to my eyes. The 19” wheels with winter tires didn’t help the overall look of the vehicle either, but styling is subjective isn’t it?

The GLE 350d is a large SUV that is big on the outside but for passengers not so much. All the fancy design work on interior panels has shrunk the amount of elbow room for front passengers. The wide centre console intrudes on front passenger space while the contoured and well-bolstered front seats are clearly designed for people with narrow bodies. My wife complained the high, right edge bolster hurt her thigh every time she climbed into the front passenger seat. I gave a co-worker a ride home and Malcolm told me his front passenger seat was just too narrow and uncomfortable. Rear seat passengers have a better experience and do okay for legroom. The other thing annoying about entering the front seat for a tall (six-foot, one-inch) person like me is the sloping A pillar. You have to bend your body and drop your head or you’ll whack your noggin on it. Another automotive writer, who is much shorter than I, had the same complaint. Really, this is a problem with short people too? Does Mercedes not have tall engineers in Germany? The high seating position also puts us tall guys (six-foot, one-inch for me) close to the sunroof. The narrow side windows hurt outward sightlines and the tiny rearview mirror doesn’t help rear visibility. The instrument panel looks dated in its overall design but that doesn't hamper reading the dials that have large numbers and letters.

In the rear, the cargo hold is wide and deep so I can’t knock that. You can carry a lot of junk and putting down the rear seat back increases capacity, but with the sloping coupe roofline height is diminished which would have increased capacity by a bit. The powered lift gate opens high, making loading a cinch.

One of the few things I liked about the 249 horsepower 3.5-litre diesel V6 was the exhaust note when you accelerated. Kind of a muted growl that made the hair on the back of my neck stand up. Doesn’t sound like a diesel. Yes the engine provides plenty of punch and diesel clatter was minimal if you stood next to the front fenders. Fuel consumption was also acceptable considering the size of this ugly SUV combined with winter driving conditions. I got 9.5L /100 km in mostly city driving and a sometimes heavy foot.

On the highway Mercedes says the diesel should get 8.2L /100 km. The engine is linked to a buttery smooth nine-speed automatic. There is ample torque out of the V6 so it certainly could pull a small trailer.

I also have to give some credit to the 4MATIC AWD which works well on slippery, roads and off-road. Getting traction never seemed to be a problem whatever the tires were rolling on. Not that many owners will go deep into muck, but the Mercedes would likely be able to handle such conditions if needed. You can adjust the suspension setting from comfort to sport depending on your preference for pavement. Either way the ride is smooth, but definitely stiffer in sport mode with the large wheels and tires.

The AMG sport package and exterior trim is a nice touch but to me makes no sense for a large SUV. AMG has built up a great heritage with high performance engines in really good handling cars. Not so sure slapping an AMG plaque on almost every model is a wise move. Anyway if you have money to spare and simply must have a coupe-like SUV from Mercedes, this might be it. There are two other models of the GLE in AMG trim they are gasoline powered and start at $77,600 for the V6 and $116,500 for a high-powered V8. My diesel tester started off at $72,300 and climbed to over $79,150 with a couple of AMG option packages. Freight and PDI is over $2,000.