Three days a week there is a large nine-year-old dog wandering the halls of Richard S. Fowler Catholic Junior High School. Bear, a black and grey Bouvier, is a staple in the junior high hallways.
Apr 29, 2017 12:00 AM By: Jennifer Henderson, Local Journalism Initiative reporter 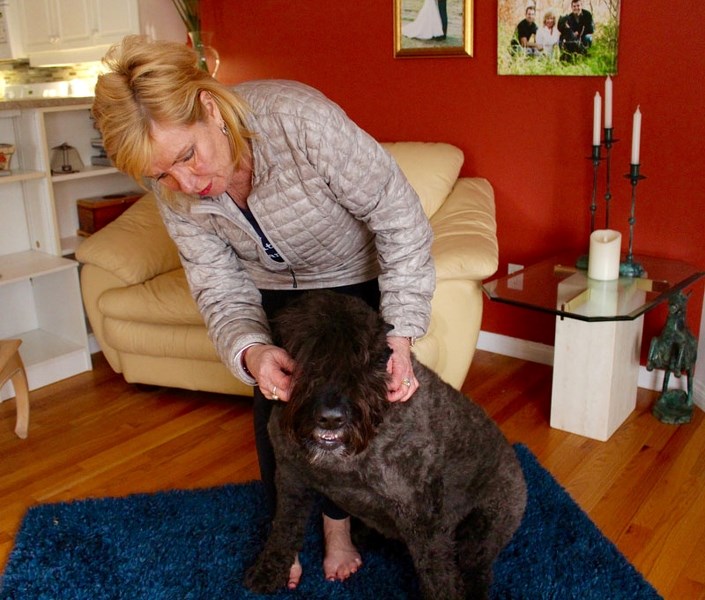 Bear, a black and grey Bouvier, is a staple in the junior high hallways. On Tuesdays, Wednesdays and Thursdays the therapy dog can be found welcoming kids to the school in the morning or in the counselling office with Holly Tibble, the school psychologist.

Tibble and Bear began working at the school in September and since their arrival the dog has made a special connection the kids and faculty. Kids and staff congregate around him and they light up when they see him in the hallways.

But Bear isn’t just at school to play with the students. He is a dog with a job.

Bear is a registered therapy dog, who is trained to spot anxiety and nervousness. He has spent years in Tibble’s private practice comforting persons with mental health issues and families going through difficult times.

“I don’t think there is a mental illness that a pet couldn’t help you with,” Tibble said.

Tibble, a registered psychologist, started her new post at Richard S. Fowler in September and asked the school if she could bring a dog with her.

At first principal Heather Chyzowski wasn’t sure how a dog would fit in, but she immediately began to see the benefit of having a therapy dog in the school.

Since his residence started in September, Bear has helped the students open up to Tibble and helped end the stigma around going to the counsellor’s office.

“The perception is that you have to be crazy to see a counsellor. That stigma is still there. He kind of seals the deal. They’re willing to take a risk because they get to see Bear. They see him in the hallways all the time so they come to the office to see Bear,” Tibble said.

Chyzowski said that she has seen a big difference in the way the students treat the counsellor’s office since the dog’s arrival.

Many students will come down to the office just to visit with Bear and will open up once they have relaxed on the floor while petting the dog. Other times students will just want to stop by and visit Bear, which turns the office into a social gathering point along with a place for treatment and help.

“Animals are unconditional, loving and it’s a safe place to fall. They’re never going to be angry with you, they’re going to love you more than themselves. They’re just really calming,” Tibble said.

Along with helping to connect with Tibble, Bear helps students connect with each other. When kids are having difficulty making friends or have disabilities that make it difficult for them to connect with their peers, Bear will act as a buffer and conversation starter.

Tibble has used Bear’s special connection with the students to create an anxiety therapy group at the school. A handful of kids meet weekly with the therapy duo to help combat their issues with socialization and anxiety. Bear is trained to help.

One of the students in the group, Grade 8 student Rachel Brown, made an immediate connection with Bear.

Thirteen-year-old Brown has an anxiety disorder and a non-verbal learning disability, which has caused her to struggle with isolation and depression. She has trouble socializing with her peers because she finds it difficult to read social cues. Typically she is very sullen and speaks very quietly with her shoulders sunken.

When she met Bear everything changed. Brown was able to relax around the dog. Her teachers said she would light up, speak loudly and even make eye contact with others.

“When she is with him she is able to express herself and be happier. She feels safe,” Tibble said.

After Tibble and Rachel’s teachers saw her with the dog, they contacted her mom. Sharon Brown decided it might be good for Rachel to get a service dog of her own.

Sharon began to research the options for psychiatric service dogs who are trained to specialize in anxiety. She found that they were expensive with limited funding options and long wait lists.

Right now, in Alberta there is a two-year wait list for service dogs, partly due to the legislation that requires that dogs be trained by the Assistance Dogs International (ADI) organization.

Sharon said that her daughter could not wait the two years for a dog. This year Rachel has already missed 50 days of school due to her anxiety, which has caused her to fall behind in her classes. Even when she is at school, her anxiety stops her from being present and focusing on her the learning material. Because of her difficulties connecting with her peers, Rachel is isolated and struggles with depression.

“This has become so debilitating for her that this is the last thing that we can think of to turn this around. This is not going away and she needs something in her toolbox that is going to help her get through the next few years,” Sharon said.

Due to provincial regulations, Rachel did not qualify for any government funding and Sharon realized to get her the help she needed they would have to pay the $25,000 for a dog.

They are currently trying to raise the funds publicly to pay for a dog for Rachel.

Sharon has already filled out the proper paperwork and paid a deposit for the dog but the family still needs to raise the rest of the money.

Rachel picked out a black Labradoodle that she has named Malachi, who will arrive in eight months from Manitoba after he is fully trained. Once Malachi arrives, he will go everywhere with her. He will be able to sense when she is feeling anxious and help to soothe her.

Since picking out Malachi, Sharon says they have already seen an improvement in Rachel because she has hope that things can get better.

The Browns are asking any businesses or service groups in the St. Albert area to sponsor Rachel. They have started a Gofundme page where they are collecting donations and are holding a garage sale to raise money.