Schools cancel activities due to COVID-19 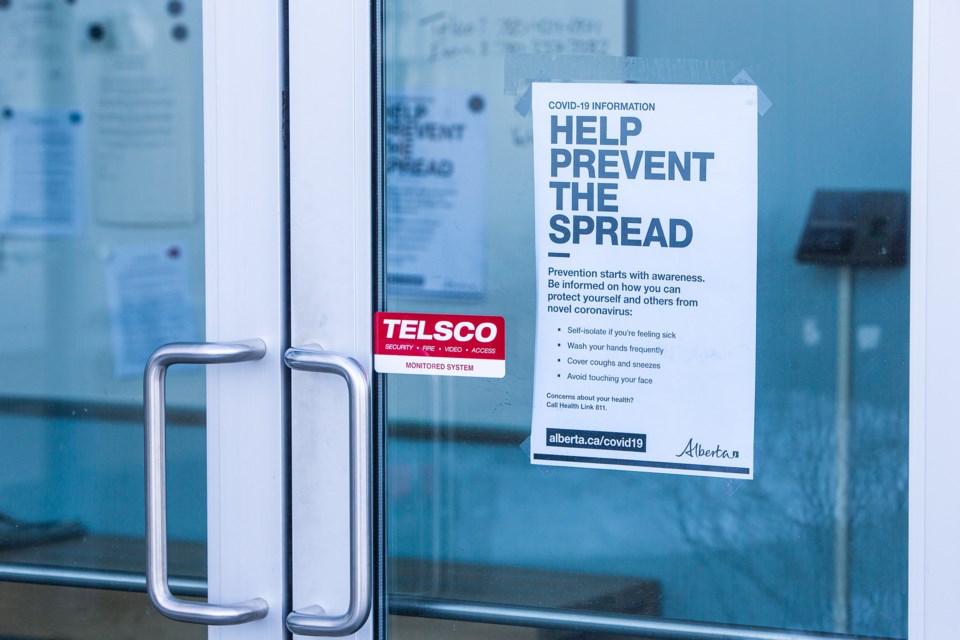 Anyone wanting to find out more about preventing the spread of COVID-19 can go online to www.alberta.ca/covid19 for information. CHRIS COLBOURNE/St. Albert Gazette

All junior and senior high sports meets in St. Albert have been cancelled or postponed due to the COVID-19 virus, and many other after school activities are now in doubt.

The provincial government asked organizers to cancel any events that have more than 250 attendees on March 13, including sporting events, conferences, and community events as part of its continued efforts to stop the spread of the disease known as COVID-19. Schools and daycares were also asked to make sure that no more than 250 people would be in the same room at the same time.

“If this carries on for any length of time, it probably means the season is over,” she said.

Sumners said St. Albert Public is cancelling all gatherings of over 250 people, which so far includes parent-teacher interviews and most field trips. All future gatherings would be evaluated on a case-by-case basis. Parents should contact their local schools to confirm if any events are still taking place.

“I know it’s hard on our kids,” Sumners said.

“At this point, it’s more about trying to keep everyone safe.”

In a letter to parents sent March 12, Greater St. Albert Catholic Schools said it would be cancelling all large public gatherings on the advice of Alberta Health Services, including parent-teacher interviews, open houses, field trips and tournaments.

Sturgeon Public said in a notice to parents March 13 that it had cancelled all after-school practices and activities based at schools and in the community until further notice, and would reschedule the parent-teacher interviews that had been scheduled for March 16 to 18. All school field trips were also cancelled until further notice.

While the province has yet to order any schools to close, Sumners said officials had noted such closures in B.C. and Ontario and were working on a plan for next week on how students would be affected.

“We do have families who are making the choice to take their children out of school, and that’s their choice, but right now we feel our schools are in a fairly good state to serve the community.”

Sumners said that there were no confirmed cases of COVID-19 in St. Albert as of Thursday. Two Leo Nickerson and Sir George Simpson students may have been exposed to it, but have since been confirmed to not have it. St. Albert Public has also mobilized extra clean-up crews in case they have to disinfect rooms.

Parents should watch the GSACRD, St. Albert Public and Sturgeon Public websites for updates on the COVID-19 situation.

Some Sir George Simpson scientists will have to keep their projects on ice this weekend now that a regional science fair has been cancelled due to COVID-19.

The Edmonton Regional Science Fair Council announced Thursday night that the 2020 Edmonton science fair would not be held March 14 and 15 as planned due to the COVID-19 situation in Alberta.

The science fair would have drawn about 300 parents and students together in one place, so organizers have suspended the event to follow Alberta Health Service’s advice, said science fair chair Amanda Joblinski.

“To my knowledge, we’ve never had to cancel before.”

Joblinski said about four Sir George Simpson students were scheduled to participate in the fair.

Student Hailey de Wit said she had planned to check out other projects and present her research on which forms of renewable energy were most reliable.

“I wish we could have done it, but things happen.”

Organizers aren’t yet sure what will happen next, as it would depend on how long the province’s directive remains in place, Joblinski said. They might cancel the fair, postpone it, hold it online, or do it as more of a showcase. Much will also depend on what happens to the Canada-Wide Science Fair, which had been scheduled to happen this May in Edmonton.

Joblinski said students and parents should stay tuned for future announcements, and to hold onto their projects; even if this year’s fair is cancelled, they can still enter their projects next year.