In a rare move, city councillors have approved a development permit for a storage facility on the north corner of Bellerose Drive and Inglewood Drive . Council does not typically handle development permits.
0
Jul 7, 2018 12:09 AM By: April Hudson 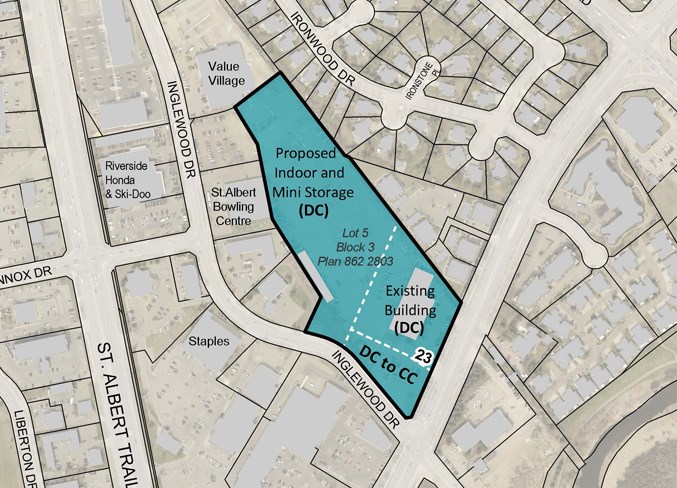 SELF-STORAGE – Houle Properties Inc. received approval from city council Tuesday to build a storage facility at 23 Bellerose Drive. Their hope is to subdivide the property into three parcels.

In a rare move, city councillors have approved a development permit for a storage facility on the north corner of Bellerose Drive and Inglewood Drive.

Council does not typically handle development permits. This was a special case, though, because the lot in question is one of the few left in the city zoned as direct control.

That zoning means councillors have to sign off on any development and can impose conditions.

23 Bellerose Drive is an oddly shaped lot 10.41 acres in size. Houle Properties Inc. wants to subdivide it into three parcels, a decision that will be made by the city's planning director.

Ben Battjes, the applicant, touted the development – Inglewood Self Storage – as a low-noise and low-traffic development that would be clean, secure and use the entire parcel.

"The site is awkwardly shaped ... self-storage really lends itself well to a site like this because you can configure the buildings to fit with the angles you're dealt," he said.

"We want to make use of a challenging piece of land ... that sort of (sat) vacant or underutilized for decades."

Before voting in favour of the development permit, Mayor Cathy Heron said her hope is the development will provide a good transition between commercial and a nearby residential subdivision.

"This is the best use," she said of the site plan.

Councillors voted to rezone 1.09 acres of the property from direct control to corridor commercial, with the rest of the site remaining direct control.

Battjes said the developer hasn't decided yet what the commercial area will be used for. However, the direct control portion will include a two-storey indoor storage facility and eight one-storey mini storage buildings.

Five of those will have small-to mid-sized storage units, while three will have larger units.

Resident Dave Gibson, who lives in the residential subdivision at the north end of the property in question, spoke during a public hearing on Tuesday to tell council his concerns about how the facility might impede his view.

Heron said she felt a storage facility would be a better view for nearby residents than the storage yard full of heavy equipment they've been looking at for years.

Chelsea Thompson, a development officer with the city, said there are only three or four direct control areas left in the city.

The idea of council having authority to approve a development gave pause for some councillors, including  Heron, who said she is looking forward to the day St. Albert does not have any more direct control zones.

"Really, we're not the authorities in planning – we shouldn't be making these decisions," she said.

Heron told the Gazette she also feels councillors, as elected officials, could potentially be influenced into approving a zoning or development permit that is not appropriate.

"Because we're elected, you can always influence," she said.

"I look forward to the end of it all."