Tara Seeger didn’t back down when a neighbour’s complaint about her front yard sign resulted in a bylaw order to remove it.
Jul 9, 2016 12:00 AM By: Scott Hayes 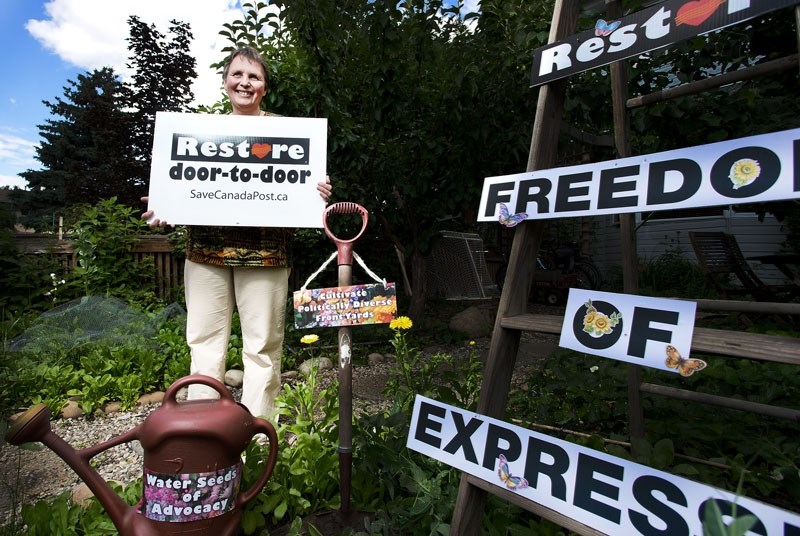 Tara Seeger didn’t back down when a neighbour’s complaint about her front yard sign resulted in a bylaw order to remove it. Instead, she has kept the ‘Save Canada Post’ sign and installed others with more poignant messages about democracy and human rights.

“That’s my answer to Nolan Crouse saying that… we don’t want signs. For me, they’re a gentle reminder of the values you find in the city of St. Albert.”

Signs are not strangers on the Grandin woman’s Cultivating Front Yards award-winning property. In the past, she has also offered her support for the CBC, just as her neighbour three doors down is doing with her own ‘We Vote CBC’ sign on her fence.

That sign has been in place for two years, the neighbour claims, and adds that she has not received any such complaint or notice to remove.

Not so for Seeger who was given until July 11 to remove her offending sign, an apparent contravention of St. Albert’s Land Use Bylaw regarding signs that advertise a third party business.

Seeger’s initial reaction to the notice was to write to Mayor Crouse to drive home the larger issues that she felt were more important. His voice message response clearly stated that the city would hold firm to the bylaw and to community standards.

“Certainly, the challenge with people putting signs up is it gets out of control. As soon as people start putting one sign up, then somebody else starts putting another sign up. So, what we've tried to do is keep our community clean and not controversial,” he said in the message.

“All I did was defend our staff’s letter,” he clarified in a phone interview with the Gazette yesterday. “I’ve got a responsibility to defend the bylaws that we have, whether I agree with them or don’t agree with them.”

According to her, Jean Ehlers, the city’s development manager, also upheld the bylaw, saying that “a sign is a sign is a sign,” something that she took to be another indication of the city’s hampering of freedoms of speech and expression. She sought advice from the Alberta Human Rights Commission on the matter and said that her contact there was “very concerned” with the situation.

Ehlers averred that these bylaws are complaint-driven and that the city has a duty to ensure that residents’ use and enjoyment of their property isn’t interfered with by another.

“We tried to find if there was any way in the bylaw that such a sign as this would be allowed in a front yard and we could not.”

He added that the bylaw enforcement process does allow for fines up to $10,000 but wouldn’t say what action would be taken if she failed to remove the sign. Further communications between them were still underway as of yesterday but Ehlers couldn’t comment on their substance.

When asked if she had any plans to remove the sign, Seeger laughed.

“The sign is going to stay in St. Albert, let me put it that way. I’ve got some things up my sleeve which are rather funny.”