Episode 6: Skaters, scooterers, and Heely shoe riders give thumbs up to new park

“It's just a blast. C’mon man, when the snow melts you just want to get out and skate."
Apr 24, 2021 8:00 AM By: Jennifer Henderson, Local Journalism Initiative reporter 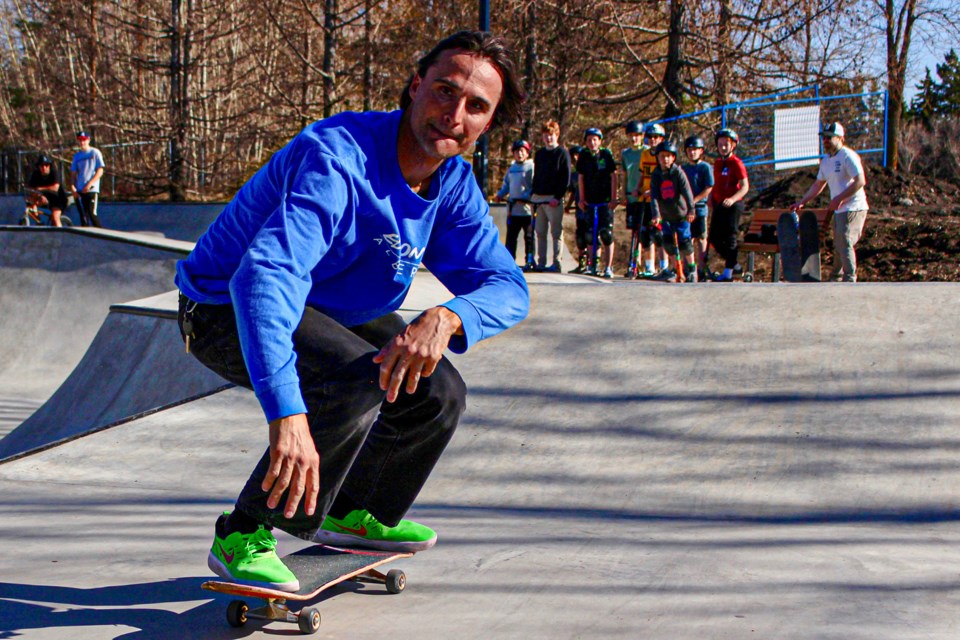 Winston Romanoff lands his signature move, the bunny hop, while a group of young scooter riders watch the expert at work. Romanoff, 41, loves sharing his passion for skating with the younger generation and is happy to help kids learn new tricks. JENNIFER HENDERSON/St. Albert Gazette

Lachlan Curtis was trying out the newly renovated Woodlands Skatepark – not on a skateboard, just with his shoes.

The nine-year-old stood out from the crowd of skaters and scooter riders because he was racing around the new park on his Heely shoes – shoes with a wheel built into the heel so walkers can zip around on their feet.

“Anywhere that has concrete, I can do it,” Curtis said.

Curtis, who was trying out the park for the first time before he stopped in to visit his Grandma, loved the park so much he hoped to come back after his visit with his grandparent.

“There are obstacles that you can try and some of them are really hard,” the nine-year-old said.

Curtis was surrounded by a sea of skateboarders and scooter riders, including Brendan Jordan, 15; Davis Maloney, 16; Dario Campagna, 15; and Phoenix Whitehouse, 16; who were all riding their skateboards in the park.

“It’s got some great features and (there is) something for everyone,” Maloney said.

The four teens said the concrete at the park is very smooth and great to ride but the park can be crowded with riders who are still trying to figure out how to stay out of other riders' way.

“The quarter pipes are sick. Everything is cool,” Whitehouse said.

Silas Kerbes and Mathieu Blouin, both 12 years old, were zipping around the park on their scooters.  The duo say the come out to the park every day they can, which Kerbes estimates is half of the days of the week and they spend at least three hours out riding.

Blouin said the renovated park is much nicer than the old park, even though there are way more riders crowding the space.

The 12-year-old said he likes the new park because he is a better rider after the renovation and he can do tricks, which makes his ride more fun.

Kerbes, who has been scootering for a year, said he can do more tricks on his scooter compared to his bike, which he also likes to ride. Blouin has been riding his scooter for eight months.

“There are a lot more tricks and I think it’s a lot easier to learn than skateboarding,” Blouin said

“I think I like it because you get to be out in the warm weather and you get to compete with your friends and I think that’s really fun.”

Standing out in the tsunami of teens and children, one man, 41-year-old Winston Romanoff, towered above the crowd.

Romanoff, also known as the "bunny man" because of his signature trick, the bunny hop, has been skateboarding much of his life, first starting in Toronto and making it out to California before finding himself at the St. Albert park.

With his decades of skating experience, Romanoff likes to help teach younger riders how to do tricks and get up the courage to drop into the bowl.

“I taught a kid how to drop in today and it feels great to just spread that knowledge,” Romanoff said.

Romanoff was also blown away by the skill at the kids at the park, stopping to point out the amazing moves of all the skateboarders and scooters who were riding and doing tricks.

“Ah man, this kid just grinded up the rail with his scooter and it's stuff like that will really blow my mind. I don’t really scooter but ... did you see that!” Romanoff said, pointing across the park. “It was amazing.”

Romanoff has stuck with skateboarding for so long because he said it’s a great stress reliever and it's great to get out and move his body.

“It's just a blast. C’mon man, when the snow melts you just want to get out and skate,” Romanoff said.