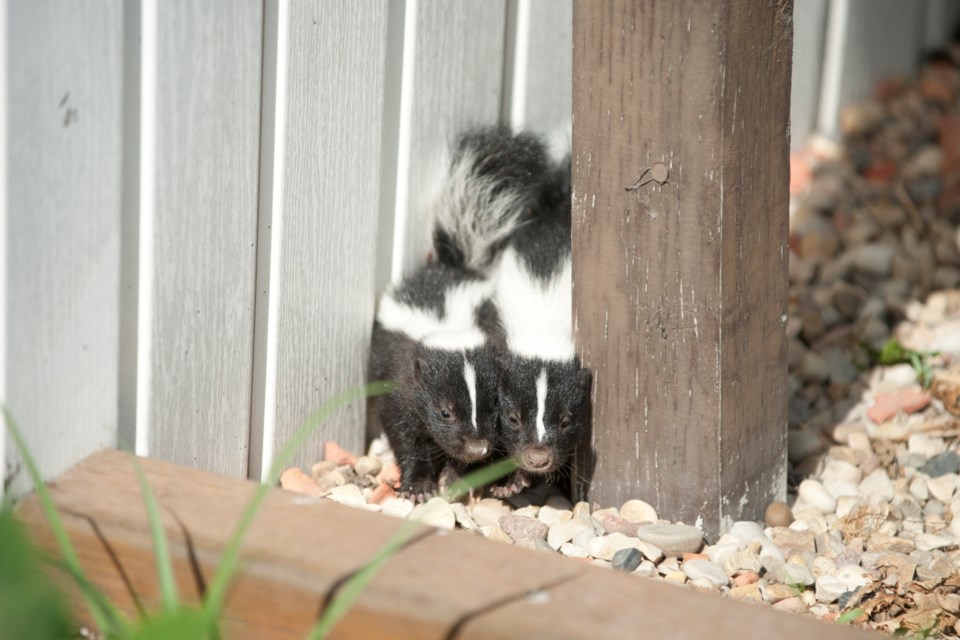 A pair of baby skunks comfort each other from the danger of an approaching photographer near St. Albert June 19, 2017. DAN RIEDLHUBER/St. Albert Gazette
Around July each year, many lawns and alleys around the province become unintentional maternity wards for perhaps the stinkiest of Alberta's mammals.

Charlene Piche from Cardiff – 15 minutes north of St. Albert – lives in a neighbourhood currently dealing with a large family of skunks.

“They sprayed my dog over the weekend; sprayed my neighbour's dog a few days ago,” Piche said.

Skunks may not be the best neighbours, but Robyn Cunningham-Dunlop with the Alberta Institute for Wildlife Conservation (AIWC) said residents should be cautious with efforts to shoo them away or move them to another area.

"Just be really cautious about what you do at this time of year regarding deterrence or relocation, because there's always the risk of unnecessarily orphaning the young ones," Cunningham-Dunlop explained.

Skunk babies are too young to care for themselves, she said. If they believe their mom has gone, they'll start wandering out in search of her and food.

“We actually thought they were really cute,” said Cardozo, “Had we not been in the car, we might have felt otherwise.”

Even a single bag of trash left on a porch momentarily can be enough to lure in some striped nocturnal guests.

St. Albert resident Tyler Eberle was recently cleaning his camper after a road trip and tossed a full garbage bag aside for the duration of an afternoon nap. He woke up to the sound of his garbage being thoroughly rummaged through.

“As I opened the door and stepped down, it ran from under the steps,” he explained. Eberle escaped back into his camper, only to hear the skunk resume his trash foraging minutes later.

“I was not opening that door again.”

Skunks can be more useful and less harmful to have around than one might assume. They'll eat anything from beetles and fruit to mice and eggs. They're also nomadic, so if you see a skunk on your lawn, it will more than likely roam elsewhere soon, and might even chase off or eat any mice that have been terrorizing your yard or garage.

Deterrents such as flood lights, weak ammonia solutions, peppermint oil or even an AM radio are typically more effective than relocation. Human voices nearby will eventually make them want to find a quieter, safer place to burrow too. But use these deterrents only in early June or late August, or you may end up with a yard full of confused baby skunks.

“If you're looking to do a relocation, we recommend that you wait until the end of August, because by then babies start dispersing on their own naturally," said Cunningham-Dunlop.

She added if you're not trained to handle skunks properly, it's best to call experts for advice beforehand.

Most rehab centres such as the AIWC don't have the capacity to relocate animals beyond the injured and orphaned ones they are already responsible for.

By late June of this year, WILDNorth had over 30 baby skunks in their care. Many of these skunks had been orphaned because people had trapped or chased away their mother.

It's better to coexist with skunks as much as possible, and use safe, harmless deterrents to avoid more skunks taking up residence where they weren't invited.

AIWC and WILDNorth work together semi-regularly to help injured and orphaned skunks around Alberta.

"If we have one baby that's all by itself, we check around to see if any of the other centres have a baby of the same age," said Stenhouse.

"Then we can pair up these little guys so they can have a family to grow up with."

According to Cunningham-Dunlop, AIWC receives about 40 to 50 skunks to take care of each year, but they are just one of the centres the eye-watering critters are sent to.