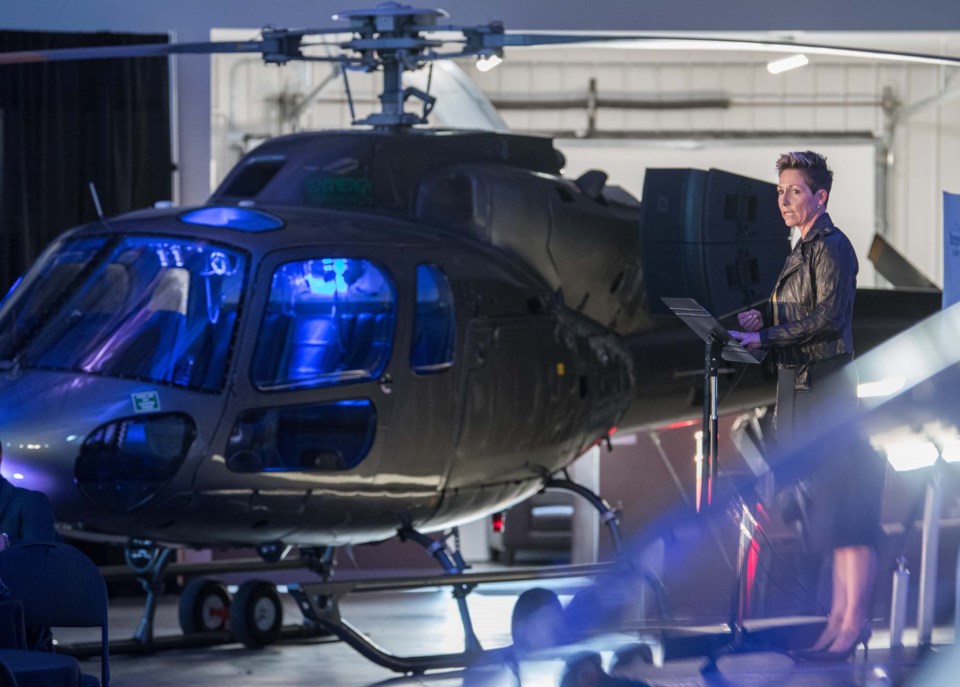 Sturgeon Mayor Alanna Hnatiw gives her annual State of the County address at the Synergy Aviation hangar at the Villeneuve Airport on Thursday Sept. 19, 2019. A portion of her talk was on the proposed Villeneuve Landing Network that aims to turn the airport into a regional economic engine. JOHN LUCAS/St. Albert Gazette

The sky’s the limit for Sturgeon County, but area leaders say they want to hear more before signing onto Mayor Alanna Hnatiw’s flight plans for the Villeneuve Airport.

About 120 dignitaries were at the Synergy Aviation hangar at Villeneuve Airport Sept. 19 for the State of the County address by Hnatiw.

Flanked by helicopters, Hnatiw outlined her vision for the county’s economic future in an extended metaphor that likened governance to flying a plane.

“In Sturgeon County, we have a clear flight plan for economic growth,” she said.

Hnatiw said the county has a skilled workforce and plenty of land for farms and industry, and offers excellent opportunities for hemp, pulse, plastics and aerospace development. In the last year, it also drew major investments such as the $4.5-billion Pembina Pipeline polypropylene plant and the roughly $40-million G3 Canada grain terminal.

Sturgeon County might be small, but it also has plenty of gravel, great soil and experienced farmers, and is right next to Edmonton’s post-secondary institutions and St. Albert, which is consistently cited as one of the best cities in Canada, Hnatiw said in an interview.

“I really do think the sky is the limit (for Sturgeon).”

But she also told the crowd of turbulence ahead. All levels of government have to streamline regulations and co-ordinate efforts to draw investment to this region. The county also faces big bills to maintain its roads and bridges at the same time that the MacKinnon Panel is calling for cuts to provincial capital spending. Regional partnerships such as through intermunicipal collaboration frameworks (of which the county has about 15 in progress) would be important to managing these challenges.

“Partnerships, collaboration and shared vision can all come together here at Villeneuve Airport,” Hnatiw said.

Hnatiw reiterated the call she made in July for regional partners to form a Villeneuve Landing Network to promote investment in the airport for regional benefit. The area’s roads, rails, runways and aerospace companies could build airplane parts, train pilots and mechanics, create jobs and harness the region’s many post-secondary institutions.

St. Albert Mayor Cathy Heron said Villeneuve Airport could be a good example of how shared investment for shared benefit could work in the Edmonton region. Still, joining this alliance would mean chipping in to the airport’s new water line, and St. Albert has to see what it would get from that investment.

“I’m assuming St. Albert will be a part of this,” she said of the alliance.

“We have to see the logistics, but we’re very committed to seeing the airport be successful.”

Parkland County Mayor Rod Shaigec said his council is due to discuss the airport alliance next month.

“We need to grow our economy and have access to international markets,” he said, and the airport could provide that for some industries.

But there are also a lot of questions that still needed answers, particularly when it comes to the costs of the airport’s infrastructure needs, he continued. Most air cargo currently goes through the Edmonton International, and he wants to know more about how Villeneuve fits into Edmonton Airport’s overall plans.

Morinville Mayor Barry Turner (who was not at last week’s address) said his council has yet to discuss Hnatiw’s proposal and doesn’t have many details on it.

“I think improving the airport is a worthwhile enterprise,” he said, and he hopes to discuss it more to see if Morinville could take part.

In an interview, Hnatiw said she plans to hold a regional meeting this October to see who wants to join the alliance and address the airport’s challenges, which includes a need for a new water line and better broadband.

“We need to see what we’re all bringing to the table and go forward from there.”