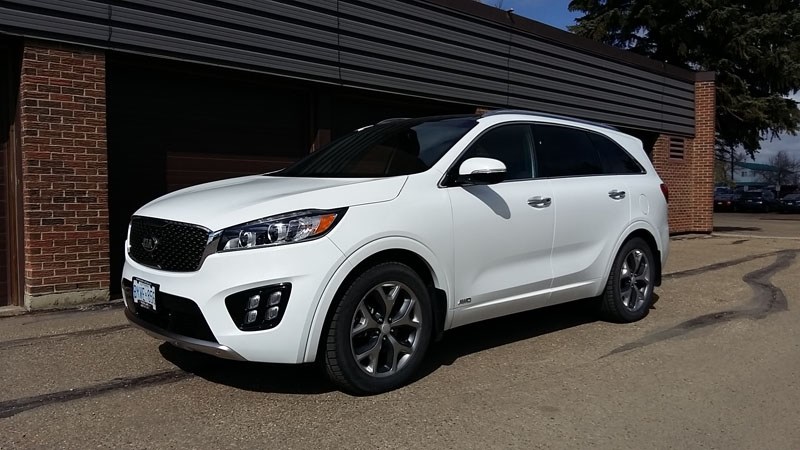 The Kia Sorento is a popular model for Kia selling in excess of 12,000 plus each year during the past three years. So far in model year 2017 Sorento is on track to do the same.

It s not hard to like this CUV, which was updated last year. It’s well designed, comes with a high level of content and is very user-friendly. I prefer understated styling and that’s just how the Sorento comes across. There are three models to choose from with two different powerplants. The base front-wheel-drive LX starts with a 185-horsepower, 2.4-litre four-cylinder; then, there’s the turbocharged 2.0-litre four-cylinder with 240 horsepower, offered in the LX, EX and SX models. But if you want smooth, quiet and effortless power, the 3.3-litre DOHC V6, putting out a strong 290 horses, is the one to pick. All engines are mated to a slick-shifting six-speed automatic transmission. Kia says with the V6 you can tow up to 5,000 lbs.

With the V6 engine acceleration is very good when you choose the Sport mode on the drive selector. Normal and Eco are your other choices. My fully loaded all-wheel-drive SX model with the V6 had fuel consumption range from 11L/100km to 9.5L/100km. The first figure included a drive to Calgary averaging 120 km/ph.

Whether on the highway or around town the Sorento rides and handles much better than the first and second generation models. This is as it should be since the latest model has a much stiffer body platform, longer wheelbase and a little more width. This also means a little more room inside. The Sorento steers well into curves with little lean thanks in part to stabilizer bars front and rear.

In the passenger cabin Kia designers do it right with the materials and controls complete and conveying luxury. The instrument panel is one of the best with all buttons and controls well laid out. No one should be frustrated in having to use the touchscreen as graphics are clear and easy to read. Plus, there are no sub menus. The front driver seat proved comfortable for my butt as my wife and I enjoyed a two and a half hour dash to Calgary. Top marks for the heated and ventilated front seats and the heated steering wheel as they all put out plenty of warmth. Heated second row seats are standard on the SX.

The SX and SX+ models offer three-row, seven-passenger seating standard where it is optional on lower trim levels. And yes, as with most midsize sport-utilities, the third seat should be a kid-only domain. Accessing the third row is a chore unless you have the flexibility of a gymnast. Leaving the third seat up takes away a lot of rear cargo capacity; a rather paltry 320 litres. Put the seatback down and you’ve gained a lot more space – 1,077 litres. Drop the second row seatback and cargo volume reaches 2,066 litres. The third row is a 50/50 split-folding seat, which can be flipped from the rear of the vehicle. Another great feature is the power liftgate. Simply stand at the rear with the key fob in your pocket and presto, the liftgate will rise!

Seems like a lot of money but it’s a bargain when you start looking at similar vehicles in the same price range. Also worth noting the Sorento has won awards being named Best New SUV/CUV ($35,000 to $60,000) last year by the Automobile Journalists Association of Canada. It was a Top Safety Pick by the U.S. Insurance Institute for Highway Safety this year. Which goes to show the Sorento is well engineered giving the consumer good value for the money.