Sportwagon raised suspension gives it a go on snow

It's good to know there are automakers like Volkswagen who still believe there is a market for wagons.
0
Jan 17, 2017 11:00 PM By: Garry Melnyk 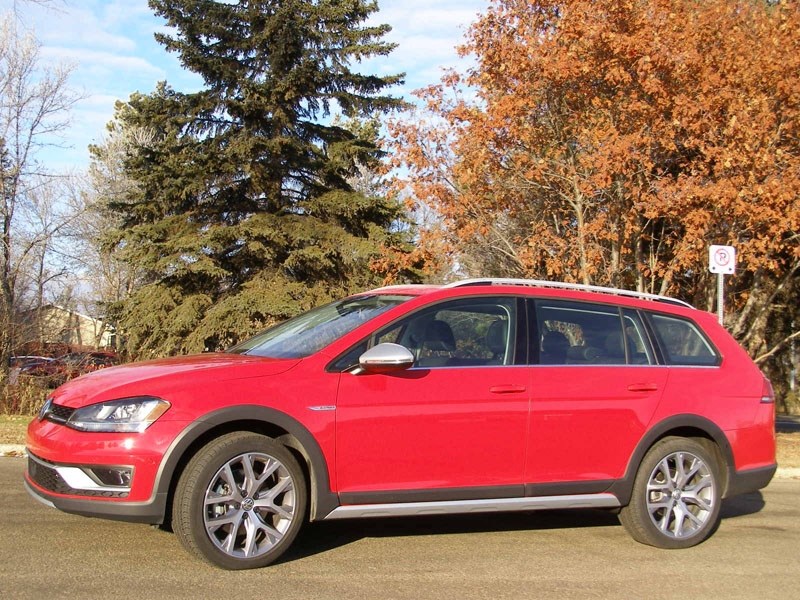 The Volkswagen Golf Alltrack is a peppy vehicle that can accelerate quickly.

It’s good to know there are automakers like Volkswagen who still believe there is a market for wagons. The Alltrack 4Motion, new for 2017, is Volkswagen’s attempt to lure away those of you who might be considering something similar from, say, Subaru.

Yes, this version of the Golf Sportwagen is a little different. With raised suspension and AWD the Alltrack is capable of tracking through deep snow or driving through off-road areas so you can camp, fish or hike somewhere far, far away. That said, this wagon is not suited for families with infants or small children, as the back seat offers minimal space for a baby seat or a toddler in a booster seat. The Alltrack is very much for young active, full of adventure adults or those adults who are not so young but still active (I’m in the latter category).

The Alltrack starts at $35,295 as it comes with exclusive trim, wheels and other features like the off-road suspension not found on the normal Golf Sportwagen. You can add on the Driver Assistance Package. For $1,310 it comes with Adaptive Cruise Control, Forward Collision Warning, Autonomous Emergency Braking, front and rear Park Distance Control, Lane Assist and Park Assist, which helps in both parallel and perpendicular parking. The Light and Sound Package is priced at $1,610 and gives you a Fender brand audio system with eight speakers and sub-woofer. Bi-Xenon adaptive headlights are also included. Personally I’d pass on both to keep the final sticker price well under $40,000. The Alltrack is one of two wagons offered by Volkswagen. The Golf Sportwagen starts at $23,145 with 4Motion all-wheel drive optional.

I’ve said it before and I’ll say it again, the driving experience, seating comfort and engineering of Volkswagen cars is not like a Japanese or North American vehicle. In the Alltrack, like VW’s other cars, when you settle into the driver’s seat you begin to feel like a part of the vehicle. Every part of the Alltrack has a feel or look of quality. The engine quietly does its job, the automatic transmission shifts smoothly and when used in manual mode clicks off each gear with precision. Instrumentation is well laid out before the driver, controls are logical and some are familiar, as they have been used in previous models. Nothing wrong with that – it means faithful Volkswagen owners feel right at home in their new VW. Workmanship is as always first rate. No need to slam the doors or the rear hatch, Volkswagen’s over-engineering means you close them firmly with little effort.

Power for the Alltrack comes from an equally reliable and proven 1.8 litre turbocharged and direct-injected four-cylinder putting out 170 horsepower and 185 lb-ft of Torque. The engine is mated to a six-speed dual-clutch automatic transmission. It’s a peppy powerplant and capable of brisk acceleration in an urban environment or the open road. Fuel consumption around the city with some high speed driving worked out to 11.3L/100km. I expected better, but then I wasn’t exactly driving with a light foot most of the time. Volkswagen rates the Alltrack at 10.6 L/100km and 8.0L/100km highway.

The new Alltrack is one of the best riding cars in its class. Smooth, quiet with the tires sticking to the pavement aided by the AWD, the suspension gives you the ride of a bigger car with the nimble handling of a smaller one. A quick run through Groat Road, at shall we say “higher than normal speed,” proved the little wagon has a sporting flavour in the twisties. In normal everyday driving the Alltrack was in FWD only mode which is a key feature of the 4Motion system. A computer monitored centre differential can change that, like when wheel spin occurs, the rear wheels engage and you simply carry on.

Overall a charming car to drive, but a different flavour from a small CUV or SUV. The Alltrack has plenty of cargo carrying capacity, but the engine is only 1.8 litres. Loaded with gear and more than two adults and it’s going to feel sluggish. Moreso perhaps driving in mountain areas. This is a minor trade-off for a value-packed wagon capable of getting you into the wilderness in complete comfort.