"Anyone who was super against it before is coming in now and saying, 'Okay, let's try this stuff,'" said Coleman Benton, Plantlife district manager.
0
Mar 26, 2020 2:00 PM By: Brittany Gervais 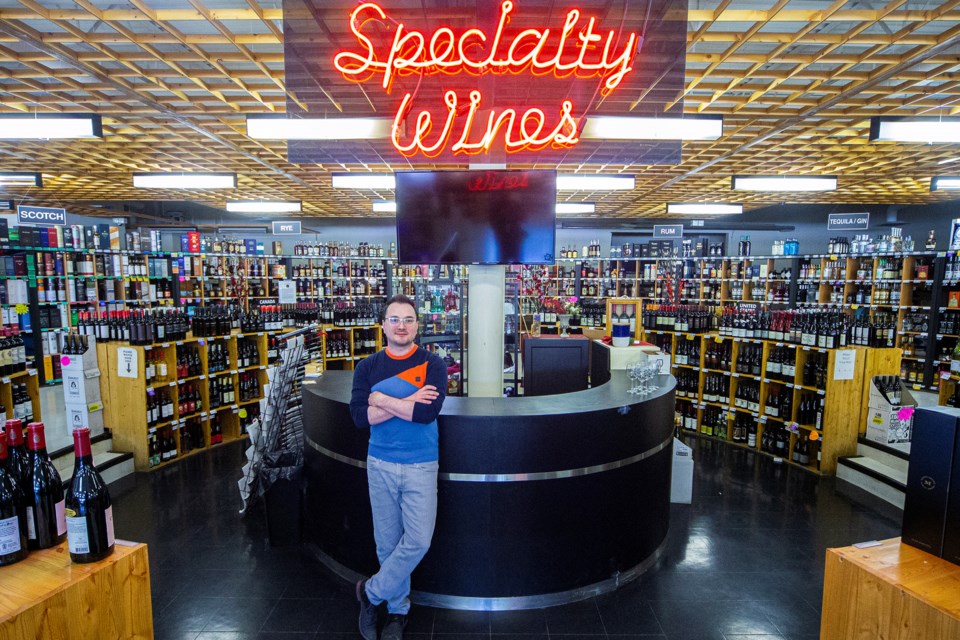 Dustin Drake, the manager of Campbell Liquor Store, says there has been a sharp rise in alcohol sales over the past two weeks as Albertans hunker down in the face of the COVID-19 pandemic. CHRIS COLBOURNE/St. Albert Gazette

As a state of public emergency continues in Alberta, cannabis and liquor stores in St. Albert have reported a spike in business over the last few weeks.

"For the first week and a half, it was busy, busy, busy, and now it's starting to quiet down," said Dustin Drake, Campbell Liquor store manager in St. Albert. "It's just people coming in and buying in bulk."

On Monday, both Quebec and Ontario announced the closure of all non-essential businesses in physical offices or stores as the number of cases of COVID-19 continue to rise.

Both provinces have identified liquor and cannabis as essential services, which differed from Prince Edward Island's approach to close them down.

According to the Alberta Gaming, Liquor and Cannabis (AGLC), all liquor and cannabis stores are still open in Alberta.

"AGLC supports cannabis and liquor licensees and their employees as they continue their business operations," reads an update posted to AGLC's website.

"AGLC encourages all retailers to follow the guidance of Alberta’s Chief Medical Officer of Health by adding extra cleaning and health protocols and continuing to monitor the situation as it evolves."

In the event liquor and cannabis stores are ordered to close by the province, public health officials are responsible for enforcing the closure, according to AGLC.  AGLC inspectors will be checking to make sure this is done, and non-compliance may result in an immediate suspension of the liquor license.

"We will continue to monitor the COVID-19 situation and make operational changes if and when there is different direction from Alberta’s Chief Medical Officer of Health."

Drake said the store has seen some customers clear out shelves over anxiety the store could close in the future. Ordering more stock in hasn't been a problem, he said, but the store will close if orders come down from the province.

"If the government says we have to shut down, then I think that's for a reason, and everyone should just stay home," he said.

Sargent Liquor Store on Boudreau Road also reported a slight bump in sales over the last few weeks. If ordered, store manager Paul Minhas said they will close the store. Delivery services are not available, though some customers have gotten alcohol delivered through taxi services in the city, he said.

On the cannabis side, one local business is seeing a number of new customers coming through the door.

Last week, customers were stocking up on cannabis, not with the same urgency as toilet paper sales, but enough to last them over a longer period of time, said a salesperson at Plantlife in Erin Ridge North.

There are plenty of new customers coming in with interest around lower THC options like edibles, she said.

"People who have never been into a pot store before are now so bored, I think they're just driving around looking for any business that is still open and wandering in here."

Coleman Benton, Plantlife district manager, said the sales spike is coming from people who are brand new to cannabis. With more people staying at home to prevent the spread of COVID-19, customers are looking for something to do, he said.

"There are bigger issues out there than the Devil's Lettuce. Anyone who was super against it before is coming in now and saying, 'Okay, let's try this stuff,'" Benton said.

The store is keeping up with sanitization measures and will close if directed by the province, Benton said. But with Ontario and Quebec keeping cannabis as an essential service, he said he's confident Alberta will do the same.

While it's not known when it will be safe for social-isolation measures to end, these new customers will be good for the cannabis industry, he said.

"It's good to get people familiar with it and okay with it, whoever may not have been in the first place," Benton said. "If we as an industry and as a business make it through this, it's paved a gold road."