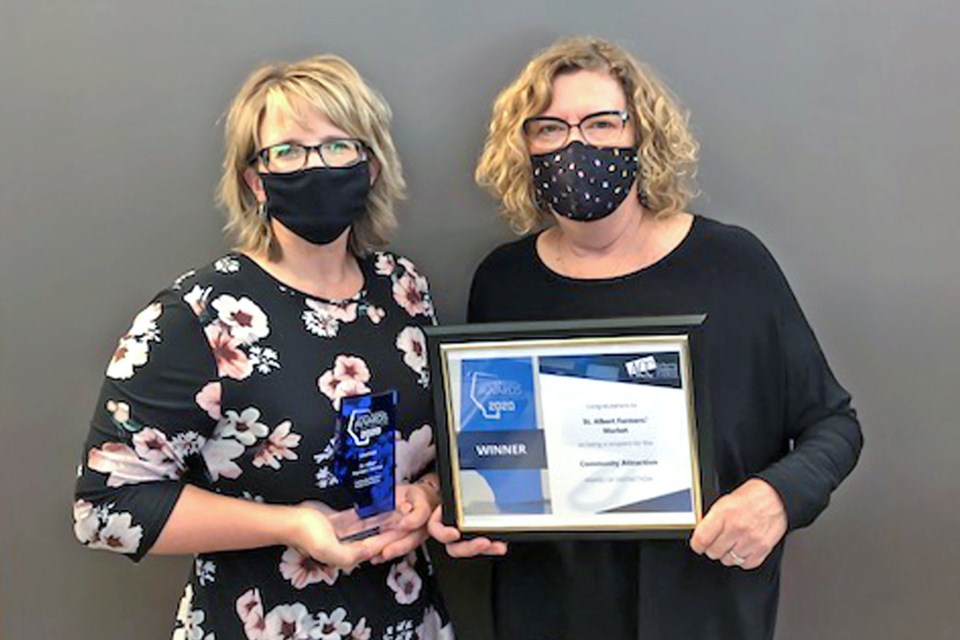 Even amid all the challenges faced this year with the COVID-19 pandemic, the St. Albert and District Chamber of Commerce got the recognition it deserves for creating a vibrant community farmers' market in St. Albert.

The St. Albert Farmers' Market took top honours in the community attraction category for the Alberta Business Awards of Distinction on Oct. 9. The award recognizes a business or organization that has an impact on the community by making it a more attractive place to work, live, visit and play.

Jennifer McCurdy, St. Albert Chamber president and CEO, said it's a "great honour" for the local farmers' market to be recognized at this level.

"We're really proud of the history and the reputation the market has. To be recognized in all of Alberta is a great honour," McCurdy said.

The St. Albert Farmers' Market is the largest outdoor farmers' market in Western Canada. In a normal year, the farmers' market attracts crowds of between 15,000 and 20,000 people each Saturday from June to October.

To keep shoppers safe amid the pandemic, the set-up for this year's farmers' market looked different. Usually, the event is held in the city's downtown, but it was moved to the Servus Place parking lot and split into two markets instead. The two markets contained about 170 stalls in total, down from the usual 270 vendors.

Directional signage had to be installed, all the vendors had to be set up and spaced out, a ticketing process was put in place for both markets and health checks were done with all the vendors beforehand, all while making sure everyone was wearing masks and abiding by public health rules. All of this was done with a team of two assistants and eight Saturday employees.

"Our team, our staff did an amazing job," McCurdy said. "It was different, but it was a good challenge. We met it and had a great year."

The record number of visitors seen this season was 7,000 people in each market. Out of a survey of 1,000 people, the Chamber found 56 per cent of respondents came from outside St. Albert to shop.

Pivoting the farmers' market to a set-up to abide by public health guidelines not only gave people a safe space to shop local, but also gave local producers a place to showcase their goods in difficult times, McCurdy said.

"Now more than ever, it's so important that we were able to provide a venue for our amazing local farmers, artisans and food producers to showcase their products, because they need the support now more than ever," she said.

The farmers' market's impact on the community stretched outside of market hours too.

Over the last four years, St. Albert Farmers' Market vendors donated more than 16,000 pounds of leftover produce to the St. Albert Food Bank, McCurdy said. The farmers' market uses fees from performing buskers to build out a scholarship fund for young artists who may not be able to afford music lessons, and local not-for-profits are given free space at the market to spread awareness about their cause.

"We really pride ourselves in the fact that we're more than just a market," McCurdy said.

McCurdy, who is retiring from the Chamber at the end of this year, said this award shows how much the farmers' market team has been able to accomplish together.

"This market has been in place for 38 years so we're just proud that we're still able to improve each year, grow it, and do new things. We're very fortunate."

In 2006, the Chamber received an Alberta Tourism Alto Award, which recognizes tourism innovators from across the province. In 2008, the Alberta Farmers' Market awarded the St. Albert market the Market Motivator Award. In 2017, the market received the Alto award again for Outstanding Sustainable Tourism.

Last year, the St. Albert market was recognized by Chatelaine magazine as one of the top 11 farmers' markets in Canada.