"They basically left with the shirts on their back at the time," said John Dardis, who worked as the incident commander the night of the fire.
May 15, 2021 3:00 PM By: Brittany Gervais 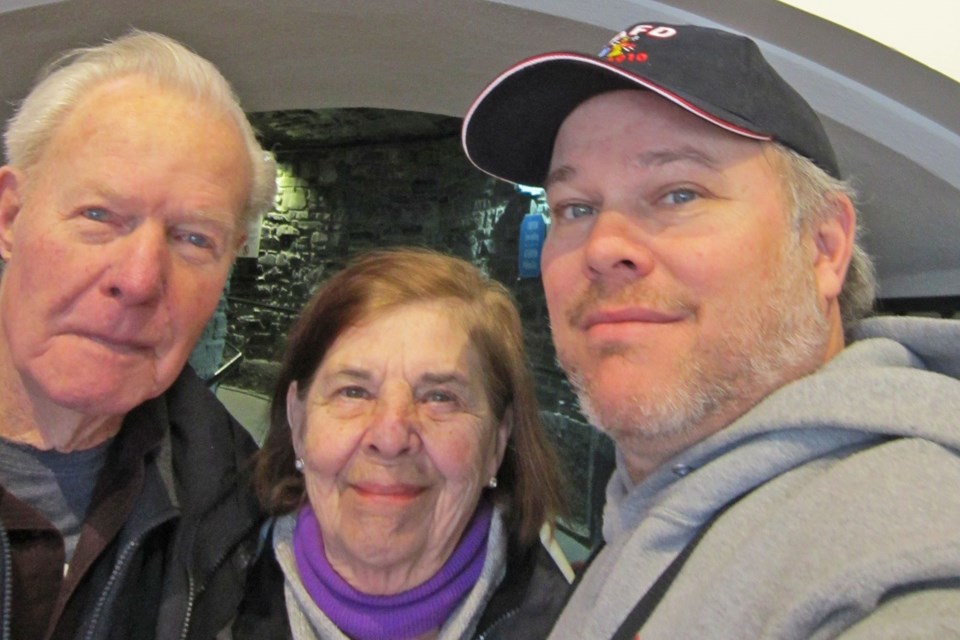 James Dardis (left), Joyce Dardis (centre), and their son John Dardis (right). John was incident commander in St. Albert's response to the Citadel fire last week, knowing the complex had been home to his parents at the time. SUPPLIED

When St. Albert firefighter John Dardis first heard the call come in for a structure fire on the evening of May 6, he said he recognized the address immediately.

"Fifteen Erin Ridge Road. I recognized it right away – that's my parents address," John said in an interview. When they arrived, he said the first crews on scene had knocked some of the fire down on the exterior of Citadel Mews West, but the fire had started to travel up into the attic.

John took the role of incident commander, meaning he was responsible for setting the foundation of both fire- and emergency-responder operations. Co-ordinating mutual aid, getting resources to the scene, fire control, and rescue efforts all fell under his control.

With immense responsibility, John said he knew he had to stay focused at the task at hand. He didn't have time to worry whether his parents were OK – for the first few hours, he just didn't know. His parents lived on the main floor on the back side of the building, right behind where the fire started.

"My parents are still of pretty sharp mind, and they're still physically quite mobile, so I was able to put that out of my mind, because I knew my parents can get out of the building on their own," he said. "I have so many other people and factors to deal with on the call, that I can't have my mind tied up on that. You need all your mental faculties."

What followed was an hours-long co-ordinated response to control the fire, evacuate residents, and make sure every evacuee had a place to stay for the night. Roughly 110 residents were displaced, with 42 being designated supportive-living residents, and around 67 who lived independently. Next door in the Citadel Care Centre, another 129 long-term care residents were temporarily displaced. The fire was extinguished early the next morning, May 7, with crews staying on scene to take care of any remaining hot spots. John himself stayed on scene until about 8 a.m. No one died, and three people were taken to hospital.

With almost 30 years' experience, John has seen his fair share of big fires, including the wildfires in Slave Lake and Fort McMurray. This one at the Citadel was "the perfect storm," he said. The size of the building, the high winds, and common attic space all made for a challenging response.

"Unfortunately there are sprinklers inside, but the attic space didn't have sprinklers. Once the fire gets up into an attic space, it's very hard to stop it."

Two hours into their response, John looked over his left shoulder. He saw his mom, Joyce, standing on the sidewalk behind the command vehicle, and he knew she was safe.

"It's funny to think that my mom is worrying about me dealing with this call, while I'm worrying about her. She didn't know that I had seen her, so eventually she walked up to the window of the command vehicle just so I could see her face."

John said he does want to discourage people from running into burning buildings to help with rescue efforts, but he is thankful to people who helped evacuate residents that night. A lot of the seniors have mobility challenges, and needed help getting down the stairs and out of the building.

He said he is extremely thankful for the RCMP, Alberta Health Services, mutual aid departments from Edmonton, Strathcona County, Morinville, and Spruce Grove, and the Salvation Army for their co-ordinated efforts that night.

"We have an awesome crew, but we would never do it without all the other outside help. Even from our own department, I couldn't believe the number of familiar faces that were showing up on call-ins to help out with the fire."

Now safely out of the building, John's parents are staying with his brother in town while they recover. Joyce told John they heard the alarms go off at the Citadel, and when they walked out their front door, they saw a huge plume of smoke billowing over their heads.

"They basically left with the shirts on their backs at the time," he said. His parents are processing what happened, and are emotional over losing their home and belongings. Right now, the family is trying to find a new place for Joyce and his father James to live.

John put a call out through the St. Albert fire department asking St. Albertans if they had any available suites or options his parents could look at. So far they've had a couple leads, but nothing has been decided yet.

"It would be different if they were living in a hotel, but we have time. We want to find the right place for them."

The Citadel Mews West fire represents a loss of more than 100 units of senior housing in St. Albert, adding to an already significant housing need in the city.

The average wait time for seniors to get an affordable housing spot in St. Albert through Homeland Housing is six years, the organization's CEO Raymond Cormie told a city committee in February. At the time, there were 144 seniors on the waiting list in the city to get into housing that offers various levels of care and prices.

During a media availability on May 7, Mayor Cathy Heron recognized the need for seniors housing in St. Albert. The city is continuing discussions with a developer for an affordable housing project on some lands downtown, and the city remains an active part of Homeland Housing.

"There's always going to be a need, and council is very focused on getting that need met," Heron said.