Goaltender grieves the loss of his former teammates

Shortly after learning about Humboldt bus crash a St. Albert netminder was making plans to get to Saskatchewan to support his former teammates.
Apr 13, 2018 2:30 PM By: Jennifer Henderson, Local Journalism Initiative reporter 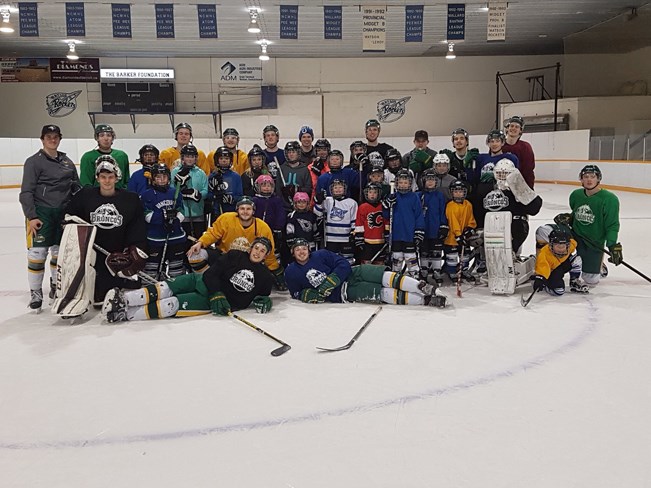 Sam-Jaxon Visscher, the goalie on the right, poses with his former Humboldt Bronco teammates during a trip to nearby Watson for a community skate. Visscher was with the Broncos from August 2017 to January 2018.

Shortly after learning about Humboldt bus crash a St. Albert netminder was making plans to get to Saskatchewan to support his former teammates.

Sam-Jaxon Visscher was a member of the Humboldt Broncos this season until January, when he was traded to the Olds Grizzlys.

Visscher was home alone on a Friday night checking his twitter feed when he first learned about the accident. He saw the playoff game between the Broncos and Nipawin Hawks had been cancelled and soon learned his former team had been involved in a tragic accident. He spent the rest of his night following the news with his mom.

Visscher said that he was in Saskatchewan by Sunday night for a vigil and spent Monday and Tuesday visiting his friends and the families of the Broncos.

Visscher said that he has talked to all the surviving Broncos and the environment "was surprisingly pretty positive."

“The guys were in high spirits and a couple of guys were joking around. A bunch of them were up and moving,” Visscher said. “It meant a lot to see guys were making progress.”

The 19-year-old said that he is still in shock and disbelief over the whole incident. Visccher  added that seeing how strong the team is has really helped lift his spirits.

“They were fighting. They were all being warriors. There is pain there but they’re tough guys and they’re battling really hard,” Visscher said.

The goaltender said that this tragedy has impacted communities across the country and that it is so powerful to see the worldwide support for the Broncos.

“It’s not just one place that has lost so much. It’s the community. It's everyone that has laced up skates,” Visscher said. ‘To see people from all over the place to love and come together and support, it’s moving.”

Visscher, who has returned to St. Albert,  is planning on attending as many vigils and funeral services as he can to support his team.

“I just want the boys to know that I’m there and that I’m thinking about them and praying for them,” Visscher said. “I really struggled for a long time thinking about what I could do to help and this is one of those ways.”

Visscher said the Broncos were a very close-knit group of men who would always find the time to spend together. Although he didn't know the three St. Albert players – Logan Hunter, Jaxon Joseph and Stephen Wack – very well before he got to Humboldt, once he was there they bonded over their shared hometown. Visscher said he will always remember the Broncos.

“They worked so hard and dreamed so big and they loved this game. We have to remember them for what amazing people they were too. They weren’t just hockey players. These were men and women and these guys are just so special.”