Mayor Cathy Heron focused on opportunities ahead in her State of the City address
Nov 21, 2020 8:00 AM By: Brittany Gervais 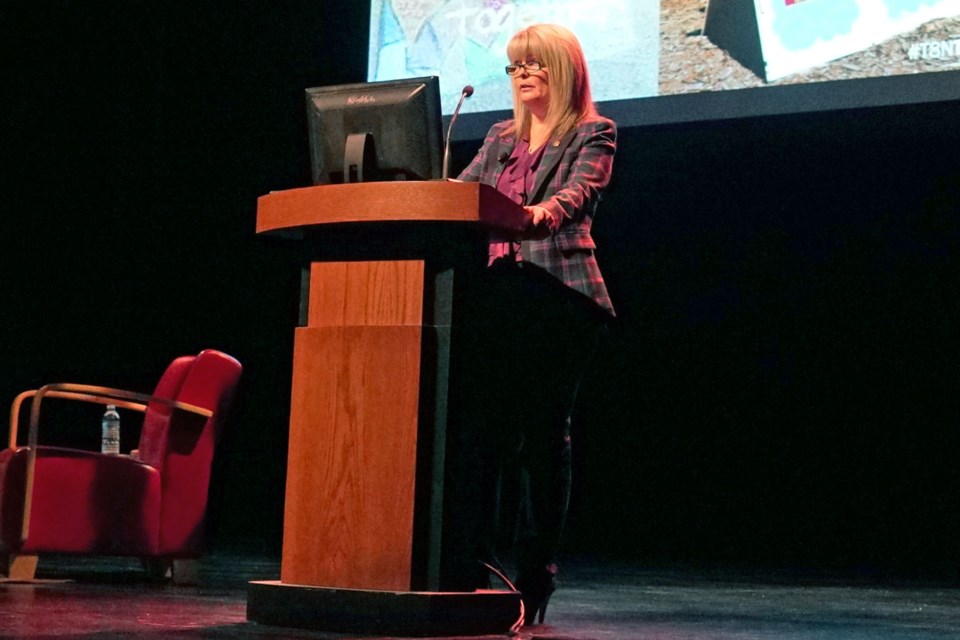 St. Albert Mayor Cathy Heron made her annual State of the City Address at the Arden Theatre to a handful of people and those watching the live-stream on Wednesday morning. BRITTANY GERVAIS/St. Albert Gazette

Like any wound, the city’s recovery from COVID-19 will take longer to realize than the injury itself, says St. Albert Mayor Cathy Heron.

How the city could better position itself for economic recovery in the future was a key focus of Heron’s State of the City address this past week, as she recognized the hardships during the last year with the pandemic, but also how strategic prioritization of projects could drum up new revenue streams and investment for the city. With COVID-19, this year's address was live-streamed online while about a dozen people listened inside the Arden Theatre on Nov. 18.

"From municipal cash flows to responsible growth, to business development – whatever the problem, 2021 will be the year we find solutions, because we're all ready to think differently," Heron said. "In challenging times, one must question the accepted reality, because things are going wrong, rapid answers are needed, and the solution may well be found outside the usual compass."

While the COVID-19 pandemic has been the “hardest time St. Albert has ever faced in recent decades,” cutbacks on city spending and efficiencies wiped out a projected $14.4-million deficit to $500,000, meaning the city won't have to rely on double-digit tax increases or depleting reserves to make up for it, Heron said. Those actions ensured St. Albert "enters a new fiscal year on a solid financial footing," she said, but that doesn't mean the path to recovery will be a short one.

Heron pointed to lessons learned from the 2008 financial crisis that can be useful to ensure the city is better prepared for the future. St. Albert will be going into the recovery phase with less debt and uncertainty than other communities, making the city "more appealing for business investment and (giving) us opportunities to capitalize on new innovations that will come out in the global realignment," she said.

The city's revised municipal development plan (MDP), which is going through final revisions, will lay out St. Albert's path to accommodate a population growth to 100,000 and up to 13,000 new jobs over the next few decades. The new MDP allows for a low-carbon form of development, which will open up St. Albert to stimulus dollars focused on green recovery in the future, Heron said.

The city's recently signed annexation agreement with Sturgeon County should give St. Albert a place to grow its industrial and commercial tax base. If approved by the province, the deal would transfer about 1,500 hectares of land to St. Albert, giving the city 45 years of growing room.

Attracting new revenue streams and economic activity to St. Albert will help the city move towards a new goal of achieving a tax assessment split of 70 per cent residential and 30 per cent non-residential in 25 years, Heron said, which should help keep taxes low for residents. An 80-20 split was realized this year, she said.

Getting the Lakeview Business District off the ground will be another important step for the city to grow its tax base.

Of the $7.8 million in stimulus funds given to the city by the province last summer, $5 million will be put towards the servicing of Range Road 260, the lands on the west side of Ray Gibbon Drive that have been designated as the site of a future recreation centre. This servicing project will also help foster economic growth within the Lakeview Business District, which is expected to provide more than 300 permanent full-time jobs, Heron said.

"The next phase of St. Albert success is upon us," she said. "By expanding our industrial base with responsible manufacturing and warehousing, we have opportunities to become key sites for the knowledge base sector, for artificial intelligence, for recycling, for the hydrogen economy, for the plastics industry, and of course, value-added agriculture."

A combined area structure plan (ASP) for Lakeview and the Badger Lands represents a noteworthy step for St. Albert next year. Along with St. Albert's next business park, the city is currently studying plans for a solar farm in the Badger Lands, which is expected to generate $29 million in revenues over 25 years should the city decide to invest about $30 million into the project.

At the moment, the city’s debt is around $47.8 million, and there's only so much debt the city can take on under provincial law, Heron said. So, should the city take on $30 million for a "revenue generation project," or invest in a recreation centre in the city's northwest?

"I think we'll probably go with the solar panels. I think that's a good use of a piece of land in St. Albert, and we're still really actively pursuing the waste-to-energy conversations," Heron said during the question period.

Industrial development requires a good transportation network as well, Heron said. Investments in infrastructure projects like twinning Ray Gibbon Drive and widening St. Albert Trail North will increase the capacity of city roadways and make St. Albert more attractive for future business. And earlier this year, St. Albert joined 12 other municipalities in the Edmonton region to create a single, integrated regional transit system, which is set to hit the road in 2022.

The city saw signs of investment confidence this year when packaging company Uline announced a 600,000 sq. ft. distribution facility in the Anthony Henday Business Park in March. Expected to open in 2021, Uline will not only have the biggest commercial footprint in St. Albert, Heron said, but the company will be the single biggest taxpayer and one of the biggest employers in St. Albert.