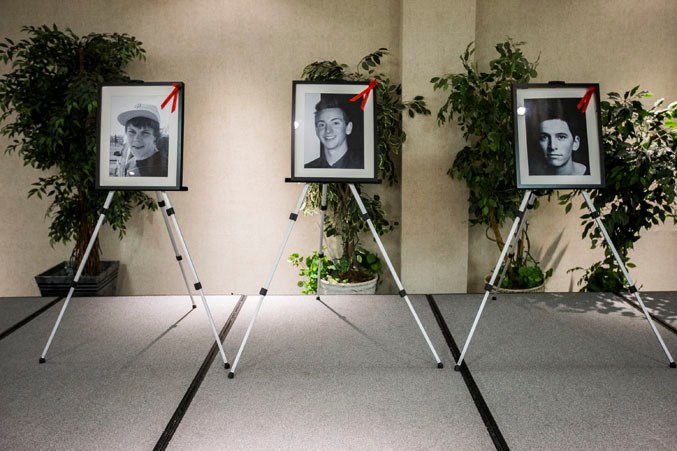 On November 26, 2011 Bradley Arsenault, 18, along with Kole Novak, 18, and Thaddeus Lake, 22, were killed in Beaumont by impaired driver Jonathan Pratt. Pratt’s vehicle crashed into Arsenault’s vehicle at more than 200 km/h. At the time, Pratt was more than two times over the limit.

St. Albert MP Michael Cooper has launched a petition to help toughen the federals laws around impaired driving. Cooper held a press conference to launch the petition on Sunday along with Sheri Arsenault, a Beaumont mother who lost her 18-year-old son Bradley to an impaired driver in 2011. The duo is advocating for tougher penalties for impaired driving and want “meaningful” mandatory minimum sentences for those charged with impaired driving causing death. Arsenault said that she wants accountability for those who take a life when driving while impaired. "When a young, innocent life is taken, it's very hard for anyone to fully recover from that,” Arsenault said. Right now the mandatory minimum sentence for the first offence of impaired driving causing death is a fine of $1,000. The man who was convicted in the death of Arsenault’s son and the two other young men in the car at the time was given eight years in prison in 2014 and a lifetime driving prohibition. He became eligible for parole earlier this year. Cooper started the petition to try to introduce amendments around impaired driving laws in Bill C-46, which is a large bill that will alter many aspects of the Criminal Code. In June 2015 then-Justice Minister Peter MacKay introduced legislation that would amend the Criminal Code to toughen up the mandatory minimum sentences. The proposed legislation would have put those convicted in prison for six years. The bill was tabled in the summer and the Conservatives went on to lose the election in the fall before the proposed legislation could pass. Since then the Liberal government introduced C-46 to make their own amendments to the impaired driving laws in the Criminal Code. The new legislation introduces longer maximum sentences and higher fines for minimum sentences but does not impose any mandatory minimum jail time. Cooper said he does not care specifically what the minimum sentence imposed should be, but wants it to be something substantial to help those who have lost loved ones get a sense of justice. “Whether it does have a deterrent effect or not, the fact is that this is about justice. This is about justice for the victims and their families,” Cooper said. The bill is on the way to the Senate for review and Cooper is hopeful amendments will be made before the bill passes final reading.