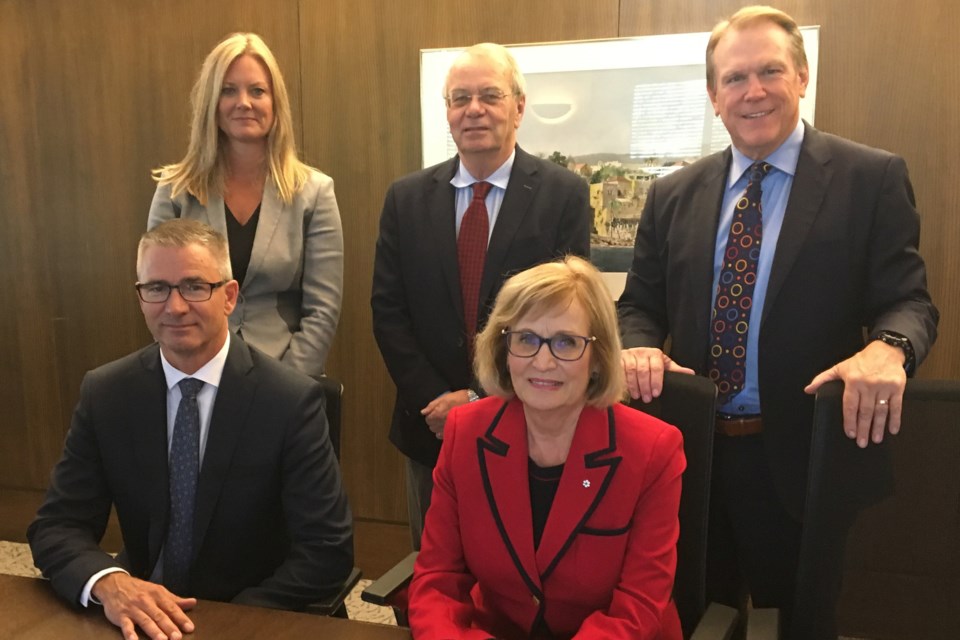 St. Albert is in for a “tough” budget season, after the provincial government’s blue-ribbon panel came out with a report Tuesday suggesting municipalities should shoulder more costs associated with capital projects.

Alberta’s UCP government commissioned the report, headed by former Saskatchewan finance minister Janice MacKinnon, in May. It makes recommendations on how to balance the provincial budget by 2022/23.

There was tough – but not unexpected – news for municipalities under the capital spending section: that municipalities should share more in the costs of capital projects.

Mayor Cathy Heron said she was not surprised by the report’s findings and said the city was expecting recommendations around cutting funds for infrastructure.

“We need to all – the province as well as municipalities – just really, I hate the (term), but tighten our belts,” Heron said. “Just really watch where we’re spending money.”

Capital funding cuts have been top of mind for municipalities across the province, especially as the expiration of the provincial Municipal Sustainability Initiative in 2021-22 approaches, a major grant that municipalities rely on.

Alberta has not yet come up with an MSI replacement for municipalities outside the province’s two biggest cities, and last year the Alberta Urban Municipalities Association (AUMA) passed a resolution asking the government to index annual funding as a fixed percentage of provincial revenue.

The MacKinnon report found capital grants to municipalities are a quarter of provincial spending on capital, and dollars spent per person on municipal capital grants are 20 per cent higher than the national average.

It said the province “can’t afford to maintain existing levels of municipal capital support ... while municipalities have tax room and yet rely on increasing provincial grants.”

One major capital project the previous NDP government committed to sharing with St. Albert is the $54.2-million Ray Gibbon Drive twinning. Last month, the city approved borrowing up to $36.6 million for the project, and it would be five or six years before any provincial funding would be seen.

Heron said she is an optimistic person and the MacKinnon report does not shake her confidence the UCP government will honour the former government’s cost-sharing commitment.

Coun. Sheena Hughes said the province will be “downloading the problem to municipalities” if it follows recommendations in the MacKinnon report. She added municipal grants were not excessive to begin with.

“They could trim the fat as opposed to completely downloading the problem to municipalities as part of their solution,” she said.

Earlier this year, St. Albert city council looked at ways to deal with a 10-year growth capital plan it cannot afford, along with an approximate $16-million shortfall in its repair, maintenance and replacement budget that is generally covered by grants from other levels of government.

Council has slashed its capital plan by $128 million and instituted a short-term solution to deal with its RMR issues by approving a 1.5-per-cent tax increase for three years, beginning in 2020.

Heron said the city will be looking at its asset management plan and increasing the lifecycle of city assets, along with watching staffing levels. It is not as easy to simply slash items from the RMR budget, however, because it deals with upkeep of everything the city owns.

“Those kind of little incremental steps in our operating budget just makes a small dent in the bigger infrastructure capital side of our deficit,” she said. “We’re going to have to work with the province and partner.”

The city is also looking at opening up alternative revenue streams by exploring the creation of a municipal utility corporation. Council will review a business case for a utility corporation this fall. Administration has said this could include non-traditional utilities, such as waste-to-energy.

Coun. Ken MacKay said the impact of provincial cuts to capital spending on St. Albert will really be in the details, and council will be watching the provincial budget closely.

“There’s a whole bunch of unknowns. This is going to be a tough, tough budget year for us,” he said. “We’re going to have to make some really tough decision as it relates to our own spending.”