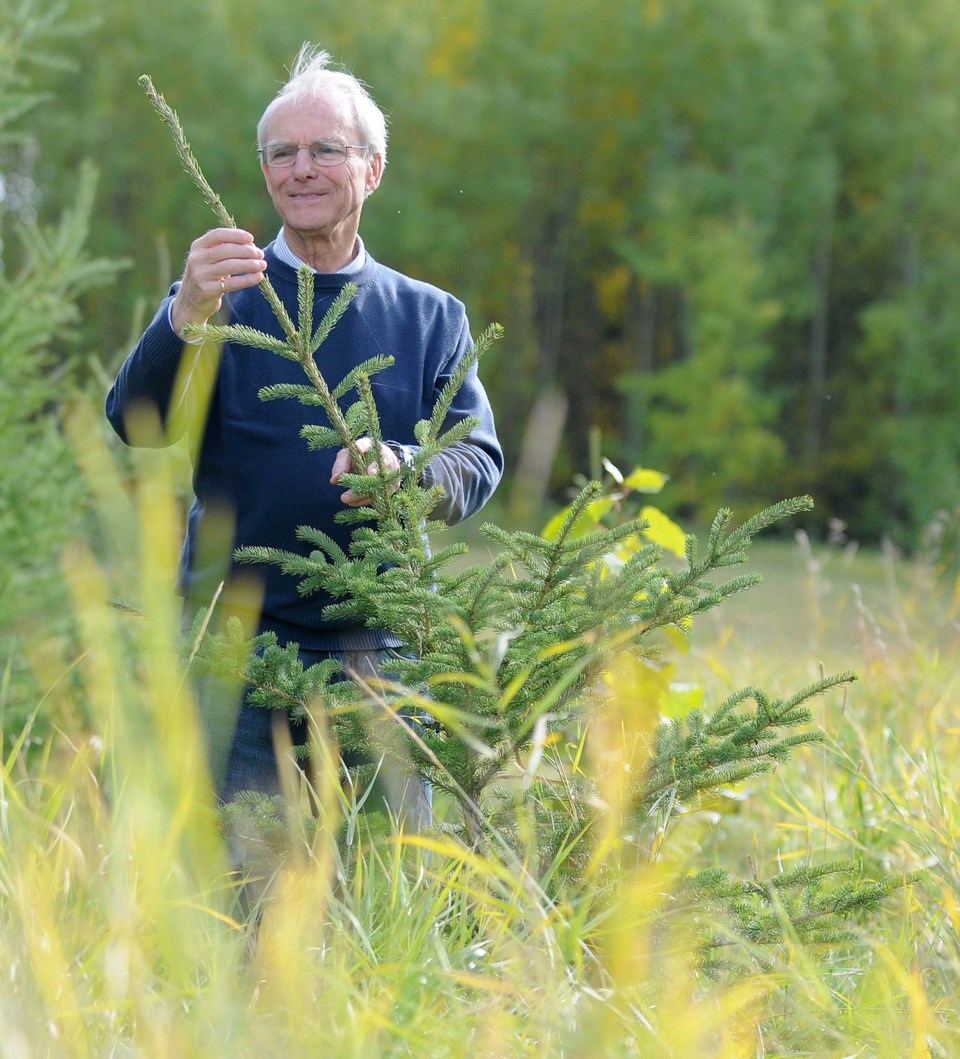 PETER MURPHY (1930-2020) – Retired forestry professor Peter Murphy was remembered by many this week for his decades of contributions to forestry in Alberta. His research and advocacy played a key role in the preservation of St. Albert's White Spruce Forest. LAURA PEDERSEN/St. Albert Gazette

Naturalists across St. Albert paid tribute this week to the legacy of one of the city’s most stalwart stewards of the White Spruce Forest.

Daughter Sharon Murphy said Murphy felt ill that day after coming home from tending trees in the Grey Nuns White Spruce Park (formerly the White Spruce Forest), as he had done almost every day for years.

“He was really passionate about forestry. He loved trees and loved the regeneration of trees,” she said.

“The reason he was so keen on building up the White Spruce Forest was to make it a legacy for people in St. Albert to enjoy.”

Murphy was renowned in St. Albert for his work with trees. His analysis of a 161-year-old tree from the White Spruce Park confirmed that the forest there predated the city by several decades. Former St. Albert mayor Nolan Crouse told the Gazette Murphy’s research and advocacy were pivotal in the city’s decision to protect the forest as a municipal historic resource in 2011.

Virtually every forester in Alberta and many across Canada knew Murphy, said St. Albert’s Bruce Mayer, Alberta’s assistant deputy minister of forestry. Mayer said he found it fitting that Murphy, who had written several books on the history of forestry, spent his last day working with trees.

“He personified forestry in Alberta, and literally wrote our history,” Mayer said.

Born in 1930, Murphy got into forestry in university because he heard it was a new industry, and fell in love with it after a stint on a B.C. timber crew, Sharon said.

Growing up, daughter Barbara Eberlein said Murphy would often take the family out on trips to the wilderness whilst wearing a smile and a cowboy hat, during which he would talk on and on about the nature and landscapes around them.

“We would all do an eye roll, because we knew we were in for another lecture,” Eberlein said, with a laugh.

“He always smelled like a pine tree,” Eberlein said.

Murphy became head of Alberta’s forest ranger program in 1956 and was the first director of the Hinton Training Centre when it opened in 1960. The centre continues to offer world-class wildfire management training today. Murphy also founded the popular Junior Forest Rangers program in 1965.

Mayer said Murphy joined the University of Alberta’s new forestry program in 1973 and served as the program’s chair from 1975 to his retirement in 1995. Murphy continued to give guest lectures at the U of A up until this year.

Murphy was a mentor to everyone, and could somehow fit a 150-slide presentation into a half-hour time slot, Mayer continued. Mayer said he would often record their conversations whenever they went on drives together so he wouldn’t miss a word of Murphy’s wisdom.

“Every time I was in Peter’s presence, I was always in a classroom,” Mayer said.

Murphy worked with the City of St. Albert from 2012 to 2014 to craft an official management plan for the White Spruce Park. He also spearheaded an ongoing program in 2013 to extend the life of the forest by planting thousands of white spruce seedlings in the park.

Daryl D’Amico, who co-chaired the city’s white spruce park working group with Murphy, said the man was “relentless” when it came to tending to those new seedlings, and was out at the forest at least two to three times a week. The two of them had been in the park as recently as Oct. 21 making plans for next year’s plantings.

When asked by the Gazette in 2010 why he had dedicated so much of his life to forestry, Murphy said it was due to their resiliency.

“It’s such an exhilarating sight to see a young stand with all those leaders (young trees) reaching for the sky,” he said.

Murphy is survived by his children Sharon, Shelagh, Thomas and Barb, seven grandchildren and five great-grandchildren. He was predeceased by his wife Joan and daughter Bridget.

Sharon said Murphy would be cremated and interred next to his wife in Edmonton. A celebration of his life would be held next year.

In lieu of flowers, the family asked that donations be made to the U of A’s Dr. Peter J. Murphy Award in Forestry.