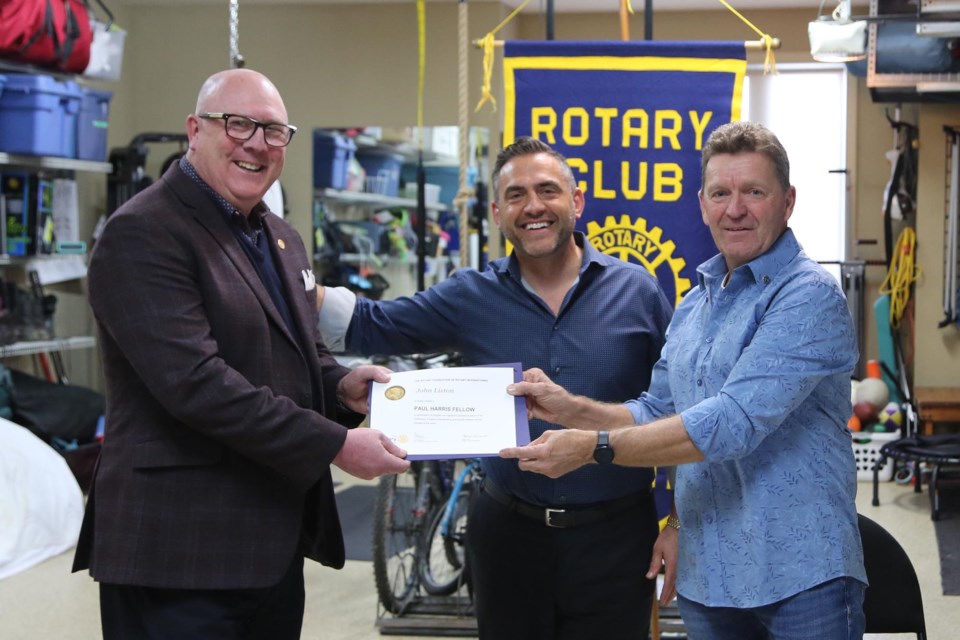 All are recipients of the prestigious Paul Harris Fellow award, one of the highest honours Rotary can bestow on a person. It recognizes a member's volunteer contributions that uphold the club’s highest ideal: “Service Above Self.”

The St. Albert Rotary Club presented Liston, president of the Alberta Enterprise Group (AEG), an organization that advocates for Alberta’s business sector, with the award on April 22.

“It’s quite humbling. You don’t do community work for recognition, and so when you get a phone call with someone saying, ‘We’re going to give you an award,’ you’re like, ‘Are you sure?’ There’s also an element of discomfort. You don’t do this kind of work for notoriety or for any kind of significance. You do it to belong to the community. We are only as strong as our weakest. So, if we can make stronger the people who are suffering, the stronger we can make the community,” Liston said.

Due to pandemic restrictions, the open-door presentation was held in fellow Rotarian James Kazoleas' garage with about a dozen family and friends in attendance. Liston's nominator, Robert Gallant, described him as a quiet man who prolifically helps St. Albert charities.

“He’s not one to boast, but the best compliment I can give him is he’s a humble man. He thinks of everyone else before he thinks of himself. And when John comes toward you, and he has that grin, you know he wants something. But he never asks for himself. Everything is to help somebody else,” said Gallant.

Liston’s list of volunteer activities is extensive. He was Board Chair of the Sport Central Association, a volunteer-driven organization that provides 10,000 children with sports equipment. In addition, he chaired the Mark Spector Golf Classic and cofounded the T8N100Men, a local non-profit group that has raised hundreds of thousands of dollars for charity.

He clearly remembers his first charity contribution at the age of six. It was the Miles for Millions Walk-a-thon designed to raise money to alleviate a poverty and hunger crisis in South Asia and Africa.

“My parents were incredible community contributors. They started the Miles for Millions Walk in Edmonton in the 60s with a fellow by the name of Grant MacEwan. And they raised money for Oxfam. I was raised around this. When I was six years old, I walked 25 miles in the Miles for Millions and we did it every year. Not only did we do Edmonton, we went to Banff and Calgary. I was raised in this culture. My parents led with that model and so it was always part of our lives from a very young age,” Liston said.

After graduating from St. Francis Xavier High School, he enrolled at the University of Alberta before switching to NAIT’s civil engineering technology program and graduated in 1984. That was the start of a long career before finally landing a role at AEG.

The Listons settled in St. Albert in 1995, a family-friendly city with everything needed for the children within five minutes from the house.

“As my kids got older, I coached them in sports. I coached hockey, football, baseball, soccer, lacrosse, ringette. Anything the kids were involved in, I was there. It was an extraordinary thing to get involved, because when you do, you become friends with the parents.”

When Liston was asked if there were any standout moments in all his years of volunteerism, he had difficulty identifying one or two.

“You tend to help groups. But I coached a group of 12-year-old boys playing hockey and now they’re 27 to 28 and they still call me ‘coach.’ It’s probably one of the greatest gifts in the world – when you run into them and they say, ‘Hi coach,’ and you talk about something you taught them and they’re using it in their adult life. That’s a gift beyond words.”

As part of the Paul Harris Fellow award, recipients receive a lapel pin, a certificate and a $1,000 donation to their charity of choice. Liston’s choice was Sport Central.

“I was raised in a family of six kids, but my parents were in a position to let me play sports, and I played a lot of sports. My best friends who I grew up with are still my best friends. To think that a child would not have the opportunity to play sports and not experience dressing rooms and teams and dugouts and all the ancillary things around sports – it’s stealing from them. I just love the thought of giving kids the chance to play sports.”

One of Sport Central’s success stories is a major reason for his deep commitment.

“We helped a young fellow who came out of a refugee camp. His family ended up in Edmonton with nothing. We gave this young fellow a bike. We gave him a soccer ball and kind of got him rolling. Well, his name is Alfonso Davies, and he’s probably the best 20-year-old soccer player in the world, playing for Bayern Munich in Germany. That’s what sports does. It gives kids a chance.”

Essentially, doing the right thing at the right time has enriched Liston’s life on multiple levels.

“We’ve gotten into a horrible place where we’re win-lose and we’re focused on a lot of challenges we’re experiencing right now. My experience has taught me that when you’re having a struggle, and you go help people, it puts your struggles into perspective. And so, I think service is quite selfish actually, because when you go serve, you end being the beneficiary as opposed to the giver. You are truly the taker.”