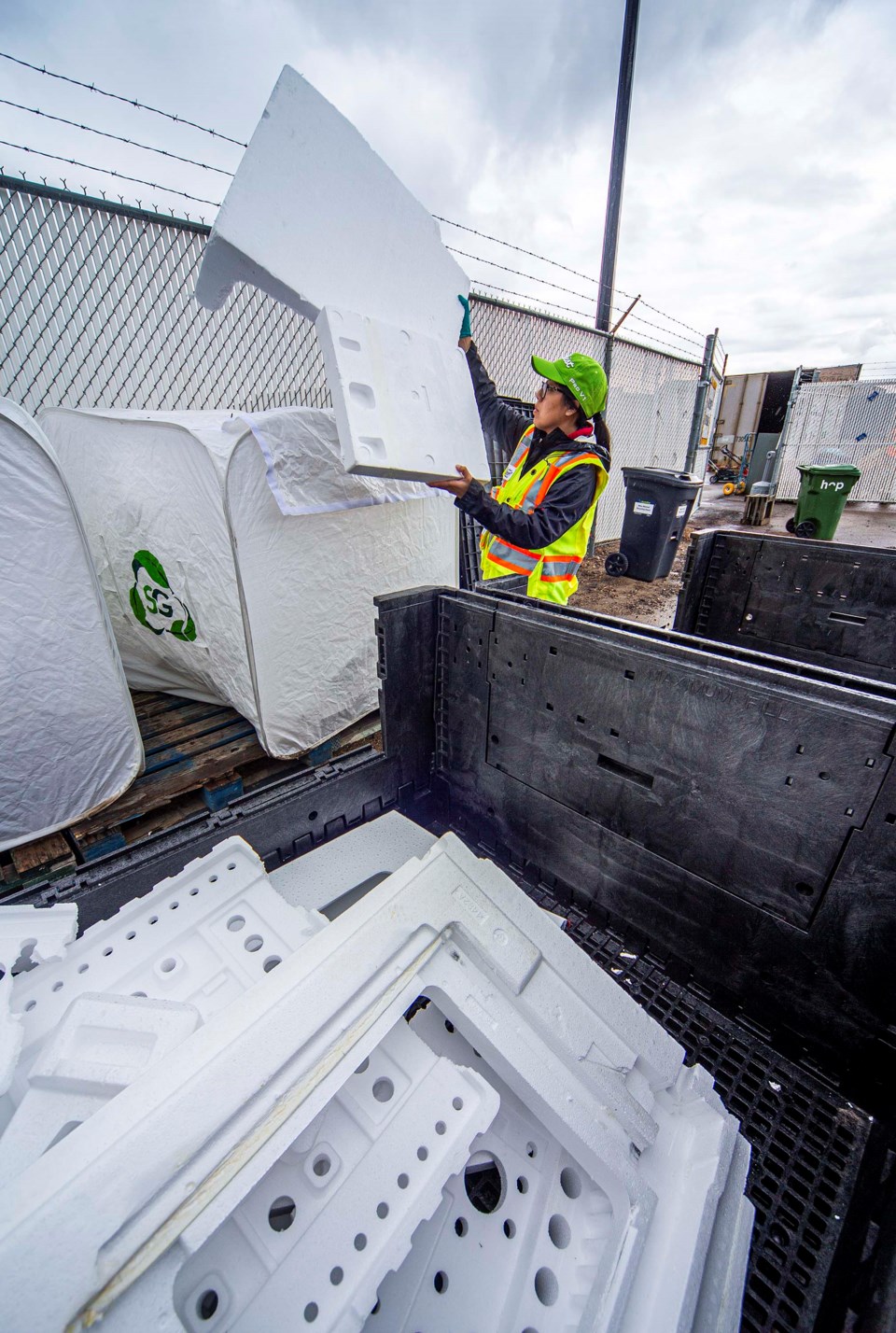 PRICE GOES UP — City council voted this week to keep its Styrofoam recycling program going despite reports that it had climbed in price. CHRIS COLBOURNE/St. Albert Gazette

Correction
This article previously said that London Drugs collects Styrofoam for recycling. While it does normally, it has stopped collecting recycling during the COVID-19 pandemic for safety reasons. The Gazette apologizes for the confusion.

St. Albert residents will have to pay about $2.60 more for Styrofoam recycling next year in part because of the coronavirus.

St. Albert city council voted unanimously June 1 to continue its Styrofoam recycling program despite a recent hike in its cost, and to cover that added cost through next year’s utility rates.

Administrators had recommended council cancel the program over the higher costs.

Council initially voted Feb. 18 to add Styrofoam recycling to the Mike Mitchell Recycling Depot for $8,000, with future years to be funded through utility rates after a pilot program at the depot diverted some 3,370 kg (roughly 2.4 Volkswagen Beetles) of Styrofoam from the landfill.

In a report to council, city utilities and environment director Kate Polkovsky said Styro-Go – the Calgary-based company running the Styrofoam recycling program – was set to roughly triple its processing fees this year. Styrofoam recycling would now cost $24,000 instead of $8,000 a year (about $1.08 per home, per year, or $0.09 per month) as a result. The city also has to make a one-time $15,000 upgrade to its Styrofoam storage site as the current one is not keeping the material clean.

In an interview, Styro-Go president Robert Herritt said he had to raise his rates in part because of the coronavirus pandemic.

“China’s the Walmart of the industry,” he said, accounting for about half the world’s Styrofoam demand, and it has cranked back imports of it since the pandemic started.

The market is now flooded with Styrofoam, which has sent its price crashing about 80 per cent relative to last year, Herritt said. His company has been operating at a loss for months as a result.

Herritt said this would likely be a temporary increase as he expects prices to eventually recover.

Polkovsky said St. Albert is one of a growing number of Edmonton-area communities offering Styrofoam recycling through Styro-Go (the only local firm that recycles that material). The service was “relatively popular” in St. Albert, with about three tonnes of material collected through it so far this year.

Council heard residents would have to fit their Styrofoam bricks into their brown carts or spend $2.25 for an additional bag-tag to dispose of them should this program be cancelled.

Coun. Sheena Hughes moved to extend the program and to pay for its higher costs through next year’s utility rates. Administration had proposed using reserves to cover the higher costs for 2020.

In an interview, Polkovsky said that utility rates will have to rise by $2.57 per home per year next year to cover the added cost of Styrofoam recycling in 2020-2021.

This program costs about nine cents a month and does not seem cost-prohibitive, Hughes said.

“This is something that’s brought value to people’s lives,” Hughes said, and has already kept huge volumes of waste out of the landfill.

City residents can drop off clean white expanded polystyrene (Styrofoam) blocks at the Mike Mitchell depot during its regular operating hours. London Drugs normally takes all forms of clean Styrofoam and many other recyclables, but has stopped doing so during the current pandemic.