St. Albert walkers trek every trail in the city

Susan Hamilton and Jory Groom set out to walk all of St. Albert's 99.9 kilometres of trails. They ended up walking 144.3 kilometers – and discovered hidden gems along the way.
Aug 13, 2020 2:00 PM By: Anna Borowiecki 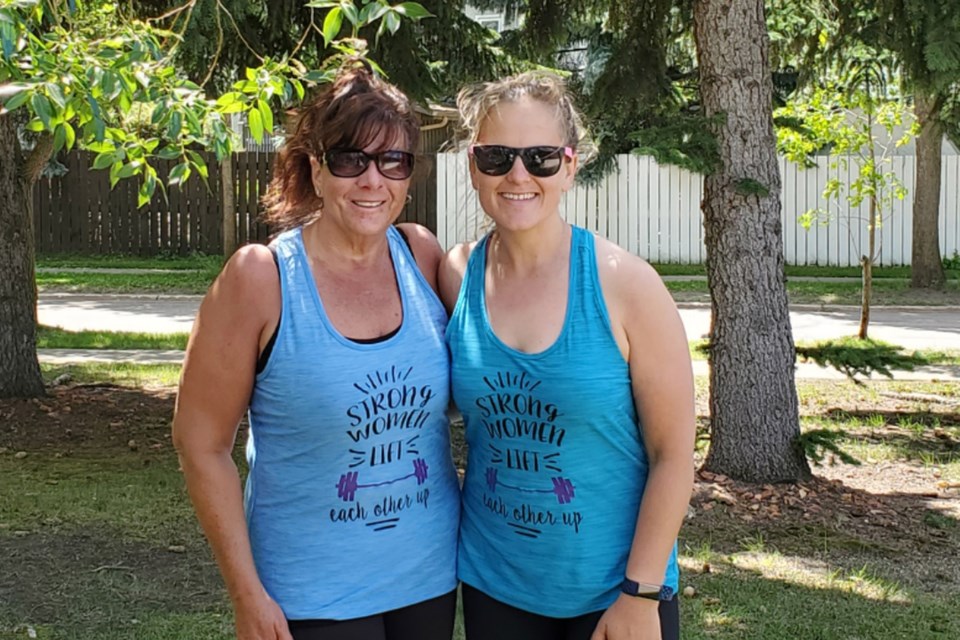 There’s a lot to be said for walking. It’s fun. It’s easy. You just put one foot in front of the other and go.

On the plus side, the two exercise buddies rediscovered the city with fresh eyes as they tapped into sights unseen.

But they also came across trail roads that didn’t exist, unexpected construction and flooded pathways forcing them to double back and adopt some creative navigating. Using a GPS and Fitbit to track distances, the duo calculated they actually hiked 144.3 km.

“It was important to hang out with a friend, connect with Sue and see what the community has to offer. And knowing we could do it was a bonus,” said Groome.

Back in April, during COVID-19’s first wave of social distancing, the decade-old friends brainstormed the idea of a recreational challenge.

They first met 10 years ago when Groome moved into Forest Grove Townhouses where Hamilton already resided. They hit it off immediately. Both were single mothers. Both loved dogs and shared a lifestyle that involved yoga, cardio and other assorted exercises.

“During COVID, the gym closed. We were both stuck inside and I needed an outlet. COVID was hard on all of us. That connection to people is so important and it was missing. We followed social distancing, but it was so isolating,” said Hamilton.

Groome, a health and wellness coach, discovered a citywide recreational trail system map. It was the perfect conduit for their pent-up energies.

The recreational pathways, the hub of which is the Red Willow Trail flanking Sturgeon River, loop through the city’s major parks, neighbourhoods and urban areas.

Instead of attempting one big trek, Groome and Hamilton divided the challenge into 17 smaller loops. The plan was to start small and dial up slowly. The inaugural target took place May 1 with a casual 4.2-km loop around Poirier, Campbell Park and Sir Winston Churchill Rd.

Both agree they were mesmerized walking along the 8.6-km trail starting from St. Albert Place and ending at Heritage Lakes.

“All of a sudden you were in the forest. It was a hidden gem,” said Hamilton.

Groome added, “There were these little creeks, lush trees, bushes and lots of nature. And down by the river, it was absolutely gorgeous. People were kayaking, having a picnic, riding bikes and sun tanning.”

One of the challenge’s big revelations was the discovery of a foot bridge across Sturgeon River leading to Oakmont. It is located north of St. Albert Botanic Park.

“I’ve lived here for so long and never knew it existed,” Groome noted.

Delightful surprises popped up along many routes. In Erin Ridge, a resident decorated his fence using a cluster of whimsical birdhouses. At Legion Ball Diamond, they spotted a wall painted with a series of handprints and a slogan stating, “Together we make a difference in our community.”

Lacombe Park Lake was stunning and the two walkers stopped a minute to pay their respects at the Const. David Wynn Memorial, a massive boulder that represents his RCMP career, family and community legacy.

Their last walk on July 14 was a 26-km loop around the city, a full half-marathon.

Hamilton, who lost some COVID weight, added: “I encourage everyone to try it. Any level of fitness can do it, if you put your mind to it. If you split the trails, it’s achievable and you don’t need specialized equipment.”

Since the duo finished exploring the trail system, their next challenge is the St. Albert Neighbourhood Challenge. They plan to walk every neighbourhood in the city starting alphabetically.