There are few things in life more difficult than watching a loved one struggle with a debilitating condition that prevents them from doing the things they love. So when St.
0
Feb 27, 2015 11:00 PM By: St. Albert Gazette 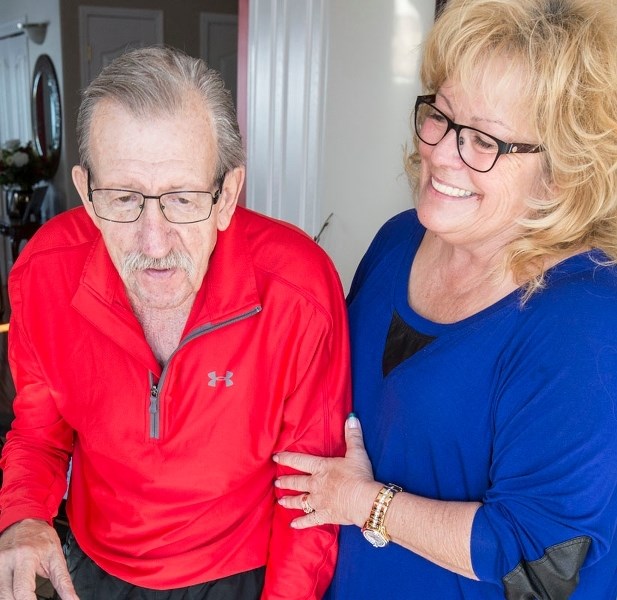 There are few things in life more difficult than watching a loved one struggle with a debilitating condition that prevents them from doing the things they love.

So when St. Albert resident Art Rechlo, 77, walked away from his wheelchair and began eating on his own after undergoing a stem cell treatment in Mexico, his family was understandably ecstatic.

“I got so much of him back that we had lost, that I thought we would never see again,” his wife Vicky said.

The two met 20 years ago bowling, and were married a few years later. They shared a common interest in all kinds of physical activities – bowling, golfing, camping and travelling – when Art wasn’t busy running his two personnel services companies.

That began to change when Art was diagnosed with Lewy Body Dementia, a degenerative neurological conditions similar to Alzheimer’s and Parkinson’s, in 2007.

“We were devastated. He was devastated,” Vicky said. “Just knowing it’s something that progresses, and he had just lost a friend to dementia. It was very upsetting.”

Treatment in Alberta included a prescription for drugs to help control the symptoms, and the hallucinations associated with Lewy Body Dementia in particular. She said the drugs seemed to work at first, but eventually Art got more and more lethargic.

It wasn’t until a neighbour told her to read the sports section in the newspaper and she read about how hockey legend Gordie Howe had undergone a stem-cell treatment with positive results.

Vicky looked into it a bit further, but it wasn’t until doctors told her Art would have to have a feeding tube inserted that she decided to take immediate action and with the help of Art’s daughter booked an appointment.

Art underwent treatment Feb. 5 with Abel Pena, a biochemist, with the Nova Cells Institute of Mexico at a hospital in Tijuana, for a cost of $19,000 plus airfare and hotel.

“It was worth every penny,” Vicky said.

The treatment itself was relatively straightforward. After taking blood pressure, an electrocardiogram and a blood sample, an IV drip was set up and Art was given a medicine called “Beacon Factor,” which Pena invented, followed by an injection of stem cells into his spine.

The reaction was almost immediate. Within an hour, some of the physical signs of Art’s ailment had begun to disappear.

The next morning Vicky was disappointed to find Art was still choking when trying to eat or drink, but the disappointment quickly dissipated when she took him out for a walk in his wheelchair and he got up out of the chair to push it.

“Towards the end he didn’t even want to sit any more, he just wanted to stay out of the chair,” she said. “That would have been only about 15 hours after the treatment.”

They sat down for lunch, and after months of struggling to eat and drink, Art picked up his chamomile tea with honey and drank it, so Vicky suggested he try a bite of his caregiver’s soup.

“He just loved it. He just grabbed the bowl and ate like there was no tomorrow,” she said. “Then he had two tiramisu, and we just haven’t looked back. He’s been eating and drinking and walking.”

It often takes a week or two for the physical symptoms to begin to turn around, so it’s unusual to have seen results so quickly.

“With Art, his turnaround was within hours, actually. He was brought in about two o’clock, and I think by the morning he was already trying to walk and trying to eat,” she said.

Odgers-Pena explained the treatment Nova Cells uses is two-fold. There is an injection of stem cells into the spine, as well as administering the Beacon Factor medicine through an IV.

The cells themselves are sourced from umbilical cords as opposed to using fetal tissue, which has been a controversial method of harvesting stem cells. The donors are tested for a wide range of blood-borne diseases, as is the sample of the cord itself.

As for the Beacon Factor, Odgers-Pena said her husband invented the product, which is basically the same kind of stem cells taken from an umbilical cord but processed in a different way to help enhance how quickly and effectively the stem cells work.

“He processed it in a way that the signals we send out when we’re hurt or there’s damage, it’s amplified so the stem cells can find it faster and start to repair,” she said.

Odgers-Pena said the Nova Cells Institute has been around for about six years, and in that time has treated “many” patients, although she didn’t provide a number. Conditions they treat include Alzheimer’s and other forms of dementia, cancer, spina bifida and epilepsy.

They contract with several hospitals in Mexico where they perform the procedures, including in the cities of Tijuana, Guadalajara and Mexico City.

Vicky said she was nervous about the prospect of going to Tijuana for treatment, based on popular perception of the border city of three million people.

“I have to admit we were nervous, because you hear the stories,” she said. “People have this opinion about Mexico like they’re backwards, but they’re not. They’re very advanced. The nurses were great and the hospital was spotless.”

After watching her husband’s condition deteriorate over the past several months, she said she was willing to give it a shot if there was a chance to get back the man she fell in love with.

“It was like, pinch me. I just can’t believe it,” she said. “I got so much of him back that we had lost, that I thought we would never see again.”

She acknowledges there is still much work to do – she plans to get Art into the Glenrose Rehabilitation Hospital to build up some of the muscles that have deteriorated – but she is convinced of the potential of stem cell treatments.

Vicky said it’s frustrating to know this kind of treatment isn’t available in Canada right now, and questions why.

“We have babies; we have umbilical cords,” she said. “The technology is there, so why is it not here? If this can reverse the damage that’s been done, how is it wrong?”

Timothy Caulfield, a health law research at the University of Alberta, said there are a few areas where clinical therapies using stem cells already exist. For example, some types of blood cancers can be treated and there is some limited use for skin grafting – and there is a lot of potential in the future for stem cell treatments, but further research is required because as yet, there are very few proven applications.

He said many of the out-of-country clinics offering stem-cell therapy are based on testimonials, which should never be taken in place of peer-reviewed scientific research.

“When people feel like they’ve responded to a particular therapy, who knows what’s going on? Who knows what caused them to feel better? It’s very difficult to know unless you’ve done an appropriate clinical trial,” he said.

Caulfield said he’s been passionate about the potential of stem cells since the late 1990s, and since then has worked with many of the foremost experts in the field. The evidence for these therapies just simply isn’t there.

“Where’s the peer-review data to establish the claims? It’s nowhere,” he said. “What are these clinics doing that the most world-renowned researchers aren’t? What have they figured out around this incredibly complex biology that the best researchers in the world haven’t been able to figure out?”

He added there can be many risks involved with these unproven therapies, as well, as some can involved very invasive procedures that carry risk of infection – not to mention the cost.

Caulfield has worked to help produce a booklet outlining what he says patients should know when considering this kind of treatment, which is available online at bit.ly/scnpatientbooklet. But the bottom line is he’s skeptical and argues others should be, as well.

“People should be genuinely skeptical when they hear about stem cell therapies being offered, particularly for complex diseases we’re still trying to figure out,” he said.

Dr. Darryl LaBuick, a family physician in St. Albert, said he’s not familiar with all of the stem-cell research going on at the moment, but patients do ask him about different kind of alternative treatments in different countries, including stem-cell therapies.

He said it’s understandable when patients are facing serious and life-threatening conditions to want to pull out all the stops and take every possible action, but urges caution.

“It’s a measure that’s naturally done by patients and families that you want to try to do absolutely everything you can for your loved one, and unfortunately there’s a number of different places in the world that are more than willing to take your money and offer you false hope,” he said.

Vicky said she understands the skepticism around some of the alternative treatments available, but in this case seeing her husband get up out of his wheelchair by himself and eat lunch without the help of an aide is all the proof she needs – and she wants everyone to know it.

“I would do it again, and I’d tell people don’t be afraid,” she said. “There’s more than just Gordie Howe who can get up and just walk away.”