You can't teach an old dog new tricks, so the saying goes. Nobody said anything about teaching them fox tricks. Locally raised author Lindsey Carmichael wants to show you and your furry friends exactly what she means.
Aug 28, 2013 12:00 AM By: Scott Hayes 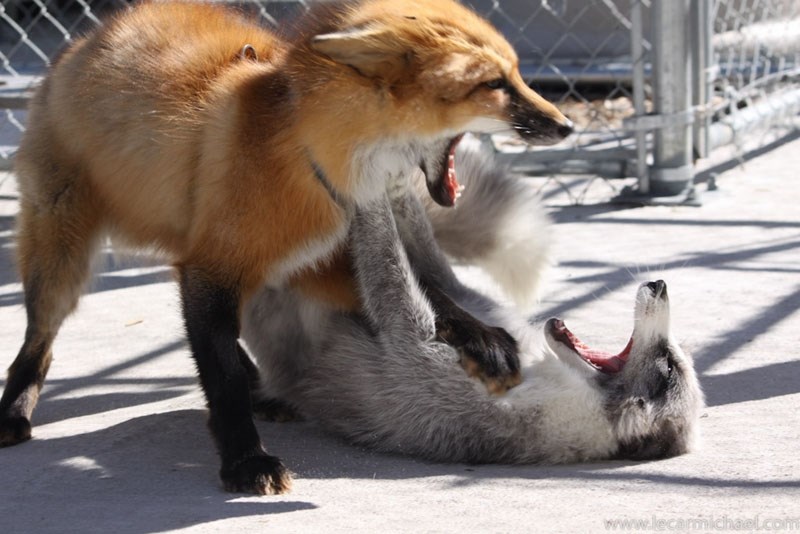 You can't teach an old dog new tricks, so the saying goes. Nobody said anything about teaching them fox tricks.

"It's been a very busy year for me," she said, referring not just to her new book, but also to the other book – Gene Therapy, part of the Medical Marvels series for teens – which she also just published in August. Then there's the publicity tour that will take her through St. Albert this weekend.

"At one point, I was working on three different books and I had a day job, which I will never do again," she laughed.

Fox Talk was extrapolated from some of the work she did in her PhD thesis on ecological genetics of northern wolves and arctic foxes. That dissertation on wildlife population genetics won her the Governor General's Medal from the University of Alberta. For that, she studied Northern Canada's wolves and Arctic foxes by using DNA fingerprinting to understand how they moved from area to area, and how different factors like landscape and prey affected them.

The new book explores the links between these wild creatures animals and the people who have domesticated them.

"In terms of their behaviour towards people, these foxes are as tame as dogs – they love to be petted, they ask for love. But they're still foxes, and they have unique behaviours," she explained. "They're a lot like Border collies. They need a job – they're busy, energetic and curious, but they can be destructive if they're bored."

She will also be hosting a book signing at Chapters from 2 to 4 p.m. this Saturday. The store (located at #30 - 445 St. Albert Road) is familiar ground for her as it was her place of employment while she still lived in the city.

She'll have copies of Fox Talk along with copies of her other books including Gene Therapy, part of the Medical Marvels series for teens. That book was also just published this month. It covers the history and development of this fascinating science, and includes the most recent information on the state of the field. Her complete library covers scientific topics like migration, hybrid cars and the scientific method. These books are more suited for readers in Grades 1 through 5.

Come, sit and stay for a fun event

In addition to the signing, Carmichael will pop by Paradise Pets on Sunday for an educational experience unlike any other. She's calling it an interactive communication experiment for kids and their dogs. It all starts with the common knowledge that people and dogs can talk to each other.

She said that it's more interesting to scientists to understand how dogs acquired the ability. Recent research with Siberian domesticated foxes has started to come up with some answers. She first found out about the experiment in 2000 and has wanted to write about foxes ever since.

"The experiment was designed to understand the evolutionary process of domestication. What we've known since before Darwin's time is that domesticated animals have a lot of physical characteristics that are in common with each other but not in common with the species that they came from."

She elaborated that domesticated dogs, cats, pigs and horses all have floppy ears whereas elephants are the only wild animal species that has them.

"I love going down little rabbit trails hunting for information I think people will love. Writing for kids reopens my eyes to how fascinating the world is – it's an amazing, incredible place, and there's no excuse for boredom. There are so many things to get kids excited about," she said.

"I've wanted my own pet fox since I first read about them in graduate school and I feel very fortunate to be able to share their stories with kids."

One of these stories explores foxes' ability to understand human pointing gestures, even without prior training. During the experiment at Paradise Pets, she will show kids how to replicate this with their own dogs by putting canine communication skills to the test.

For the store, the event has a more important undertone for owner-pet relations.

In a prepared statement Adrian Theroux, the general manager at Paradise Pets, said, "Having a dog as a part of your family can be the most enjoyable and rewarding experience if you can understand how to communicate with them and have the ability to interpret what they are telling you. Your dog will listen to you because it made the decision to and understands the leadership you are giving."

During the event, Steve Gendron of Perfect Place Kennels will also teach kids how to apply communication techniques to the practical problem of pet training.

"Kids will learn how to convince their dogs that they have the leadership skills to successfully lead and protect their family, or pack," Gendron said. "This will be accomplished from a teacher's perspective," he explained.