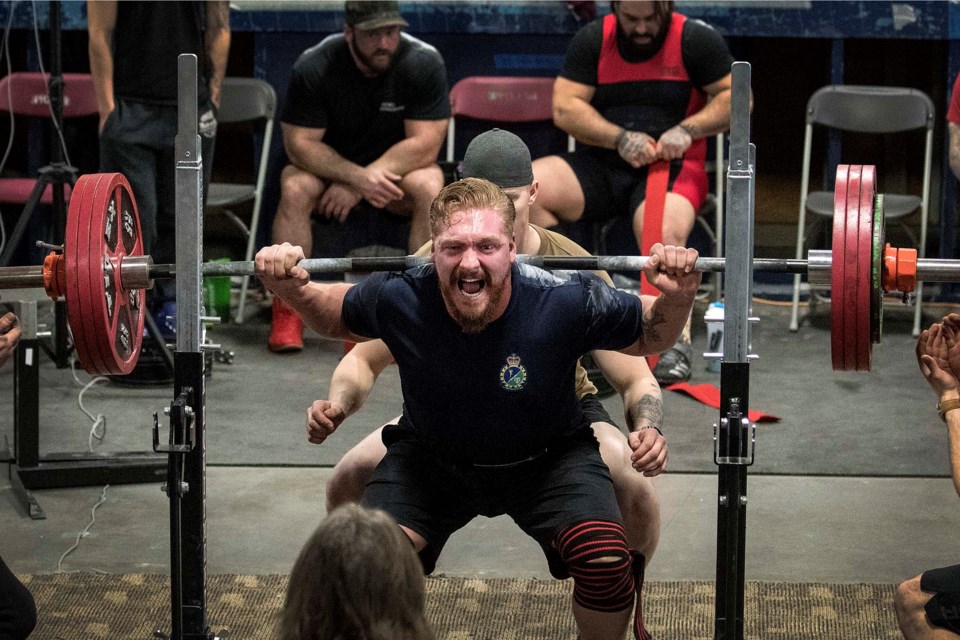 RAR! – Cpl. Zachary Lavalee-Fequet lifts 200 kg during the squat lift portion of the powerlifting competition during Strong Contender 2019. Powerlifting will once again be featured in this year's Strong Contender, which starts Monday. DAN RIEDLHUBER/St. Albert Gazette

St. Albert and Sturgeon soldiers will trade the battlefield for the sports arena this week as they compete to see who’s the strongest contender of them all.

About 1,000 soldiers at CFB Edmonton will hit the ice, gym and court this Monday through Friday for Exercise Strong Contender.

The worst-performing unit traditionally gets stuck organizing the event next year, noted organizer Lt. Colin Marsh of 1 Service Battalion. His unit actually placed second last year, but agreed to be the organizer again as so many units were busy preparing for overseas missions.

“The whole purpose behind it is to really bolster that esprit de corps amongst the units,” Marsh said of Strong Contender, and to build the teamwork and physical fitness soldiers need in the field.

“It definitely comes down to bragging rights.”

Edmonton’s Cpl. Norman Moores is back for his third or fourth Strong Contender with 1 Service Battalion, competing in tactical athletics.

“Tactical athletics is essentially glorified circuit training,” he said, except with a military twist.

Athletes may have to scale walls or ropes, push heavy sleds, sling sandbags or sprint across the gym, either as many times as they can or all in a row as part of an obstacle course, Moores said – all tasks they might have to perform in combat. It's a team event, with four men and one woman per squad.

“I’m a bit of a jack of all trades,” Moores said, when asked if he had a specialty, but at 220 pounds of mostly muscle, he’s probably more strong than fast.

The tactical athletics tournament typically ends with a 25-minute obstacle course, the layout of which is kept secret from the participants until the event starts, Moores said.

“We have no idea what’s going to happen until we get pulled out of the back room and go to the field house.”

Moores said his unit was looking to beat its rivals in infantry squads such as 3 PPCLI, who often have more time to exercise than mechanics like them. On competition day, though, everyone will be cheering each other on regardless of what team they’re on.

“We’re all a bit twisted and we all like to push ourselves,” he said, and they all love a good workout.

Moores encouraged guests to come out to Strong Contender events to cheer the troops on.

“The louder people are, the better we do.”

Opening ceremonies for Strong Contender are at 7:30 a.m. Jan. 13 at the Edmonton Garrison Twin Rinks Arena. Competitions will happen at venues throughout the base from Monday to Friday. Visit strongcontender.ca for times and locations.